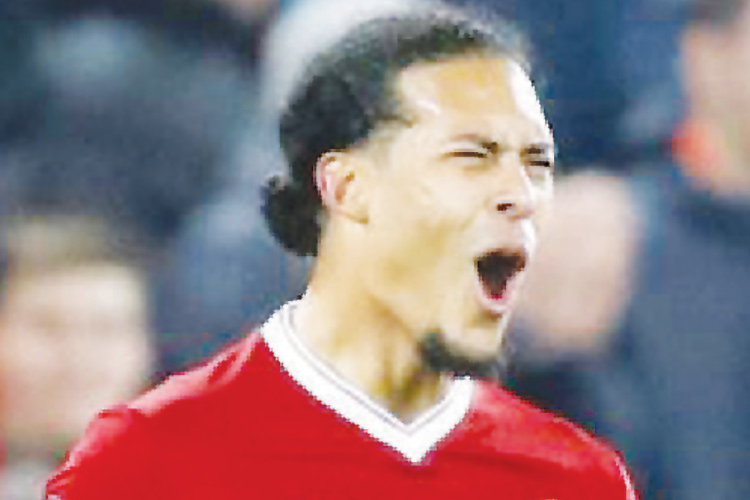 Liverpool: Liverpool’s attacking power kick-started their challenge for a first English title in 29 years, but with the finish line in sight, the focus is on a rock-solid defence led by Virgil van Dijk as Burnley visit Anfield on Sunday.

The arrival of Van Dijk in a £75 million ($97 million) transfer from Southampton was met with scepticism in some quarters 15 months ago, but the Dutch star’s imperious form quickly quietened such concerns.

This season, in particular, the durable centre-half -- Liverpool’s only outfield ever-present in the Premier League -- has been particularly outstanding.

His high-level displays have been crucial for Liverpool in recent weeks as his attacking team-mates have, by their previous standards, failed to hit the heights of months gone by.

Watford were swept aside 5-0 at Anfield at the end of last month, but those goals were the only ones scored by Liverpool in a spell that has featured goalless draws with Bayern Munich, Manchester United and Everton.

The Merseyside derby saw van Dijk in formidable form, an indication of his importance to the team as the forward line of Mohamed Salah, Sadio Mane and Roberto Firmino struggled for form.

Van Dijk, 27, is a pivotal figure for Liverpool as they prepare for the Burnley fixture.

Liverpool’s defence has struggled with injuries to key personnel, aside from van Dijk this season, with the loss of Joe Gomez, coincidentally against Burnley when his side won 3-1 at the start of December, a particular loss.

The young England international had emerged as an important figure in Klopp’s back four prior to suffering a fractured leg, although the fact he returned to running in training on Thursday suggests he could be in contention for the meeting with Tottenham at the end of the month.

Five consecutive clean sheets have kept Liverpool in contention in the Premier League, with West Ham’s Michail Antonio the last player to score against Reds keeper Alisson Becker 512 minutes ago. The 27-year-old’s composure, distribution, tackling, heading and experience have all been hugely impressive at a time when other senior stars are struggling for top form.

Meanwhile, Manchester United, after the miracle of Paris, have no time for a hangover when they travel to Arsenal on Sunday if their chances of even qualifying for next season’s Champions League are not to suffer significant damage. Should United repeat their 3-1 success at the Emirates in the FA Cup six weeks ago, Ole Gunnar Solskjaer will rack up a perfect 10 away wins since taking caretaker charge to make a seemingly irrefutable case to be handed the job on a permanent basis.

The highlight was beating free-spending Paris Saint-Germain 3-1 in dramatic circumstances on Wednesday to progress to the quarter-finals of the Champions League on away goals and erase the consequences of Solskjaer’s only defeat in 17 games in charge.

United have made up an 11-point gap to the Premier League top four under the Norwegian, but their Champions League status for next season is still far from assured.

The Red Devils lead Arsenal by just a solitary point and a two-point advantage over sixth-placed Chelsea could be wiped out by the Blues’ game in hand at home to Brighton.

Momentum is on United’s side, but they face a far tougher run-in than the Gunners with title chasing Manchester City and Chelsea still to visit Old Trafford.