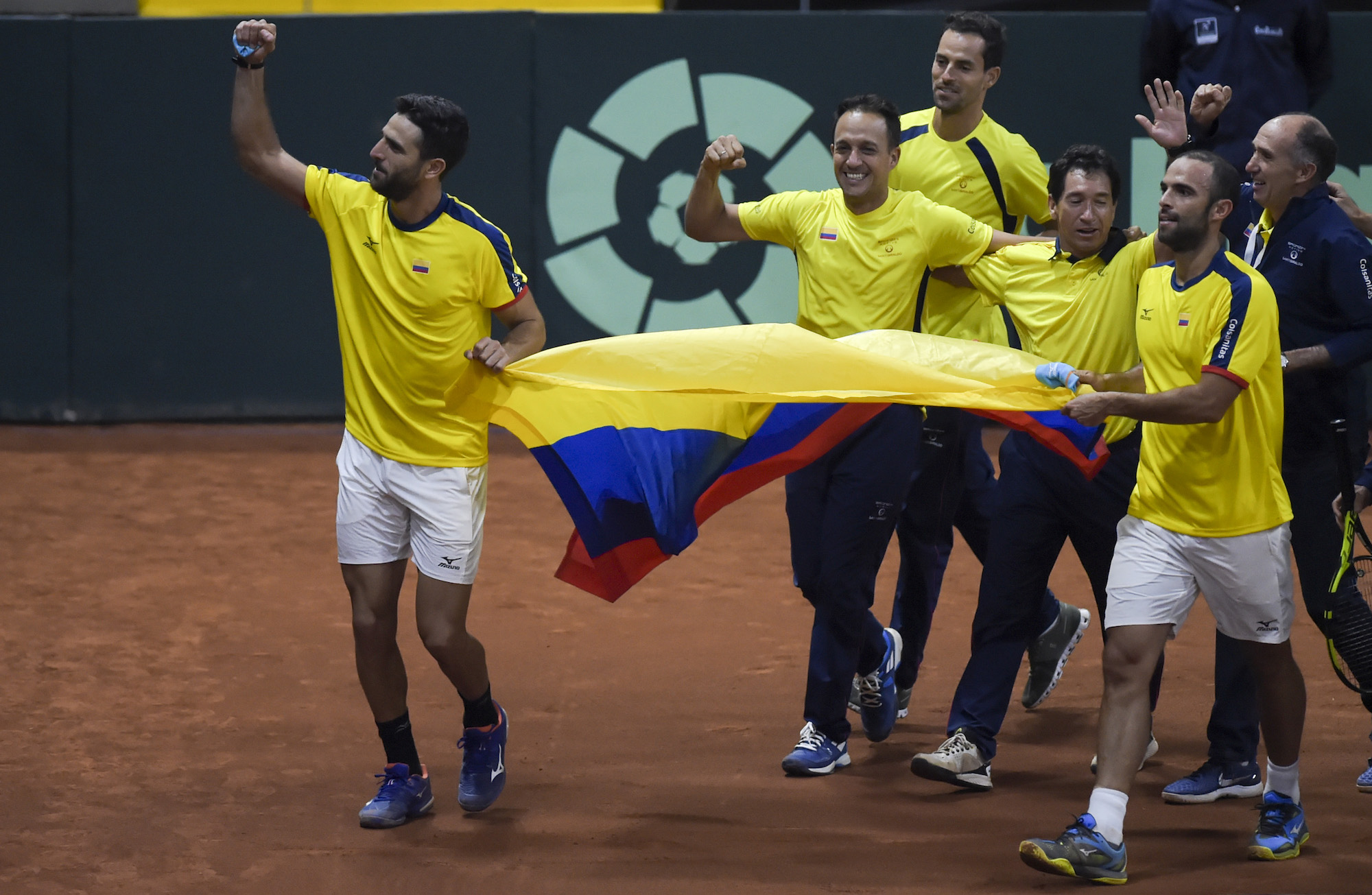 Paris: Former champions Serbia, Germany, Australia and Italy punched tickets to the new-format Davis Cup finals on Saturday while Colombia silenced seven-time winners Sweden to earn a shot at the trophy at their 51st attempt.

Since 1959 the determined South Americans have tried but failed to make it through to the finals.

But half a century of heartache was forgotten when Juan-Sebastian Cabal and Robert Farah clinched the doubles to give them an unassailable 3-0 lead over Sweden to jubilant scenes in Bogota.

Alejandro Gonzalez swept aside Elias Ymer 6-3, 6-3 to win the tie 4-0, with the fifth rubber unplayed.

Joining them in November's revamped finals in Madrid are Serbia.

Without Australian Open champion Novak Djokovic, Serbia watched their 2-0 overnight lead evaporate in Tashkent as Uzbekistan roared back to send their clash to a fifth rubber.

Denis Istomin partnered Sanjar Fayziev to a 2-6, 6-1, 6-3 win over Nikola Milojevic and Viktor Troicki in the doubles before he downed Dusan Lajovic 6-3, 6-4 in the singles.

But Filip Krajinovic picked up the decisive point by coming from behind to beat world number 280 Sanjar Fayziev 4-6, 6-3, 6-0.

Germany, who won the last of three titles in 1993, eased to victory over Hungary as Jan-Lennard Struff and Tim Puetz strolled to a 6-2, 6-3 doubles triumph to seal an unassailable 3-0 advantage.

Third-ranked Alexander Zverev cruised to a 6-3, 6-4 win over Gabor Borsos and Philipp Kohlschreiber beat David Szintai in three sets to make it a 5-0 whitewash in Frankfurt.

Australia romped to a 4-0 rout of Bosnia and Herzegovina in Adelaide, as John Peers and Jordan Thompson clinched the tie with a 7-5, 6-1 defeat of Mirza Basic and Tomislav Brkic in the doubles.

"After a long summer, it's not easy for a lot of these boys, but they did absolutely everything we asked of them, to come and do all the hard work on the practice court and I'm just really thrilled that they got the result they deserved," Australia captain Lleyton Hewitt told the Davis Cup website.

Andreas Seppi guided Italy into the finals after the 1976 champions dispatched India 3-1.

Seppi brushed aside India's number one Prajnesh Gunneswaran 6-1, 6-4 in the first reverse singles tie on Kolkata's grass court after India avoided a whitewash by taking the doubles.

Italy, who had led 2-0, overnight were forced to extend the encounter after Simone Bolelli and Matteo Berrettini lost to Rohan Bopanna and Divij Sharan 6-4, 3-6, 4-6.

In Bratislava, Canada took the concluding reverse singles to see off Slovakia 3-2.

Canada's Denis Shapovalov and Felix Auger-Aliassime had lost the doubles, but Shapovalov bounced back to overcome Martin Klizan and level the tie at 2-2, with Auger-Aliassime prevailing in his winner-takes-all showdown with Norbert Gombos.

The 2014 champions Switzerland, missing both Roger Federer and Stan Wawrinka, fell 3-1 to Russia.

Unheralded Swiss duo Henri Laaksonen and Jerome Kym had kept their nation's hopes alive with a 4-6, 6-3, 7-6 (7/1) win over Evgeny Donskoy and Andrey Rublev to trim Russia's lead to 2-1 in Biel.

But Karen Khachanov defeated Laaksonen in three sets to secure the win for Russia who last won the competition in 2006.

Also making it into the finals were Belgium, 3-1 winners in Brazil, and Chile, who fought back from 2-1 down to topple Austria 3-2.

Earlier, Japan rallied from a 2-1 deficit as Taro Daniel won the decisive rubber to overcome China.

Kazakhstan are also through as Mikhail Kukushkin completed a 3-1 victory over Portugal by swatting Joao Sousa aside 6-4, 6-1.

Under the new format adopted by the International Tennis Federation, the Davis Cup will be decided at a season-ending 18-team event on November 18-24.

Rubbers are now played in a best-of-three-set format, replacing the long-used best-of-five, with the reverse singles matches played on Saturday after the doubles, shortening the ties from three days to two.

The 12 winners in qualifying this weekend will join automatic qualifiers Croatia, France, United States, Spain, Argentina and Britain in November's finals in Madrid.