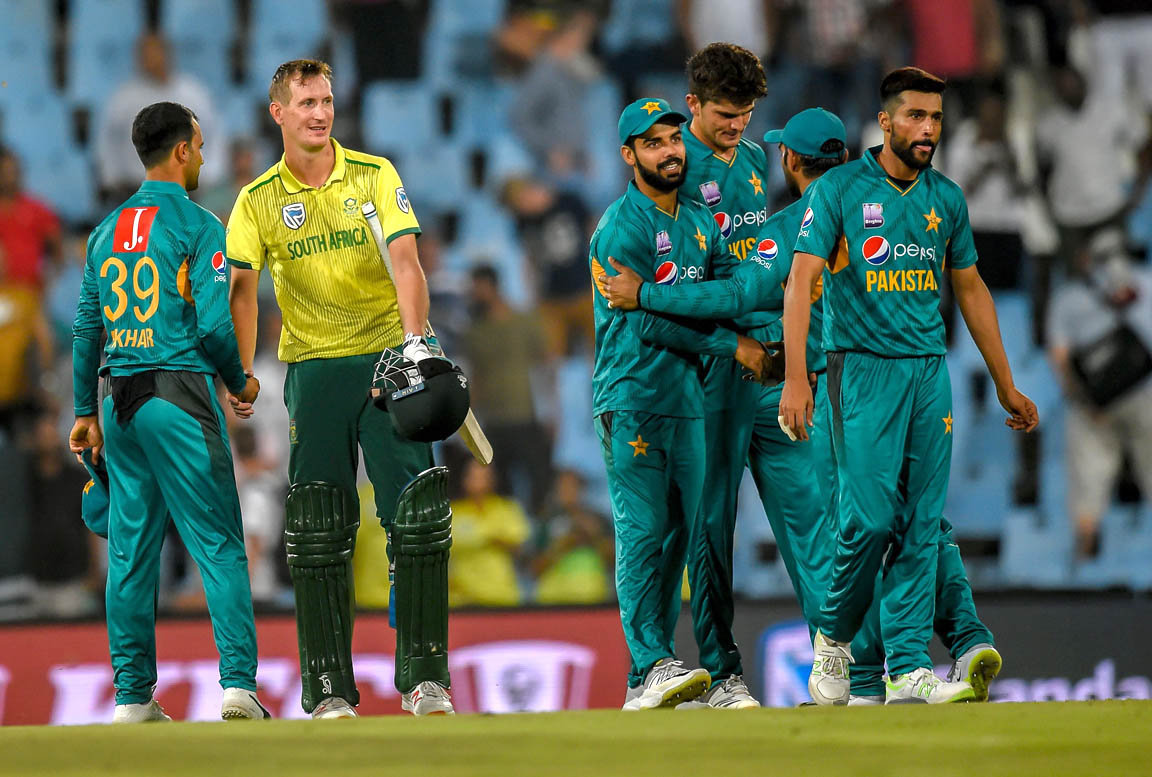 Pakistan's Mohammad Amir (L) is congratulated by South Africa's Chris Morris (C) after winning the 3rd T20I cricket match between South Africa and Pakistan at the SuperSport Park Stadium in Pretoria on Wednesday.

CENTURION (South Africa): Pakistan finished their tour of South Africa with a 27-run win in the third and final Twenty20 international at SuperSport Park on Wednesday.

The tourists owed their win to the new-ball bowling of left-arm spinner Imad Wasim and left-arm fast bowler Shaheen Shah Afridi as they defended a moderate total of 168 for nine.

The pair restricted South Africa to 30 for two in the first seven overs and the hosts were always behind the required rate as they limped to 141 for nine in their 20 overs.

South Africa won the series against the world's top-ranked Twenty20 international team 2-1, adding to a 3-0 success in a three-match Test series and a 3-2 win in a five-match one-day series.

"Tonight was disappointing but we're really chuffed with a series win against the best T20 team in the world," said South African stand-in captain David Miller. "We've beaten them with a young side. There's a lot of depth in South African cricket."

"A win is always something that gives you satisfaction," said Pakistan captain Shoaib Malik. "Our youngsters have learnt a lot from this tour and we played really good white-ball cricket."

Left-arm opening bowler Beuran Hendricks took a career-best four for 14 as Pakistan's batsmen struggled after being sent in.

A mid-innings collapse when three wickets fell for five runs in nine balls reduced Pakistan to 94 for five, with Rizwan, Malik and Hussain Talat falling in quick succession. Malik was run out for 18 after a mix-up with Talat.

Shadab Khan hit three sixes in the final over from Andile Phehlukwayo to finish with 22 not out off eight balls. He took two wickets in South Africa's innings, including the key wicket of Miller, and was named man of the match. Miller was the man of the series.

South Africa never recovered from their slow start despite innings of 41 by Rassie van der Dussen and an unbeaten 55 off 29 balls by Chris Morris.

Mohammad Amir followed up the tight bowling of Imad and Afridi to take three for 27, while Shadab and Faheem Ashraf took two wickets each.