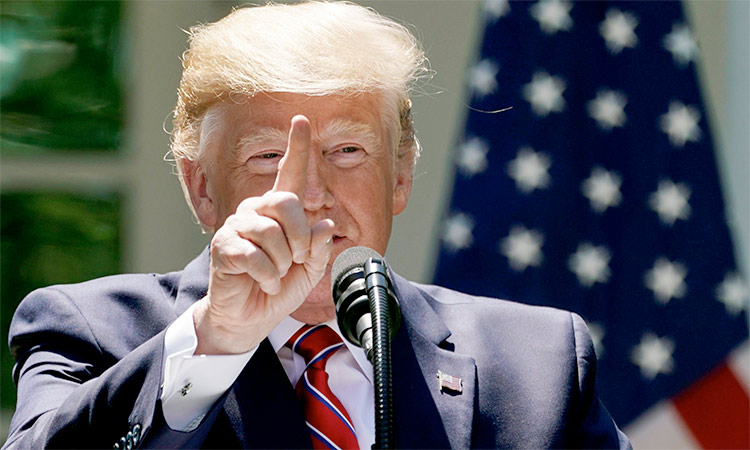 Donald Trump speaks during a news conference at the White House. File/ Reuters

President Donald Trump’s last-minute decision to cancel a planned military strike on Iran has exposed a deep-running rift in the Republican Party between foreign policy hawks and those hewing to the president’s “America First” vow to withdraw from foreign wars.

Rep. Adam Kinzinger, an Illinois Republican and an Air Force pilot, said it was a “mistake” for the president to call off a strike on Iranian facilities Thursday after that country downed a US Navy drone. The lawmaker said the reversal risks undercutting Trump’s credibility and making him look weak.

“It’s definitely a hit to the credibility,” Kinzinger said in an interview Friday. Kinzinger said he is judging Trump’s decision by the same standard he used to criticise President Barack Obama’s decision to cancel a 2013 strike in Syria intended as punishment for using chemical weapons.

South Carolina Sen. Lindsey Graham, a close Trump ally, expressed a similar sentiment, tweeting that while he appreciated Trump’s “desire to be measured and thoughtful,” the US should make Iran’s pursuit of nuclear weapons a “red line.”

On the other hand, Rep. Matt Gaetz, a Florida Republican solidly on board with Trump’s “America First” foreign policy, praised the president’s decision not to carry out the strike, calling Trump a “very different kind of Republican.” Gaetz said Trump is “somebody who wanted to end wars, not start them.” “He is utilising appropriate caution,” Gaetz said. “That doesn’t mean that we’re going to allow the activities of Iran to go unanswered, but it doesn’t mean we have to start a multi-decade war.”

Gaetz dismissed arguments by some of his colleagues that this was the same as Obama not enforcing his red line against chemical weapons in Syria.

Sen. Rand Paul, a Republican from Kentucky, said in a tweet that he has encouraged the president to “avoid another war” and to ignore his more bellicose advisers.

Staking out these positions put Paul and Gaetz closer to their Democratic colleagues, who were largely relieved that Trump didn’t allow the attack to proceed as planned, even as they criticised him for pulling out of Obama’s 2015 Iran nuclear deal and for lacking a clear strategy for dealing with the country.

“What we need from the president is the development of a coherent and effective strategy for dealing with Iran and to articulate that to the Congress and to the American people,” said Rep. David Cicilline, a Democrat from Rhode Island and a member of the House Foreign Affairs Committee.

“We don’t have to retaliate,” said Gallego of Arizona. “We can increase diplomatic and economic sanctions. We can also try to find some other ways to send a signal that this is not acceptable.”

Lawmakers were divided somewhat along party lines on whether the president would need to seek congressional approval for any military action.

House Republicans largely defended the president’s ability to take military action to protect US interests without congressional authorisation, while Democrats asserted that the president would need to come to Congress first. Leaders from both parties met with the president at the White House Thursday.

“During our meeting with the president at the White House, congressional Leaders stressed the necessity that we work with our allies and not strengthen the hand of Iran’s hard-liners,” said House Speaker Nancy Pelosi. “Democratic Leaders emphasised that hostilities must not be initiated without the approval of Congress.”

Senate Minority Leader Chuck Schumer called on Majority Leader Mitch McConnell to allow a vote next week on an amendment that would defund any unauthorised attack on Iran.

Underlying this debate is a dispute over the 2001 “authorization for the use of military force” — or AUMF — that Congress passed to endorse military action in Afghanistan days after the Sept. 11 attacks. Presidents have invoked it to justify interventions abroad ever since.

That debate is playing out in real time, much like the president’s tweets about his decision to pull back the raid. On Wednesday, House members passed an annual defense funding bill with a provision sponsored by Democratic Rep. Barbara Lee that would repeal the AUMF. The Republican-controlled Senate is likely to strip out the provision when it acts on the defense measure.

There’s also concern among Democrats that Trump’s advisers, including national security adviser John Bolton, an Iran hawk, would continue to press for military action that they fear could lead to war.

“Iran was complying with the nuclear deal when he pulled out over the objections of anyone who knows anything about the Middle East or nuclear issues,” Brian Schatz, a Hawaii Democrat, said on Twitter. “This is a crisis made by Donald Trump. And John Bolton.”

Democratic Rep. Adam Smith, the chairman of the House Armed Services Committee, said it was apparent the Trump team hadn’t thought through the strategy to put “maximum pressure” on Iran, and what might happen if Iran didn’t simply succumb to sanctions pressure.

“We talked in great depth about what they felt the appropriate response would be,” Smith said of Thursday’s White House meeting. “The president was really wrestling with it. He wasn’t sure what the right thing to do was. He was asking his advisers, ‹What do you think?’”

Even some Republicans were unsettled by what appeared to be an improvised response to Iran shooting down the US drone earlier this week. Some of them urged Trump to avoid action that would lead to unintended escalation.

Rep. Michael McCaul, the ranking Republican on the House Foreign Affairs Committee, said that while the US still needs to have a “measured, proportionate response” for the downing of the drone, the president likely didn’t want to create a situation that would galvanize support for Iran’s leadership.

“It was a probably more thoughtful moment for this president to not miscalculate,” he said.

Senate Foreign Relations Chairman Jim Risch, a Republican from Idaho, defended the president’s judgment that any action against Iran should be “proportional,” especially when it comes to potential loss of life.

Of those questioning Trump’s strategy, Risch said “they ought to be thankful that they are not the one having to make that decision.”