Kindness is the antidote to Brexit nightmare - GulfToday

Kindness is the antidote to Brexit nightmare 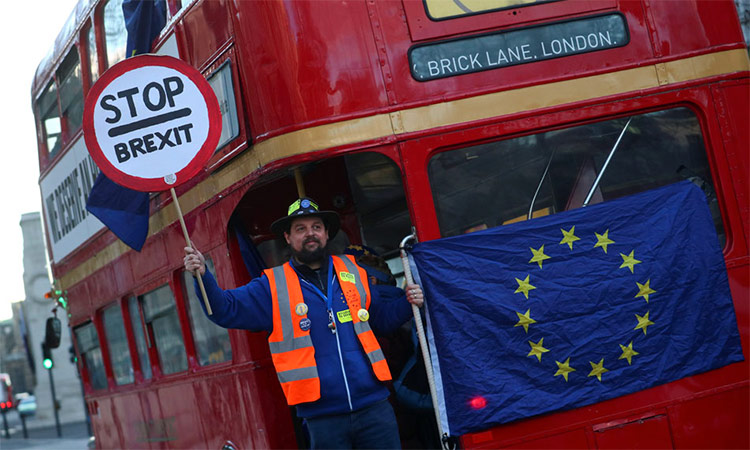 An anti-Brexit protesters' bus drives on Whitehall in London. Reuters

The European election results show yet again how urgently we need a solution to our political crisis. The stakes could not be higher. Farage has returned to politics full-throttle and the possibility of a catastrophic no-deal once again looms large.

One prominent backbencher I spoke to before the results came in predicted that Farage would be prime minister within ten years. Well, the odds just got shorter. And sadly if one runs through the facts it is no longer an outlandish projection. Farage’s Brexit party secured 29 MEPs. He’s threatening to contest every constituency in the next election. Hate crime is rising. Racism is becoming normal again. One MP has been killed and nearly all have received death threats. Couple that with the widening economic divide and the waves of dislocation likely to follow either Brexit or the cancellation of it and you have an incendiary situation that Farage can gently stoke all the while presenting himself as the antidote.

So what can we do? Up until now opposition to Farage has focused on undermining either his legitimacy or his views. Neither will be effective in changing hearts and minds on the scale that’s needed. Talking about Farage’s schooling doesn’t offer an alternative to his rhetoric. Focusing on the emptiness of his policies doesn’t tell anyone what you stand for. Showing him to be a fraud doesn’t make you anymore believable.

Similarly, a new political party or much-needed reforms like a move to proportional representation or citizens’ assemblies won’t be enough. The public, whose trust in conventional politics is at an all time low, don’t care about how the deckchairs are arranged. They want the ship turned around. And that’s why political boldness – no matter how hateful and harmful – holds such appeal.

We need a new political settlement. One that instead of fanning the worst in us encourages the best. It’s time to call a halt to a politics that legitimises greed, victim-blaming and competitive self-interest and replace it with a politics anchored by a principle which draws on all that is good in us: compassion.

Compassion lies at the heart of those moments in history that make us most proud to be British. Whether we name it as such or not, compassion is also the bedrock of how we largely live in our close communities, families and homes. No one throws their granny out when she is of no economic value; and most people want to invest time and money in their children’s future.

So what would could a new political settlement with compassion as its foundation look like? For a start it could provide a unifying principle. Instead of asking politicians to leave their political tribe to start a new politics, a new voting pact could be formed that would promise to put compassion first – above party loyalty. If enough MPs agree to place the dictates of their consciences ahead of the threats of their whips or the hunger of their ambition just imagine how different politics could be? And, it could start today.

Britain could become the first country in the world to pass a Compassion Act. Such an act would tackle two of the greatest ills we face – inequality and climate change in one simple move. With such an act, two common sense principles which most of us live by in our homes could be embedded at the core of our legislative and political system. Passing the world’s first Compassion Act would not just begin to transform our country, it would also help restore Britain’s standing on the world stage.

Compassion isn’t a woolly-headed, idealistic liberal notion – it’s a hard and radical political lever. Nor is it pie in the sky. The idea of a Compassion Act has already been discussed by MPs and peers in parliament earlier this month.

Compassion is the principle that can provide a new magnetic north for a country that has well and truly lost its way. Its time has come. Since we co-founded Compassion in Politics last October, MPs and peers from seven political parties have signed up and committed to putting compassion first in their decision making. And the numbers are growing every week.

In the coming weeks and months we will be launching a national conversation on how we can turn Britain away from hate and division and towards compassion. The clock is ticking. But there is still time to make the future something people can once again believe in.