Salvini is an opportunist than an ideologue - GulfToday

Salvini is an opportunist than an ideologue 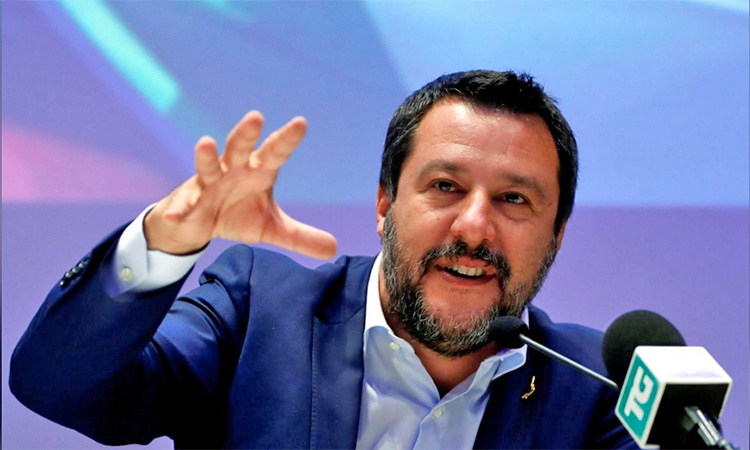 Politics in Italy is often likened to theater. So Verona, the legendary setting for Romeo and Juliet, seemed the perfect place to catch up with Italy’s most powerful, far-right politician, Matteo Salvini, a master of the theatrical gesture.

Leader of the Lega (League) party and interior minister, with aspirations to become prime minister, Salvini has come to symbolise the rise of Europe’s new populist nationalist leaders and the threat they pose to democratic systems.

He promotes a mantra of “Italy First” and loves to be pictured holding a large gun. He recently spoke from the same balcony in the northern town of Forli where Benito Mussolini addressed fascists. Moreover, he built his support by denouncing “the migrant menace” from Africa and forbidding boats with refugees from landing.

And he has created a new alliance of far-right leaders from across Europe, including France’s Marine Le Pen, which he hopes will win enough seats in next week’s European Parliament elections to weaken the European Union.

So how dangerous is Salvini? Certainly, it is unnerving to see a populist nationalist at the helm of one of Europe’s key countries, another sign of how growing economic inequality has turned voters against traditional Western political parties. Bearded, media savvy, always jovial, a fan of President Trump and Vladimir Putin, he is a master at self-promotion on YouTube and his website.

But here’s the good news for those of us who care about the state of democracy within our European allies: Salvini appears more of an opportunist than an ideologue, chipping away at democratic norms but unable to pull the entire democratic system down.

I came to watch him as he was campaigning this week in Verona.

This gorgeous city’s history is both dramatic and harsh. Hordes of tourists cram the tiny old square in front of the 14th-century stone Casa di Giulietta (the “home” of Shakespeare’s fictional Juliet), but the city was home to fratricidal tyrants in past centuries. Around the corner from Juliet’s house is the historic ghetto site where Jews were transferred to camps during the Holocaust.

These days, Verona is a prosperous, very conservative town filled with successful small and medium-sized businesses. It is key turf for Salvini, who originally built his party as a regional vehicle that sought autonomy for the wealthy northern region of the country.

But his northern base is less concerned right now with immigration than with the dismal state of Italy’s stagnant economy, where debt is soaring, growth is flat, and unemployment is over 10 per cent. Especially since the influx of African immigrants has dropped precipitously — due to policies begun by the previous Italian government to pay the Libyan coast guard to prevent smugglers from sending migrants by sea to Italy.

So when Salvini whirled into the elegant Palazzo Giusti — a 16th-century palace turned modern-day bank, with a great hall originally designed for theatrical performances — he was on the defensive. Wearing a suit (rather than his usual grungies), he faced an audience demanding to know why he hadn’t delivered on promises to lower taxes.

He didn’t look like a would-be Mussolini. “My priorities are to end immigration and jobs, jobs, jobs,” Salvini told me in a short interview. “Pay attention to Trump: If the workers have work, then they spend. You have to be able to give the people work.”

But if Salvini can’t deliver jobs, he will never rise to become prime minister, let alone leader of a new pan-European right-wing movement. (And the prospective members of that movement appear to have more differences between them than ideological solidarity.) Moreover, Salvini has been compelled to drop his demand for Italy to quit the European Union.

The long and short: Salvini can do damage and provoke internal strife in Italy. He can and does dog whistles to far-right, violent activist groups such as CasaPound Italia. And he plays on a yearning among fearful Italians for a return to “traditional values.”

But Italians tell me he spoke from Mussolini’s balcony mainly to woo southern voters who are still nostalgic for the dictator.

In other words, Salvini is a pol, not an ideologue, who is trying to outflank parties further to his right. Unlike his pal, Hungary’s president Viktor Orban, he is still operating within, and seriously contained, by the democratic system.

Bottom line: Think of Salvini as an Italian Trump, dangerously destructive of democratic norms, but not a Mussolini-in-waiting. Given Italy’s history of quickly turning against once popular leaders, he may not even be around that long.