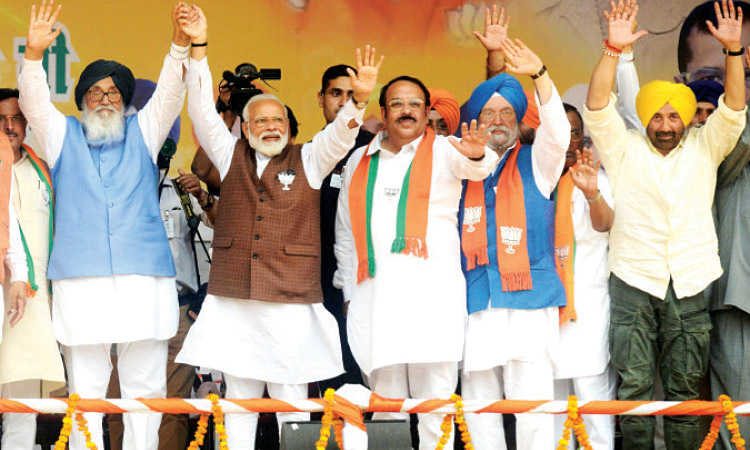 Narendra Modi gesture during a rally in Hoshiarpur on May 10. File/AFP

Come May 23, the Lok Sabha election results will be out. There are political parties and there are politicians and they are usually prepared for any eventuality: win or lose. They survive in politics if they keep the bosses happy. They will stay to fight another election.

How about film stars turned politicians? That is, what happens to the film stars after the elections? It won›t be so bad for the stars from the winning party, the ones from the losing party will have a lot to explain. The taunts will continue till the next elections.

As in the box office, so in politics: a star needs to have drawing power. So far, a star›s drawing power was used mainly by career politicians during their election rallies or events they organised to attract as well as to entertain a gathering.

This was followed by a stage when highly popular stars were made to contest elections, especially against stalwarts from opposition parties who were, otherwise, unbeatable. Like Amitabh Bachchan was pitted against the Uttar Pradesh veteran H. N. Bahuguna in 1984. Often, an actor is talked into contesting from a seat no career politician is willing to risk.

Later, in the 1991 elections, Rajesh Khanna was ‘used› against L. K. Advani in Delhi. Khanna lost by a thin margin of some 1,600 votes. Advani vacated the Delhi seat and retained Gandhinagar, which also was won by him. In the by-elections that followed, Rajesh Khanna was to fight BJP›s Shatrughan Sinha and won by over 28,000 votes. That is a clear proof of exploiting film people.

Similarly, Govinda was used in the 2004 elections. He was pitted against the BJP veteran, Ram Naik, from Mumbai North constituency. Govinda won but was not prepared for nor knew what being a people›s representative meant. People from his constituency, especially Virar, the distant suburb where he came from, expected a lot from him.

Your voters expect a lot from you including financial assistance, school admissions, jobs and local area improvement. Govinda, himself, had never had the privilege of such things. He now lived in Juhu and his voters followed him there. But, he would hide in a bungalow right opposite his flat in the same lane. Favour seekers found out that too but he seemed to have had enough of being an MP. These were not the things he had bargained for!

So far, film stars and other celebrities like cricketers were being used by political parties. They were pitted against giants their party men could not beat. If a celebrity won or lost, it was no loss to the party.

I think the film stars were being made scapegoats. If a star lost against a stalwart of an opposition party, the star had lost, not the ruling party that fielded him. These celebrities meant nothing except adding to a party›s tally. This was especially true in 1991 when Rajesh Khanna added a seat to the Congress tally which lacked a majority in Parliament on its own.

However, these stars› presence did not amount to anything. They did not get due importance once they won. Amitabh Bachchan left his MP ship midway. Rajesh Khanna stuck around but failed to win the next election. Govinda, as mentioned earlier, was not meant to take responsibility and did not want to contest again.

I have seen one picture which has been in circulation for a long time. It is about a film delegation pictured with the then Prime Minister, Indira Gandhi. In this photograph, only Mrs Gandhi sits on a chair while those from the film industry including Raj Kapoor, Dilip Kumar, Manoj Kumar, are either made to stand or squat on the ground! So subdued was the film industry in those days.

The Congress party was the one to join. For there was no other party. That was till after the Emergency. Film folk found an alternative in the slowly growing BJP.

Why would film stars and other celebrities want to join politics? Did they think it was bigger than the fame their stardom gave them? Are the film stars joining politics to stay relevant or do the political parties seek them to win votes?

In the South, the film stars had bigger status than the politicians. They catered to a regional population and could challenge Delhi politics. Hindi filmmakers were rather vulnerable. They needed the support of the entire Hindi speaking population which had divided loyalties. They could not take a political stand.

But, with the emergence of another national party in the BJP, the film folk as well as the other celebrities started taking a stand. Their suppressed anger at the Congress as well as their exploitation during the emergency, gave them an alternative in the BJP.

Also, what has changed now is that the celebrities have learnt the ropes. They don›t propose to be merely vote getters or to be used. Now, more and more celebrities are joining politics. And, not many of seem to treat politics as an alternative but, rather, to use their status, popularity to win and serve people.

Finally, there was a party which respected its celebrities. Dara Singh, a staunch nationalist, was nominated to the Upper House, the Rajya Sabha. He was spared the ignominy of contesting an election.

It looked like at least one political party was taking celebrities more seriously. So, the celebrity families are coming out of their social media statuses and actually coming out to fight the elections! Quite a few film stars and other celebrities are very vocal on the social media about their political affiliations and leanings. Akshay Kumar, the Deol brothers, Salman Khan, Paresh Rawal, Kirron Kher, Ajay Devgan, Kangana Ranaut along with many regional film stars are now active in politics.

Sunny Deol, otherwise an introvert, has jumped into the electoral fray contesting from Gurdaspur, the constituency earlier represented by another film star, the late Vinod Khanna.

Apart from Dara Singh, film stars who made it to Parliament through the Rajya Sabha were, Raj Babbar, Rekha, Shabana Azmi, Javed Akhtar, Hema Malini and Jaya Bachchan - they are some of the recent nominees.

It has been seen that while those nominated to the Rajya Sabha hardly show any interest in the proceedings or contribute in any way, even those elected to the Lok Sabha usually end up becoming the face of the party they represent. Not much is entrusted to them. Some, like Sunil Dutt, Vinod Khanna or Shatrughan Sinha, who got positions, only got some minor ministries. If at all, they are appointed at the Film Institute, Pune, the Censor Board or the Children›s Film Society.

The rest, who don›t get a position, are forgotten till the next elections. If they are recalled at all, that depends on their winnability.