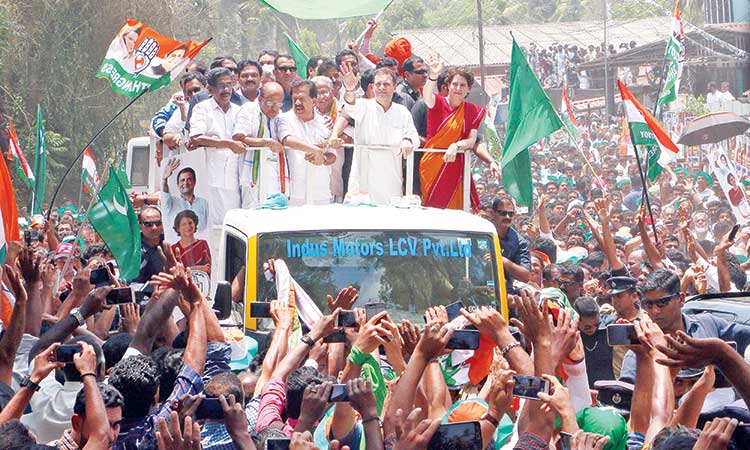 Rahul Gandhi during a rally.

Alexandria Ocasio-Cortez and Andrew Yang might not even be aware of it, but the controversial economic ideas espoused by the two young US politicians are being tested in a national election thousands of miles away.

In India’s polls, which started on Thursday and go on for more than five weeks, 900 million voters will decide on whether to give Prime Minister Narendra Modi a second term.

Opposition leader Rahul Gandhi’s Congress Party is trying to undercut Modi’s appeal by promising 72,000 rupees ($1,038) a year to each of the country’s 50 million poorest families. The plan has a distinct resemblance to the $1,000-a-month universal basic income that businessman Yang, seeking a 2020 Democratic presidential nomination, has proposed for every American adult.

New York Representative Ocasio-Cortez’s call for a jobs guarantee, the most ambitious part of her Green New Deal, also finds an echo in India, where unemployment and rural distress are central election issues. The Congress Party’s manifesto vows to fill 3.4 million public sector jobs and bolster a taxpayer-funded rural employment programme to 150 days of assured work. That would be up from 100 days at present (although even 50 days of work has proved hard to deliver).

Modi’s Bharatiya Janata Party has criticised the opposition for promoting policies it says will raise the tax burden on the middle class. In its own manifesto, the BJP pledged to cut taxes for middle income families while promising a more modest 6,000 rupees a year cash transfer to all farmers.

The Congress Party’s income supplement would cost 2 per cent of current GDP, once it ramps up. By then, sustained double-digit nominal GDP expansion will have lowered the programme’s cost to no more than 1.2 per cent to 1.5 per cent of GDP, according to the party’s head of data analytics. However, if the extra purchasing power pushes up prices more than output, then politicians will almost certainly come under pressure to lift that initial $1,000 a year payment.

But leaving aside the funding challenge, the more interesting debate is on what has caused this sharp leftward turn. India is transitioning from being a development state to a compensatory state, as Rathin Roy of the New Delhi-based National Institute of Public Finance and Policy puts it, describing the new clamour to put money directly into the pockets of citizens.

But why? Sabyasachi Kar of the Institute of Economic Growth, also in New Delhi, offers three preliminary hypotheses: The Indian private sector is facing institutional roadblocks that politicians can’t remove; the public sector, which once led the economy, has atrophied after decades of neglect; and “there’s an ongoing import of ideas of compensatory politics from the West, particularly from the US, where it has a completely different set of justifications.”

But are those justifications really so different? The long slide in workers’ bargaining power in the West, and a decline in their share of national income, is well documented. Something similar has occurred in India too. Between 1981 and 1991, when the country was still sitting behind high barriers to foreign trade and investment, 32 per cent of the economy’s value added went to labour as compensation, according to an International Labor Organization working paper. Creditors claimed 27 per cent as interest, and less than 21 per cent accrued to shareholders as profit.

However, in the 1990s, New Delhi began to slash import duties and relax license restrictions. The price of imported machines dropped. Workers were still cheap, but as globalisation gathered pace, they became three to four times more expensive to hire relative to capital goods in 2010 than they were in 2000, according to University of Manchester economist Kunal Sen. This discouraged labour-heavy businesses and encouraged more capital-intensive enterprises. Between 2001 and 2013, labour’s share of India’s value-added dropped to 23 per cent, lenders’ take fell to 12 per cent, and profit’s share zoomed to almost 50 per cent.

As with western nations, workers are no longer fine about swallowing a shrinking portion of a growing pie. As NIPFP’s Roy noted in a recent interview, India’s economy is producing goods and services for the 100 million people who have the education required for employment in capital-intensive manufacturing (and also, perhaps, talent-intensive software exports). The remaining billion-plus population is unable to participate meaningfully as either producers or consumers. Politicians are now being forced to compensate those who were left out.

But what’s their plan to stop losing competitiveness in lower-tech industries such as textiles, luggage and footwear to Bangladesh, Sri Lanka and Vietnam, which would also disproportionately affect the worse off? The basic income debate has really only started in India.