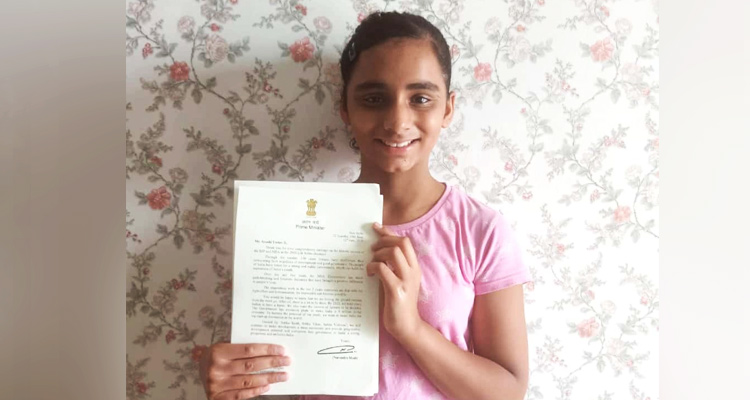 The news of the PM writing back to the 11-year old girl was shared by her father Ravinder Yadav on twitter.

Prime Minister Narendra Modi has replied to an 11-year-old girl from Harayana's Gurugram, who congratulated him on BJP's victory in the Lok Sabha elections and urged him to encourage people to keep their surroundings clean.

The news of the Prime Minister writing back to the 11-year old girl was shared by her father Ravinder Yadav on twitter. "My 11-year-old daughter is very, very happy after she received a letter from our beloved PM Shri Narender Modi ji. It was her idea to write to Modi ji. I just assisted in posting the letter. Thank you Modiji for making her so happy," Yadav tweeted along with the copy of his daughter's letter and the Prime Minister's reply.

Aarushi Yadav wrote to the Prime Minister on May 23, after the BJP got the huge mandate in the 2019 Lok Sabha elections.

In her letter to Modi, Aarushi, who studies in Class VI in St Xaviers School High School in Harayana's Gurugram wrote, "I am so happy that once again you are the Prime Minister. I have a request that when I go to my school, I see a lot of rubbish waste near it. I want that you should encourage people to clean the surroundings. If I will have to clean it, I will surely," she wrote.

Aarushi's further wrote that she knows that she has not written a nice letter "but will surely improve my skills". "And please write a letter yourself and reply," she requested the Prime Minister. 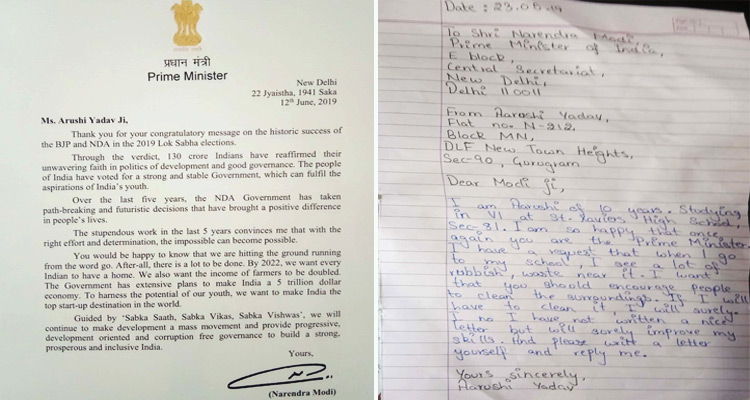 The letter and the response by the PM has been shared by the girls father on his Twitter account.

In his reply to the girl, Modi wrote, "Thank you for your congratulatory message on the historic success of the BJP and the NDA in the 2019 Lok Sabha elections."

Modi said through the verdict, 130 crore Indians have reaffirmed their unwavering faith in politics of development and good governance. The people of India have voted for a strong and stable government, which can fulfill the aspirations of India's youth.

"Over the last five years, the NDA government has taken path-breaking and futuristic decisions that have brought a positive difference in people's lives," the Prime Minister said in his letter.

He stressed the "stupendous work in the last five years convices me that with the right effort and determination, the impossible can become possible".

"You would be happy to know that we are hitting the ground running from the word go. After all, there is a lot to be done. By 2022, we want every Indian to have a home. We also want the income of farmers to be doubled. The government has extensive plans to make India a five trillion dollar economy. To harness the potential of our youth, we want to make India the top start-up destination in the world," Modi said.

He said, guided by 'sabka saath, sabka vikas, sabka vishwa', "we will continue to make development a mass movement and provide progressive development oriented and corruption free governance to build a strong, prosperous and inclusive India".