US may send 2,000 troops from Germany to Poland - GulfToday

US may send 2,000 troops from Germany to Poland 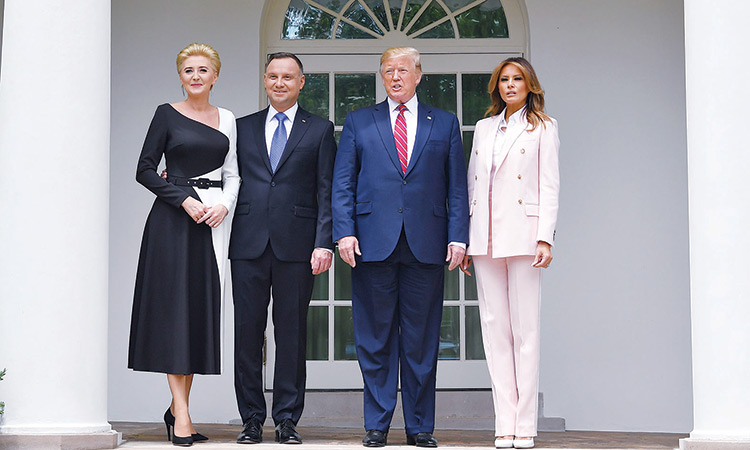 Donald Trump and Melania Trump greet Andrzej Duda and his wife Agata Kornhauser-Duda at the South Portico of the White House. Agence France-Presse

President Donald Trump said on Wednesday he is considering sending 2,000 US troops from Germany to Poland, a step sought by Warsaw to deter potential aggression from Russia.

“We’re talking about it,” Trump told reporters in the Oval Office as he met with visiting Polish President Andrzej Duda.

The United States already has troops in Poland as part of a 2016 agreement with the NATO military alliance in response to Moscow’s annexation of Crimea from Poland’s eastern neighbour Ukraine in 2014.

Trump said the United States has upwards of 50,000 troops in Germany and said 2,000 of them could be sent to Poland. He said Poland is going to be spending a lot of money on a military facility for the troops.

He also said he hopes Russia “will treat Poland with respect.” “They get hurt unfortunately too often,” Trump said of the Poles. “They’re in the middle of everything. When bad things happen it seems like Poland is the first one...I hope that Russia and Poland and Germany are going to get along,” said Trump, who has often been criticized by Democrats for being too close to Russia and President Vladimir Putin.

The US president said he thought he would travel to Poland at some point, but no dates were set yet. Duda has said he would unveil a deal this week to bolster the US security presence in Poland.

Trump asserted executive privilege on Wednesday to keep under wraps documents on adding a citizenship question to the 2020 US census, defying a House panel’s subpoena in another move to stonewall Democratic lawmakers’ investigations.

Despite Trump’s assertion of the legal doctrine, the House of Representatives Committee on Oversight and Reform pressed forward with its plans to vote on holding two members of Trump’s Cabinet - Commerce Secretary Wilbur Ross and Attorney General William Barr - in contempt of Congress over the census matter.

Asked about the issue, Trump told reporters at the White House: “When you have a census and you’re not allowed to talk about whether or not somebody’s a citizen or not, that doesn’t sound so good to me.... It’s totally ridiculous that we would have a census without asking.” The fight over adding a citizenship question to the census presents high stakes for both Trump’s fellow Republicans and the Democrats, with the 2020 US elections looming. The US Supreme Court is due to rule by the end of this month in the Trump administration’s appeal of a judge’s ruling blocking the addition of the question as a violation of federal law.

The judge’s ruling came in a lawsuit by group of states including New York and immigrant rights organizations arguing that the inclusion of a citizenship question would frighten immigrants and Latinos into abstaining from participating in the decennial national population count because of fear of immigration enforcement.

Critics have said Republicans want to engineer a deliberate population undercount in Democratic-leaning areas where many immigrants live in order to gain seats in the House. The census population count is used to allot seats in the House and to guide distribution of billions of dollars of federal funds.

The Oversight Committee is looking into how the Trump administration devised its plan to add a citizenship question. The committee has said that Ross, whose department runs the census, told the panel that he added the question “solely” at the request of the Justice Department.

However, committee Democrats have said documents show that Ross “began a secret campaign” to add the citizenship question to the census questionnaire shortly after taking office and months before being formally asked to do so by the Justice Department.

The committee has said that documents and testimony also showed that discussions about the matter between Ross and former Kansas Secretary of State Kris Kobach were “orchestrated” by Steve Bannon, a former close adviser to Trump.

Executive privilege is only rarely invoked by US presidents to keep other branches of government from getting access to certain internal executive branch information.