Sheikh Zayed ‘a beacon of compassion and tolerance’ - GulfToday

Sheikh Zayed ‘a beacon of compassion and tolerance’ 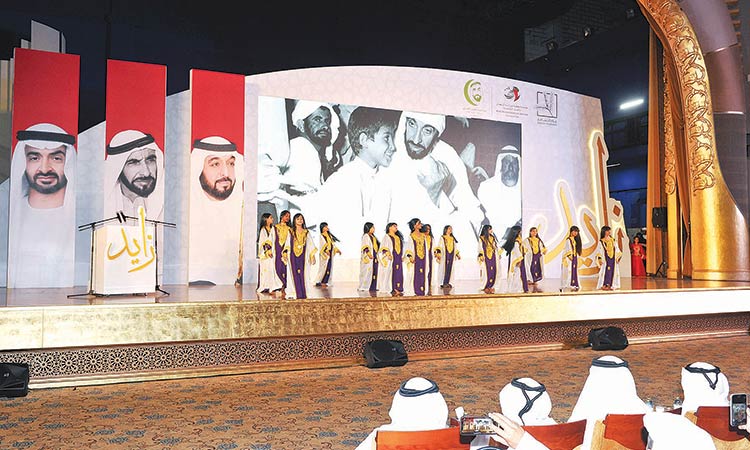 Her Highness Sheikha Fatima Bint Mubarak, Chairwoman of the General Women’s Union, President of the Supreme Council for Motherhood and Childhood, and Supreme Chairwoman of the Family Development Foundation, has said that the UAE’s celebration of the annual “Zayed Humanitarian Work Day,” reflects the country’s commitment to the Founding Father’s legacy in humanitarian and charitable work.

In a statement she made to mark the “Zayed Humanitarian Work Day,” Sheikha Fatima said, “As we mark this day, we renew our pledge to continue his march of development and to build on his achievements to remain among the top countries in humanitarian works, under the wise leadership of President His Highness Sheikh Khalifa Bin Zayed Al Nahyan.”

Sheikha Fatima affirmed that women empowerment is among the priorities of the wise leadership since the era of Sheikh Zayed, as the country’s leadership launched programmes that aim to reinforce the active role of women in the society. Sheikha Fatima stated that the Founding Father’s directives that created a shift towards supporting women’s development and empowerment, while highlighting the nation’s progress in global competitiveness indexes, particularly in women’s development arenas.

Sheikha Fatima Bint Mubarak added, “We celebrate an exceptional leader, whose profound memory is enshrined within every Emirati and even in the Arab and international conscience. Sheikh Zayed Bin Sultan Al Nahyan made history with his wisdom and leadership, and left his deep mark throughout the country, promoting it towards prosperity and renaissance.”

Sheikh Hamdan Bin Rashid Al Maktoum, Deputy Ruler of Dubai and Minister of Finance, said that the UAE has transcended the borders of the region to be recognised as a beacon of compassion, tolerance and generosity, thanks to the wisdom and compassion of the Founding Father, the late Sheikh Zayed Bin Sultan Al Nahyan.

In his message marking “Zayed Humanitarian Work Day,” which falls on the 19th day of Ramadan every year, the Deputy Ruler said, “Sheikh Zayed inculcated in us the values of coexistence, love, peace and tolerance. It is these values that make the UAE home to citizens and residents of different ethnicities and races, providing them with a decent life and happiness.”

“Today, philanthropy in the country has shifted from its traditional, individual concept to a holistic, institutional approach that includes the commitment of all government institutions and entities to not only provide relief material and assistance in kind, but also to be present in areas of crises to provide direct humanitarian support to those in need wherever they might be, their religion or race notwithstanding,” he added.

“We reaffirm our commitment to continue down the path created by the Founding Father to dedicate efforts to support humanitarian and charity work and to organise charitable and community events to encourage the spirit of giving and to instil a culture of goodness, as well as to collaborate with all government entities in strengthening the UAE’s position as a global destination for excellence, goodness and generosity,” Sheikh Hamdan said in conclusion.

Dr Amal Abdullah Al Qubaisi, Speaker of the Federal National Council (FNC) said that the UAE’s Founding Father, the late Sheikh Zayed Bin Sultan Al Nahyan, is an icon of Arab and international humanitarian work due to his leading initiatives that served humanity.

In a statement marking Zayed Humanitarian Work Day Al Qubaisi highlighted the UAE’s stature as the world’s leading donor of development aid for the fifth consecutive year, which reflects the vision of the Sheikh Zayed and a culmination of his great efforts to reflect the state’s commitment to its universal humanitarian mission.

She added that, the UAE will celebrate the anniversary of the father and the leader, Sheikh Zayed, by celebrating Zayed Humanitarian Work Day. Al Qubaisi stressed that the country, led by Sheikh Khalifa, is a model of humanitarian giving as it supports underprivileged people and makes efforts to achieve global development, stability and peace.

The FNC Speaker also emphasised that the UAE has never hesitated to support and provide relief aid to needy people.