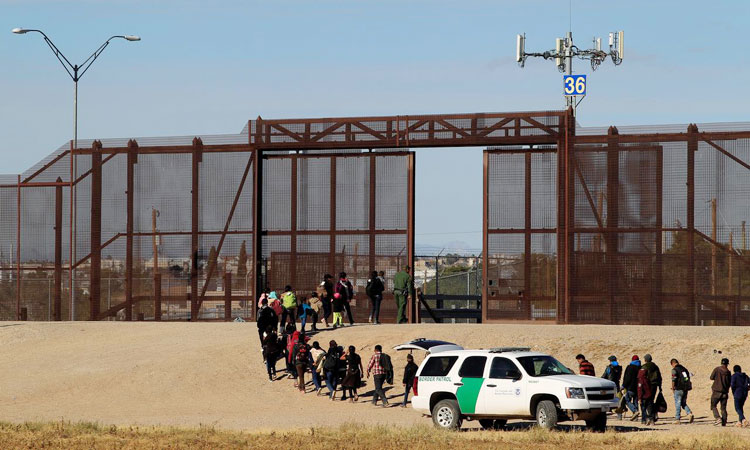 Migrants from Central America are seen escorted by US Customs and Border Protection (CBP) officials in El Paso, Texas, US. File photo/ Reuters

The moves are the latest effort by the Trump administration to stem a growing number of migrants crossing the US southern border, many of whom then seek asylum in the United States. Many of the changes would be dramatic shifts in how asylum seekers are treated, but would also require time-intensive regulatory procedures before they go into effect, which will likely take months.

On Monday, Trump signed a presidential memorandum that directed the Justice Department and Department of Homeland Security to, within 90 days, introduce a slew of new regulations tightening asylum policy, including one setting a fee for asylum applications, which are currently free to file.

Even a small fee could be insurmountable for many asylum seekers, said Victoria Neilson, a former official at US Citizenship and Immigration Services, the government agency that accepts asylum applications.

“The majority of people coming to the United States seeking asylum are coming with little more than the shirts on their back,” she said.

Another regulation Trump ordered his officials to prepare would ensure asylum claims are adjudicated in immigration court within six months.

US law already directs the Justice Department to finish asylum cases within six months, but with a backlog of more than 800,000 cases, asylum claims often take years to come to a conclusion.

“The provision to process cases in 180 days has been on the books for over two decades,” said Ashley Tabaddor, president of the immigration judges’ union. “The problem is that we have never been given adequate resources to adjudicate those claims in a timely fashion.”

Asylum cases are often complex and involve trauma, and judges should have discretion to provide more time depending on the case, Tabaddor said.

US Customs and Border Protection officials encountered some 100,000 people at the US-Mexico border in March, the highest level in more than a decade, and one which officials say is pushing resources to the breaking point.

Under US law, asylum seekers that have a credible fear of return can seek review in immigration courts. The large majority of asylum seekers eventually lose their cases but can live in and work in the United States for the months or years it takes to process their claims.

Monday’s memorandum is just Trump’s latest attempt to curb asylum protections. Other policy moves have been challenged in federal court.