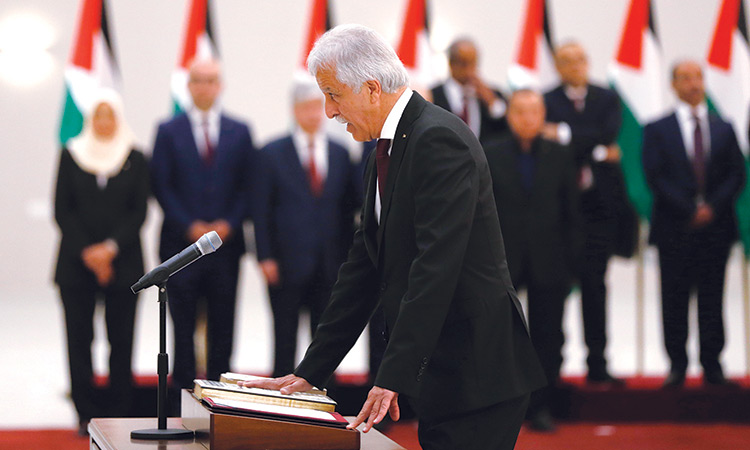 Marwan Awartani is sworn in as Minister of Education in the new Palestinian government in the Israeli-occupied West Bank town of Ramallah. Agence France-Presse

Palestinian government ministers were sworn in for a second time on Sunday after a lawyer noticed that the oath they took the day before had been missing a phrase.

The oath had dropped a clause where ministers swear to be loyal “to the people and its national heritage”, the lawyer said.

“I noticed the error and I posted a status update on Facebook,” he told AFP.

Shtayyeh called Al-Hawah to acknowledge the error and inform him that the oath would be repeated in its entirety on Sunday, he said.

Official Palestinian news agency WAFA said the oath was indeed repeated, adding that the mistake had been caused by a “typing error.”

Al-Hawah said he was familiar with the vow having closely followed Palestinian governments and because it was part of his teaching for law trainees.

He said the error could have placed the government’s legality in doubt.

According to WAFA, the full oath reads: “I swear by Almighty God to be loyal to the homeland and its sanctities, to the people and its national heritage, to respect the constitutional order and the law, and to take full care of the interests of the Palestinian people.”

The new ministers took office following a change of government that several analysts said was made to further isolate Hamas, at odds with the Fatah party of Abbas for more than a decade.

Abbas, 84, is seen as retaining the real decision-making authority.

While his term was meant to expire in 2009, Abbas has remained in office in the absence of elections since the Fatah-Hamas split.

The Palestinian Authority government is based in the occupied West Bank, while Islamist movement Hamas rules the Gaza Strip.

Hamas said in a statement that the new government “resorts to unilateralism and monopoly of power.”

Israeli police arrested the Palestinian governor of Jerusalem on Sunday after he allegedly violated an order previously given to him by authorities, police and his lawyer said.

The governor, Adnan Gheith, has been arrested several times in recent months in connection with an investigation related to a land sale.

His lawyer Mohammed Mahmud said he had been given a six-month order not to visit the occupied West Bank or contact certain people there, and police accused him of violating the order.

Police spokesman Micky Rosenfeld confirmed Gheith had been arrested and was being questioned, but could not provide further details.

Police had previously investigated Gheith over suspicions he was involved in the Palestinian Authority’s arrest in October of American-Palestinian Issam Akel, who was accused of involvement in selling an east Jerusalem building to Jewish buyers.

Palestinian officials have condemned his arrests and claimed it was intended to pressure the Palestinian leadership over Akel’s case.

Akel was sentenced to life by a Palestinian court, but he was reportedly later allowed to leave to the United States.

Israel occupied east Jerusalem in the 1967 Six-Day War and later annexed it in a move never recognised by the international community.

PA activities are barred from Jerusalem by Israel.

As a result, the PA has a minister for Jerusalem affairs and a Jerusalem governor located in Al-Ram, just on the other side of Israel’s separation wall from the city in the occupied West Bank.

Recently, a Palestinian teenager was shot dead by the Israeli army during renewed clashes on the Gaza border, the health ministry in the Palestinian enclave said.