Ghosn vows he won’t be ‘broken’ after re-arrest - GulfToday

Ghosn vows he won’t be ‘broken’ after re-arrest 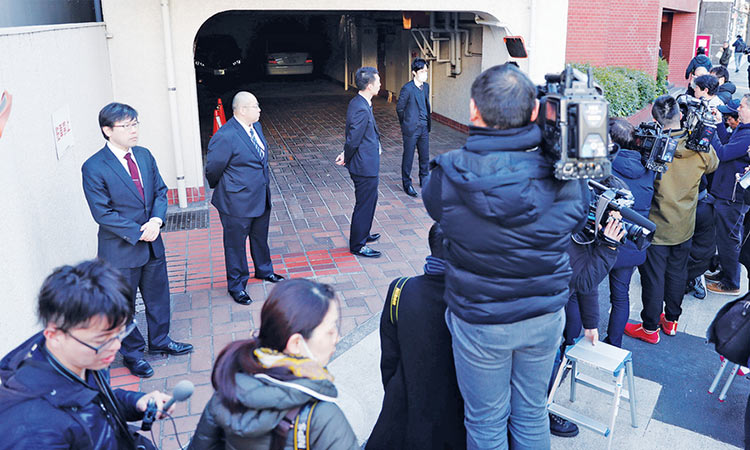 Journalists are seen in front of the residence of former Nissan Motor Chairman Carlos Ghosn in Tokyo, Japan, on Thursday. Reuters

TOKYO: Japanese prosecutors on Thursday re-arrested Carlos Ghosn on fresh allegations of financial misconduct, as the former auto tycoon slammed an “outrageous and arbitrary” detention and vowed he would “not be broken.”

In the early hours, officials raided the central Tokyo apartment the 65-year-old Ghosn has called home since winning bail last month after more than 100 days of detention on different charges.

It was the latest twist in a rollercoaster drama that has gripped Japan and the rest of the world since his shock arrest at a Tokyo Airport on November 19.

Prosecutors said Ghosn had been detained over transfers of Nissan funds totalling $15 million between late 2015 and the middle of 2018. They suspect Ghosn used $5 million of that for personal expenditure.

“The suspect... was responsible for overseeing the whole of Nissan’s operations and performing his duty loyally so as not to cause losses to Nissan, but he betrayed that duty in order to benefit himself,” they said in a statement.

Ghosn released a statement through his representatives attacking what he called the “outrageous and arbitrary” detention. “Why arrest me except to try to break me? I will not be broken,” said the former high-flying executive.

He has denied any wrongdoing and took to Twitter for the first time Wednesday to announce plans to “tell the truth” at an April 11 news conference that now looks unlikely.

Prosecutors can hold Ghosn for up to 22 days while they investigate the new claims and may re-arrest him again or seek to hold him in pre-trial detention.

Deputy chief prosecutor Shin Kukimoto justified the arrest by saying they judged there was a “risk of destruction of evidence.”

But Ghosn’s lawyer Junichiro Hironaka, known as the “Razor” for his mental sharpness, told reporters the fresh arrest was “against the spirit of the law” and “should not be tolerated in a civilised nation.”

He added his client had expected prosecutors would rearrest him and had therefore prepared a video, without specifying the contents or exactly when it would be released.

Visibly angry, he vowed to fight likely attempts by the prosecutor to extend the detention, claiming the arrest was “not necessary” and designed merely to pile pressure on Ghosn.

He added prosecutors had confiscated not only diaries and documents belonging to Ghosn, but also the passport and phone of the tycoon’s wife Carole.

Ghosn already faces three separate charges. The first two relate to the alleged deferring of around $80 million in income and concealing this in official documents to shareholders.

The third, more complex, charge is that he attempted to transfer personal losses to Nissan and paid a Saudi contact who provided collateral from the company funds.

In an interview with French television to be aired later Thursday, Ghosn reiterated he was “combative and innocent” but acknowledged “it’s hard.”

“A lot of lies have been told and these lies have come one after another,” he said.

Ghosn, who holds French, Brazilian and Lebanese nationalities, appealed to the French government to “defend” him and his “rights as a citizen.”

French Economy Minister Bruno Le Maire stressed Ghosn “should benefit from the presumption of innocence and consular protection” in an interview with BFMTV French television station.

A Nissan spokesman said the firm’s own internal probe had uncovered “substantial evidence of blatantly unethical conduct” and that their focus was on “addressing weaknesses in governance that enabled this misconduct.”

Ghosn had maintained his silence since paying around $9 million to win bail on March 6 when he walked out of his detention centre dressed in a workman’s uniform in a bizarre attempt to evade the world’s media.

Reports emerged early Wednesday that prosecutors were considering further charges against him whereupon Ghosn suddenly popped up on Twitter to announce he would “tell the truth” about his case at a news conference on April 11.