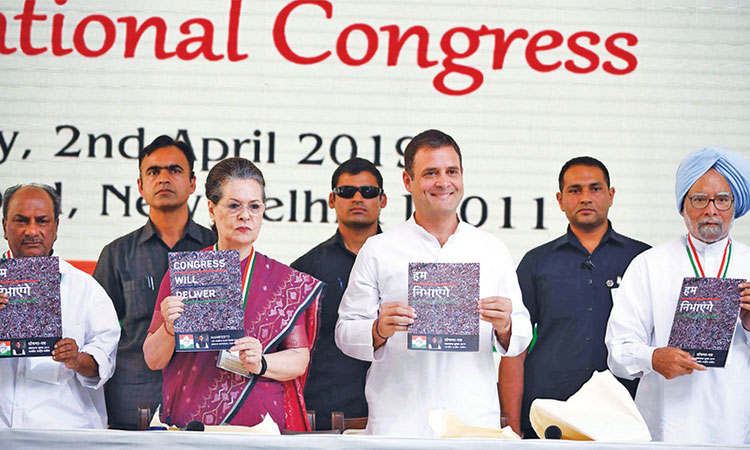 NEW DELHI: The Congress party manifesto for the upcoming Lok Sabha elections promises that loan default by farmers will no more be a crime if the party is elected to rule the country.

“Debt is a civil liability and we will not allow criminal proceedings to be instituted against a farmer who is unable to pay his/her debt.

In order to ensure priority to the issues affecting the agriculture sector, we will present a separate Kisan Budget,” said Congress president Rahul Gandhi.

He described the manifesto as the “voice of people.” The Congress chief said if his party is elected to power, its government would spend six per cent of the GDP on education. His party will work to unite the people, he said, accusing the Modi government of dividing the society and spreading hatred.

“Congress Will Deliver” is the tagline the party uses for its manifesto.

“Wealth and welfare” is the manifesto’s central theme, Chidambaram said. He said real issues in the country are unemployment, farmer distress and women’s safety among others and accused the ruling BJP of trying to take narrative to hyper nationalism.

Singh said the manifesto’s purpose is to spell out the vision for the country to move towards forward-looking and inclusive economy and polity.

“When we started a year ago, I made it clear that nothing in this can be a lie, because we live in a time where we hear a large number of lies every day,” Rahul said.

The party has promised 22 lakh government jobs by next March and 100 more days of assured jobs under MNREGA. It will also have separate budge for farmers, on the lines of the Railway Budget, said the Congress president.

The NYAY scheme, which assures Rs72,000 per year for India’s poorest is also one of the five main themes of the manifesto. “And this will help remonetise what Mr Modi had demonetised,” said Gandhi.

Congress will fill all 400,000 Central Government and institutional vacancies before March 2020.

It will also create an estimated one million seva mitra positions in every gram panchayat and urban local body. New businesses will get exemption from applicable laws and regulations (except Minimum Wages Act and tax laws) for a period of three years.

He said the country was going through an “economic emergency” and shock therapy was needed. “That will happen when we give directly to the poor and increase their buying power.” He also pledged to turn “Gabbar Singh Tax”, his name for Goods and Services Tax, “back into GST,” and simplify it.

“The narrative is NYAY. It is if (Prime Minister Narendra) Modi can give Rs30,000 crore to Anil Ambani, then Congress can give Rs72,000 to the poorest. Modi has got a shock effect of this. He’s hiding behind excuses. He can’t hide behind the reality, which is joblessness,” said Rahul Gandhi.

On a question on whether he was the Congress’s prime ministerial candidate, Rahul Gandhi said: “It is on the country, it is not on me.

I just work. You have to ask the people of the country.”  Congress President Rahul Gandhi’s decision to also contest from Left-ruled Kerala apart from Amethi has created further fissures in the opposition ranks ahead of the first phase of Lok Sabha elections on April 11.

While there were suggestions earlier of opposition parties fielding common candidates against the BJP-led National Democratic Alliance, the idea has mostly failed to materialize.

In some states, opposition parties are fighting the Bharatiya Janata Party (BJP) and also among themselves.

Gandhi’s decision to pick the Wayanad Lok Sabha constituency in Kerala has drawn strong reactions from the Left. CPI-M leader Prakash Karat said the Congress had “lost the plot” by deciding to contest against the Left instead of the BJP.

Kerala is now the only state where the Congress’ main opponent is the Left. Gandhi’s decision to also be a candidate in Kerala has invited scorn from the BJP, which is determined to defeat the Congress President in Amethi in Uttar Pradesh.

The Congress is also battling the stridently anti-BJP Trinamool Congress and also the increasingly also-ran Left in West Bengal. The Congress and the Left failed to shake hands in the state that was once a Left bastion.