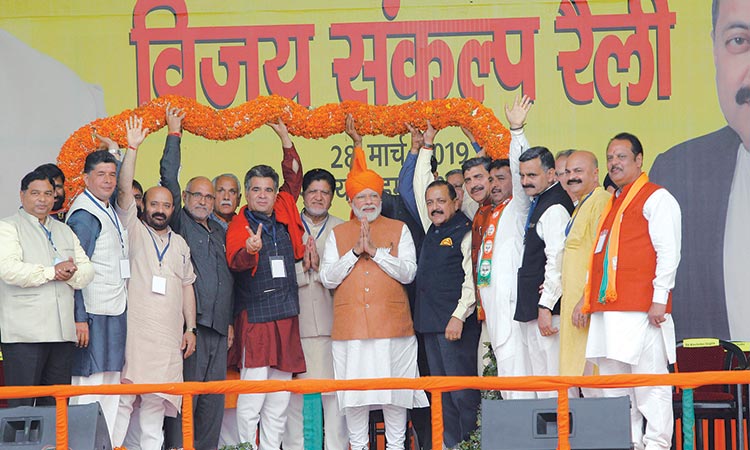 MEERUT: Prime Minister Narendra Modi on Thursday attacked the opposition parties for raising questions over India’s air strikes against Pakistan and its capabilities in the space.

“The country has seen many governments which believed in sloganeering but for the first time it has seen a decisive government which knows how to fulfil its commitments,” Modi said as he launched his campaign for the Lok Sabha elections.

“Be it land or sky or space, the government of your ‘chowkidar’ has shown courage to conduct surgical strikes,” he added.

The prime minister said that by raising questions over the government’s actions, some opposition leaders had become a “hero” in Pakistan.

Modi said the country had decided to again form a BJP government “because here is a decisive government which has delivered on every front.”

His government, he went on, had shown courage with “surgical strikes” not only on the land and from the sky but also in space.

This is Modi’s first election rally for the Bharatiya Janata Party (BJP) since the announcement of the April-May Lok Sabha polls by the Election Commission. It was announced earlier that Modi was to launch the poll campaign in Jammu and Kashmir on Thursday.

BJP sources said the grand start of the party’s election campaign in the region was to take place from Modi’s “Vijay Sankalp rally” scheduled to be held in the outskirts of Jammu city at the Doomi panchayat in Bhalwal.

Modi on Thursday called for “wiping out” the Congress from the country and said if the party remained in any corner of India, poverty will never go.” Now even the poor people are saying that if the Congress is removed, we will get rid of poverty. If it remains in any corner of the country, poverty will also stay,” Modi said during an election rally at Rudrapur in Nainital constituency.

The five Lok Sabha constituencies in Uttarakhand will go to the polls in the first phase on April 11.

Accusing the Congress of betraying the people, Modi said the party was the main cause for poverty in the country.

Modi claimed the BJP-led National Democratic Alliance (NDA) government has secured the country by supplying modern weaponry and equipment to the armed forces, besides launching counter-terrorism strikes at Pakistan’s Balakot.

The Congress, on the other hand, was embroiled in scams related to Bofors and VVIP choppers, Modi said and added, the Congress was sweating now with the unearthing of fresh evidences in these scams.

Blaming the Congress for doubting the Indian Air Force (IAF) strikes in Balakot, Modi said their “chowkidar” (watchman) didn’t inherit such values of cowardice. “Should I remain quiet despite terrorist threats? Will people forgive those who give anti-national statements just to become a hero in Pakistan,” Modi said.

The premier also asked the Congress why its “blood did not boil” when the country was under siege during the 2008 Mumbai terror attacks.

Modi also accused the Congress of keeping the issue of Rafale purchase on the back burner for over 10 years because it wanted “kickbacks.”

“Instead of providing them with modern weapons, the Congress used to file cases against the Army chiefs,” Modi said.

Modi said Uttarakhand was moving on the path of development mainly due to his government’s policies and cited examples of “fast-paced” development in projects like the Rishikesh-Karanprayag rail line, Char Dham all-weather road and Kedarnath reconstruction works.

“Pakistan is praying that the ‘chowkidar’ should somehow lose the elections so that this mixture of sorts comes to power in Delhi,” he told a BJP election rally here, referring to the opposition parties who want to unseat him in the April-May battle.

“Those who devise policies and strategies for the Congress come on national media and social media to give a clean chit to Pakistan and terrorists,” Modi added.