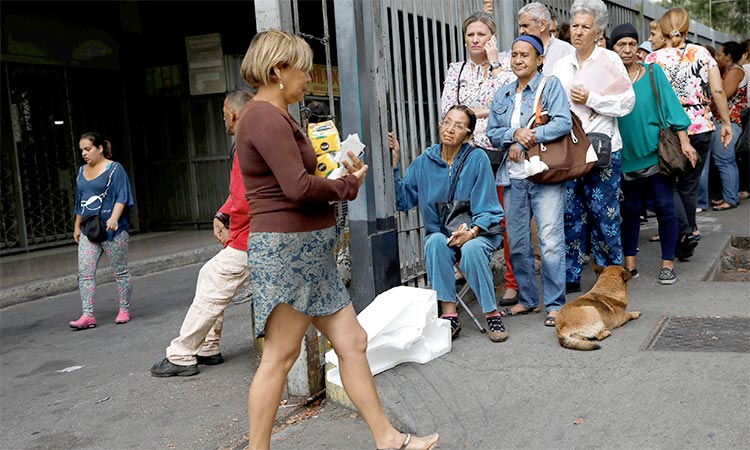 People queue outside a supermarket to buy corn flour and sugar during a blackout in Caracas on Wednesday.

CARACAS: Millions of Venezuelans remained without power on Wednesday in the second major blackout of the month, leaving residents scrambling to find food and water.

Work and school were cancelled for a second day after power went out on Monday afternoon in much of the country, less than two weeks after the country’s worst-ever blackout left residents scrambling to find food and drinking water.

“I think this is going to be worse than the first blackout,” said Julio Barrios, 60, an accountant who was looking for open stores to buy food or ice.

“A lot of people want to work but there’s no transportation, and if there’s nobody working the country will be paralyzed.” The ruling Socialist Party accuses the United States government of sabotaging its electricity network, though Guaido and opposition critics call it the result of a decade of corruption and mismanagement.

Power had returned to around half the country’s 24 states on Tuesday night but went out again at dawn on Wednesday.

Electricity has been intermittent since Monday.

In some parts of Caracas, it functions on some blocks but not on others.

The country’s main oil export port of Jose and four crude upgraders have been unable to resume operations following Monday’s outage, according to industry workers and a union leader.

Julio Castro of the non-profit organisation Doctors for Health said an 81-year-old woman died on Tuesday in a hospital in the central state of Aragua because the elevators were not functioning and he could not get to the area where he could receive treatment.

The group said 24 people died during the previous blackout in public hospitals due to problems caused by the lack of power.

Those who went to work because they had not heard that the workday had been canceled were returning to their homes.

“How am I supposed to find out, if there’s no power and no internet?” said dental assistant Yolanda Gonzalez, 50, waiting for the bus near a Caracas plaza.

Venezuela’s western cities, including Maracaibo and Barquisimeto, as well as the central city of Valencia, also had no power on Tuesday, according to witnesses.

Information Minister Jorge Rodriguez on Monday said the blackout was the result of an attack on Venezuela’s main hydroelectric Guri dam which had affected three major transmission lines.

He did not explicitly blame the outage on any individual or group. But he said, “the intention of Venezuela’s far right is to attack, generate anxiety and anguish, in order to seize power and steal all our resources.” Brazil Mines and Energy Minister Bento Albuquerque said on Tuesday that Venezuela had not complied with its contract to supply northern Roraima state with energy since March 7, without providing details.

Opposition leader Juan Guaido, who invoked the constitution to assume the interim presidency in January after declaring Maduro a usurper, during the morning was scheduled to announce a new set of plans to end Maduro’s government.

“It is time to end the usurpation,” Guaido wrote on Twitter on Tuesday night.

Maduro’s government has been disavowed by most South American countries and has been hit by crippling sanctions meant to cripple the Socialist Party’s sources of income.

But he has held on thanks to continued loyalty by top military commanders and diplomatic support from Russia and China, who accuse the United States of seeking a coup against him.

Russia’s Foreign Ministry has said that Russian military personnel that arrived in Venezuela over the weekend has every right to be there.

The rift between Russia and the United States over how to resolve the crisis in Venezuela widened following the arrival of Russian military personnel to support Maduro over the weekend.

In Moscow’s first comment on the reports of the deployment, foreign ministry spokeswoman Maria Zakharova said in a statement late on Tuesday that Russia has sent personnel “in strict accordance” with the Venezuelan constitution and a bilateral agreement on military cooperation. She did not elaborate on how many troops Russia has sent.

The United States believes the planes were carrying “cybersecurity personnel,” a US official told Reuters on Tuesday. That would suggest part of their mission could be helping Maduro’s loyalists with surveillance and protecting the government’s cyber infrastructure.