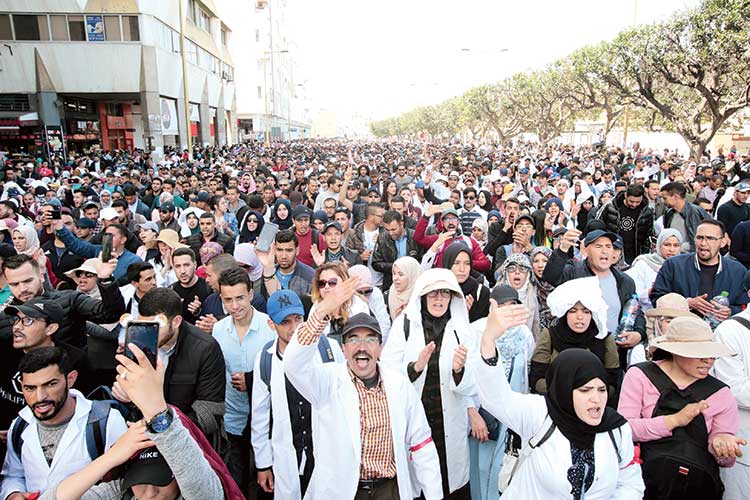 RABAT: About 10,000 teachers staged a new protest in the Moroccan capital Rabat on Sunday to demand permanent jobs, hours after police had used water cannon to disperse an overnight demonstration.

Several thousand young teachers calling for permanent work contracts had marched peacefully through the streets of central Rabat chanting slogans such as “freedom, dignity, social justice.” Around 60 people were lightly wounded and taken to hospital, according to Othman Zeriouch, one of the organisers of the protest movement.

Zeriouch said a meeting would be held later Sunday to discuss future action.

The teachers, many of whom had spent the night in the streets of Rabat after the first event, marched from the education ministry to the square in front of parliament where police had intervened after midnight to prevent them from spending the night in the main Mohammed V Avenue.

They want an end to renewable contracts in favour of permanent jobs that offer civil service benefits, including a better retirement pension.

As night fell, demonstrators held aloft candles and used their mobile phones as torches, before setting up a makeshift camp in front of parliament.

Police moved in to break up the gathering after the protestors refused to leave following more than two hours of negotiations, according to a journalist.

Some also shouted political slogans such as “This is a corrupt country” and “We are ruled by a mafia,” urging Prime Minister Saad Eddine El Othmani and Education Minister Said Amzazi to step down.

The protest was organised by an alliance of leftist opposition parties, main unions, civil society organisations and university students. The teachers have been striking for three weeks in a row.

The protesting teachers were threatened by the ministry to return to the classroom or be sacked.

“We are not intimidated by the threats of the education ministry’s because we came to claim our right to be integrated in the civil service and defend the public school,” Abdelilah Taloua, a young teacher, said.