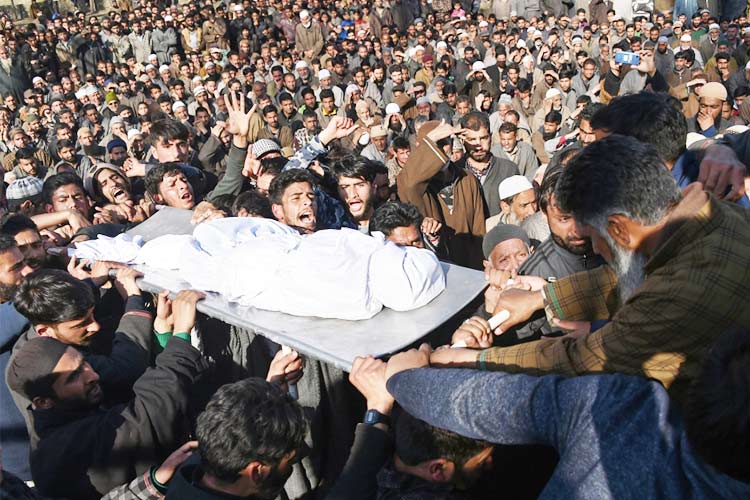 Kashmiri villagers carry a charred body of a twelve-year-old boy, Aatif Mir, during a funeral procession in Hajin area, in Bandipora district of Kashmir, on Friday. Tauseef Mustafa / AFP

SRINAGAR: A 12-year-old boy was among six people killed in three separate gun battles between Kashmiris and security forces in Indian-administered Kashmir, the police and army said on Friday.

The boy was killed after separatists were trapped in his home in the northern town of Hajin and engaged in a two-day gun battle ending on Friday, police told AFP. His father escaped.

Police later claimed the boy was "kept hostage" by the separatists.

"Despite repeated requests by community members and police for his release, he was brutally killed by the rebesl," a police statement said.

Two more Kashmiris were "eliminated" late on Thursday in the frontier district of Baramulla, Kalia added, while one soldier and two policemen were injured.

Another separatist died in a clash with soldiers in the south of the Kashmir valley, army spokesman Colonel Rajesh Kalia said.

At least a dozen villagers were wounded when government forces clashed with protesters near the site of the fighting, firing metal pellets and live bullets to push them back.

Three of the villagers were taken to hospital in Srinagar and were in critical condition, a local police officer and hospital sources said.

Entire neighbourhoods in Kashmir often march towards sites of gun battles between rebels and government forces, attempting to rescue separatists.

Scores of civilians have died during such clashes.