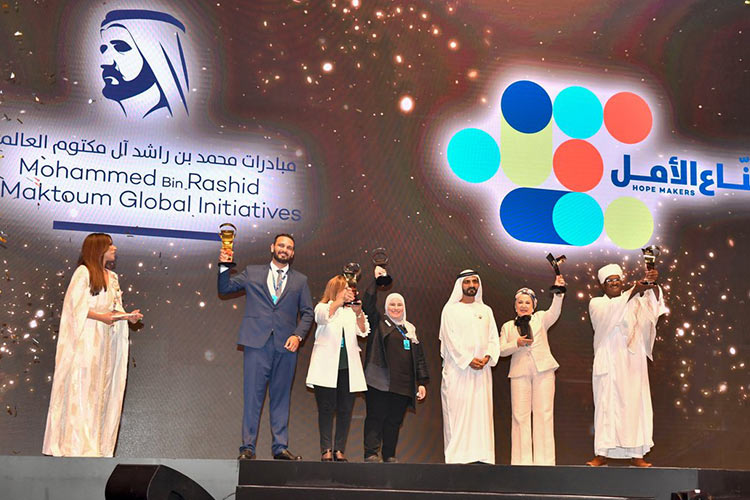 DUBAI: On the launch of the third round of Arab Hope Makers initiative, His Highness Sheikh Mohammed Bin Rashid Al Maktoum, Vice President, Prime Minister of the UAE and Ruler of Dubai, said that "Every person has a capacity to give and a talent to invest in serving societies."

He added, "Water drops make a river, and reigniting civilisations starts with giving. Creating hope will spark a new life in our region."

The third round of Arab Hope Makers initiative, the largest of its kind in the region, launched to celebrate more inspiring philanthropic efforts that serve humanity and make a difference in societies.

Under the umbrella of Mohamed Bin Rashid Al Maktoum Global Initiatives (MBRGI), Arab Hope Makers are recognised for their humanitarian projects and initiatives that improve lives, alleviate the suffering of those in need and empower marginalised groups.

Through honouring people who devote their time and efforts to help others, the initiative aims to spread hope and instill the value of giving in society to fight despair and pessimism in the region.

Sheikh Mohammed said the initiative’s previous two editions proved that "the Arab world is home to thousands of inspiring unsung heroes and positive change makers," adding that "Hope Makers are role models of altruism and compassion."

He noted, "Creating hope will help build a stable and prosperous future in the Arab world," he added, "It is of great importance to invest energies and capabilities in making a positive change and transforming challenges to opportunities for development and prosperity." Sheikh Mohammed Bin Rashid stressed that "people cannot live without hope. Therefore, creating hope is necessary to fight despair and pessimism in the Arab world."

He urged Hope Makers to share their stories in this year’s initiative, stressing that "we will continue to support Hope Makers in the Arab world."

Arab Hope Makers is now open for individuals, teams and entities that improve lives through an initiative, service or volunteering programme in education, health, environment, culture, empowerment and community development.

Candidates can submit their stories of hope on the Arab Hope Makers website as part of the registration process that will continue for a month. The winner will receive the Dhs1 million award in recognition of their efforts and as financial support to develop and expand their humanitarian projects to impact more people.

Since its launch in 2017, the initiative has recorded an overwhelming response of over 152,000 applications from different parts of the world.