Doctors call for protests against Bouteflika 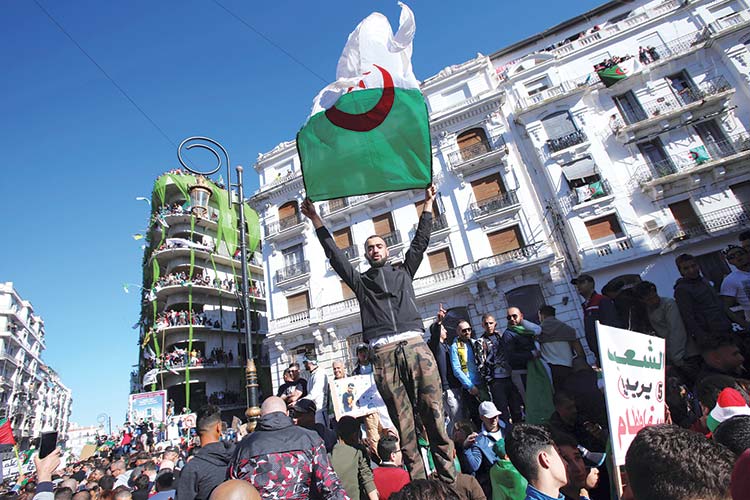 A demonstrator carries a national flag during a protest over Abdelaziz Bouteflika’s decision to postpone elections and extend his fourth term in office in Algiers. File / Reuters

ALGIERS: Algeria’s doctors have called for mass protests against Abdulaziz Bouteflika during the country’s independence day celebrations on Tuesday, ratcheting up pressure on the ailing president who is clinging to power.

In a statement released on Monday, the independent Collective of Algerian Medical Residents (CAMRA) urged medical students to take part and denounce the “ruling gangs.”

Protesters are desperate for new leaders to replace Bouteflika and other veterans of the 1954-1962 war of independence against France.

The president, in power for 20 years, announced last week that he was reversing a decision to stand for a fifth term, but stopped short of standing down. He has postponed elections, effectively extending his current term, while promising to adopt a new constitution under a reform plan.

The changes have brought no halt to demonstrations under way for more than three weeks against a ruling elite viewed as out of touch. Bouteflika, 82, has rarely been seen in public since a stroke in 2013, and protesters say he is unfit to rule.

In another concession, the Ministry of Religious Affairs on Sunday informed clerics that they are no longer required to submit texts of their sermons to authorities for approval. One of the most influential clerics in Algiers expressed his opposition to the government last week.

In Algiers, dozens of workers from the vocational training sector protested, chanting “no to the extension.”

Since returning from medical treatment in Switzerland last week, the Bouteflika has been losing allies, including senior members of the ruling National Liberation Front party, known by its French acronym FLN.

In the latest blow to the ruling elite, leaders of 13 independent Algerian labour unions refused to support Prime Minister Noureddine Bedoui’s efforts to form a cabinet.

“We will not hold discussions with this system, we belong to the people and the people said ‘No’ to the system,” Boualem Amora, a leader of an education union, told reporters. The prime minister planned to announce a new cabinet early this week.

Newly-appointed Deputy Prime Minister Ramtane Lamamra is expected to start a tour on Tuesday of some of Algeria’s main allies abroad to explain the new political roadmap, said a foreign ministry official.