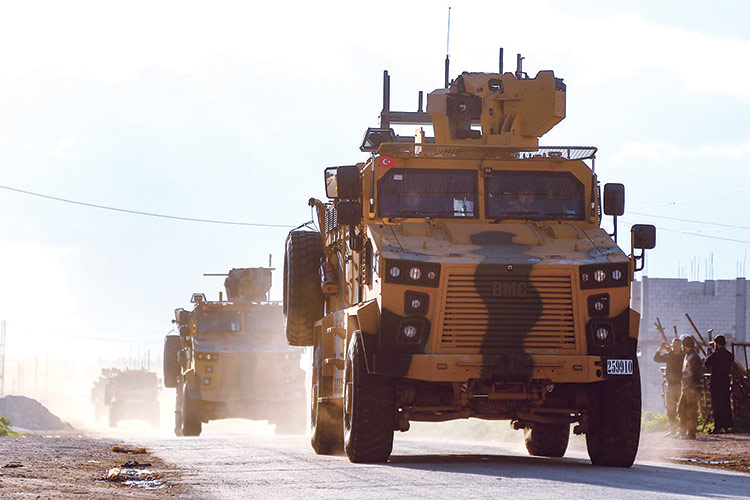 A convoy of armoured Turkish military vehicles drives along a road in Khan Sheikhun on Sunday. Agence France-Presse

Thousands of people are believed to remain inside the Daesh group’s last sliver of territory in eastern Syria, a US-backed force said on Sunday citing evacuees, hampering the operation to crush the militants.

The Kurdish-led Syrian Democratic Forces have been trying to flush militants from their last desert holdout in the village of Baghouz near the Iraqi border since January.

At the time, Mazloum Kobani, the SDF’s top commander, estimated that the operation would take one month.

Thousands of men, women and children, as well as suspected militants, have poured out of Baghouz in recent weeks.

The numbers have baffled the SDF and prompted them to pause the operation several times.

SDF spokesman Kino Gabriel told a news conference on Sunday that according to the latest group that quit the pocket, “an estimated 5,000 people” are still holed up inside.

He cautioned, however, that the SDF has not been able to verify that figure.

Those fleeing the enclave have previously reported widely inconsistent figures on the number of people still inside, ranging from thousands to a few hundred.

Gabriel said there was no clear timeline for the end of the operation, but estimated that it may take several more days before Daesh is driven from its last pocket.

“I hope it won’t take more than a week but this is a personal estimate,” he said in the village of Sousa in eastern Syria.

Gabriel said that nearly 30,000 Daesh members and their relatives have surrendered to US-backed forces since Jan.9, including more than 5,000 fighters.

An additional 34,000 civilians have been evacuated from the Daesh redoubt over the same period, he said.

The exodus has sparked a humanitarian crisis in Kurdish-run camps for the displaced further north, where civilians have been transported.

At the height of its brutal rule, Daesh controlled territory in Syria and Iraq the size of the United Kingdom, with a population of millions.

The total capture of Baghouz by the SDF would mark the end of the cross-border “caliphate” it proclaimed more than four years ago.

Beyond Baghouz, Daesh retains a presence in eastern Syria’s vast Badia desert and sleeper cells in the northeast.

Holdout militants defending their last bastion have launched a series of suicide bombings in recent days to hamper the SDF advance.

Meanwhile, the UN envoy for Syria held talks in Damascus on Sunday with Foreign Minister Walid Muallem, who stressed the need for a Syrian-led political solution to the eight-year war.

Norwegian diplomat Geir Pedersen discussed efforts to find a political settlement to the conflict, including moves to form a committee tasked with drawing up a post-war constitution, state media said.

But he said that the political process, including talks over a new constitution, should be “Syrian-led and –owned.”

“The constitution and all matters related to it are a sovereign issue that should be decided by Syrians themselves without any foreign interference,” Muallem said in a statement carried by SANA.

Pedersen arrived in Damascus on Sunday in the second such visit since he took up his post in January.

Last month the envoy said in Geneva that he saw a constitutional committee as “the potential door-opener for the political process.”

He pointed to a UN resolution adopted in 2015 calling for the creation of a new constitution followed by UN-supervised elections.

The UN Security Council remains deeply divided over the way forward in Syria, where the war entered its ninth year last week with more than 370,000 people dead.

Veto-wielding Russia, a key backer of President Bashar Al Assad, has taken a lead role in diplomatic efforts through the so-called Astana group with Iran and Turkey that has largely sidelined UN diplomacy.