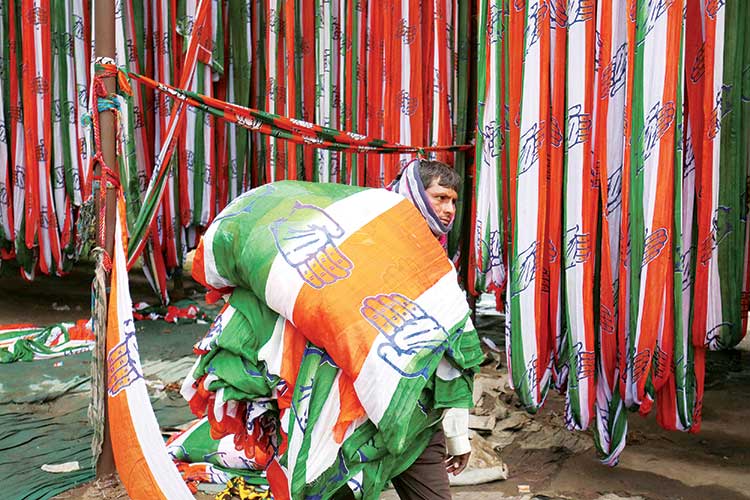 A worker carries a roll of flags of Congress party at a flag manufacturing factory in Ahmedabad. Reuters

The southern state will vote on April 23 to elect 20 seats to the 544-member Lok Sabha, the lower houses of parliament, in staggered national elections spread over two months.

Four other candidates of allies, two fielded by the Indian Union Muslim Leagues (IUML) and one each of the Kerala Congress (M) and Revolutionary Socialist Party (RSP), are already in the fray.

Mullappally Ramachandran, the Congress state chief, said candidates for the remaining four seats (Vadakara, Wayanad, Alappuzha and Attingal) would be ready by Monday.

The state’s ruling Left Democratic Front (LDF) led by the Communist Party of India (Marxist) or CPM had finalised all their 20 candidates much in advance and is way ahead in campaigning.

However, Prime Minister Narendra Modi’s Bharatiya Janata Party (BJP), which is yet to open its account in Kerala, is continuing deliberations on possible candidates for all but one seat.

Kummanam Rajasekharan, who quit last week as Mizoram this month, is locked in a fierce three-cornered contest with Congress leader Dr Shashi Tharoor and C Divakaran of the Communist Party of India (CPI) in the state capital here.

The BJP is reportedly waiting for the finalisation of the Congress candidates and is hoping to field some disgruntled leaders from the rival camps like Tom Vadakkan and Dr KS Radhakrishnan who switched sides this week.

In Mavelikkara, Congress party’s Kodikunnil Suresh is defending the seat for the seventh time while the CPI has fielded its Adoor legislator Chittayam Gopakumar in a desperate bid to wrest it.

Benny Behanan is its candidate in Chalakudy, challenging the incumbent Innocent, an independent earlier and now the CPM candidate, and the youngest of the Congress candidate, Ramya Haridas, is pitted against CPM’s PK Biju in Alathur.