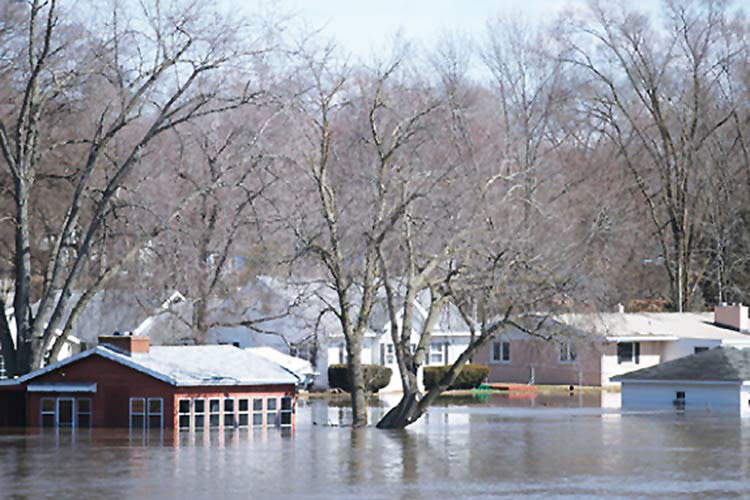 The Rock River crests its banks and floods Shore Drive on Saturday, as seen from the Bauer Parkway bridge in Machesney Park, Illinois. Associated Press

OMAHA: Authorities were using boats and large vehicles on Saturday to rescue and evacuate residents in parts of the Midwest where a recent deluge of rainwater and snowmelt was sent pouring over frozen ground, overwhelming creeks and rivers, and killing at least one person.

The scramble to move people out of harm’s way was expected to subside going into the new week, as rivers and creeks in flooded eastern Nebraska and western Iowa were expected to crest Saturday and Sunday.

That left officials downstream looking to prepare for likely flooding.

The National Weather Service said the Missouri River at St Joseph reached nearly 8m on Saturday, about a foot below what’s considered major flooding at the northwest Missouri city. But it’s expected to crest Wednesday or Thursday at 10m - more than two feet above major flooding level.

Evacuation efforts in eastern Nebraska and some spots in western Iowa on Saturday were hampered by reports of levee breaches and washouts of bridges and roads, including part of Nebraska Highway 92, leading in and out of southwest Omaha. Authorities confirmed that a bridge on that highway that crosses the Elkhorn River had been washed out on Saturday. In Fremont, west of Omaha, the Dodge County Sheriff’s Office issued a mandatory evacuation for some residents after floodwaters broke through a levee along the Platte River.

And in Mills County, Iowa, authorities ordered people in some rural areas to evacuate after the Missouri River overtopped levees.

The flooding followed days of snow and rain - record-setting, in some places - that swept through the West and Midwest.

The deluge pushed some waterways, including the Missouri River, to record levels in Nebraska, South Dakota, Iowa and Minnesota. The flooding was the worst in nearly a decade in places.