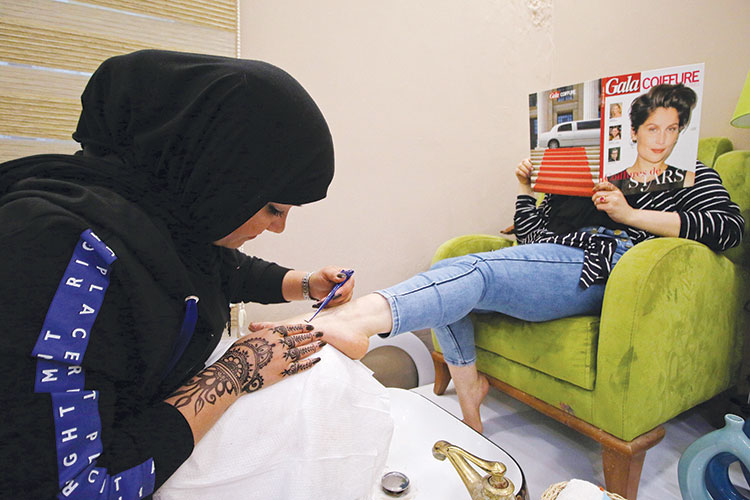 A woman applies henna to the feet of a customer inside her beauty shop in Basra. Reuters

Baghdad: In southern Iraq, where the Euphrates and Tigris rivers meet, the Fao peninsula was once known for its swathes of henna plants and palm trees. But the lush greenery of this Basra province district has now turned into a hardscrabble surface.

Walking past dead palm trees on land so dry it cracks, farmer Abbas Abdul Hassan said water shortages and ensuing use of salty water from the polluted Shatt Al Arab river for irrigation had eaten up areas that grew henna plants, whose ground leaves make the dark paste used as a dye.

“This land was packed with henna plants ... the salty water tide killed the henna and killed palm trees,” he said.

Decades of conflict in Iraq, once a major date producer before switching its economic focus from agriculture to oil, have devastated farms.

Its second city Basra has suffered destruction from wars, conflict and neglect since the 1980s. Fao, which lies on the bank of the Shatt Al Arab delta near the Gulf, was hit hard due to its location on the frontline of Iraq’s 1980-88 war with Iran.

Abdul Atheem Mohammed of Basra’s agriculture office said some 38,000 palm trees had died in the area since 2008.

“Shortages of water which caused the rise of salty water tides hit agriculture hard in Basra and caused the fall in henna farms in Fao,” he said.

A local government project has been trying to revive the plantations in the last two years by setting up a farm in northern Basra. During the collection season — January to April and then May — leaves are reaped every 45 days and sold at local markets.

At a Basra salon, customer Sara Ibrahim described Fao henna as “a heritage.”

“Iraq used to export the henna of Fao to the Gulf countries,” she said as she got her hands decorated with henna. “But it is difficult to get it nowadays.”