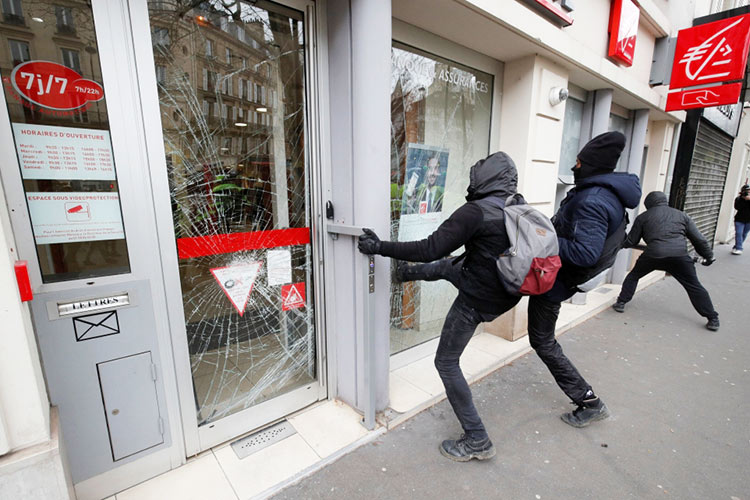 Protesters break a window during a demonstration by the "yellow vests" movement in Paris, France, on Saturday. Philippe Wojazer / Reuters

PARIS:  Demonstrators looted stores on the Champs-Elysees avenue in Paris on Saturday, on the 18th week of "yellow vest" protests, characterised by an uptick in violence after dwindling participation in recent weeks.

A Boss menswear store and the high-end Fouquet's restaurant were among the premises targeted as groups of masked protesters lobbed stones at police defending the Arc de Triomphe war memorial. The police responded with teargas and water cannon.

Protesters threw cobblestones at riot police through clouds of tear gas in front of Paris' Arc de Triumphed monument, which was ransacked at the peak of the protests in December. Bonfires were started in nearby streets, with at least one car in flames.

Police also used water cannons and had arrested more than 30 protesters by late morning as tensions flared at the top of Paris' upmarket Champs Elysee avenue, where the windows of a high-end restaurant were smashed. 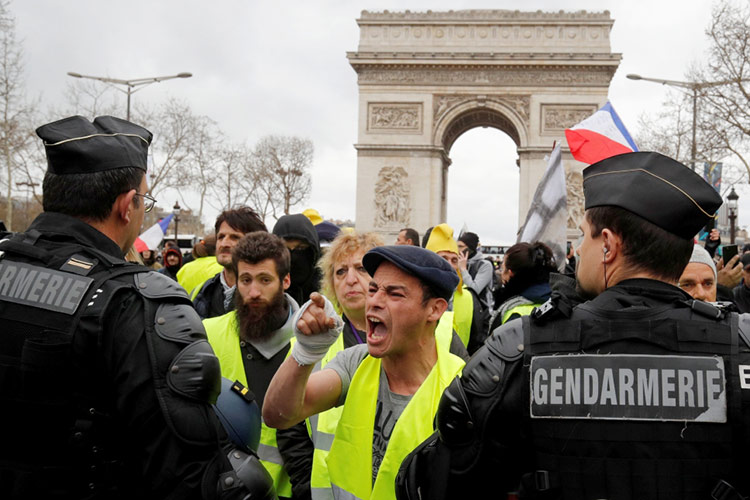 A protester reacts as he attends a demonstration by the "yellow vests" movement in Paris on Saturday. Philippe Wojazer / Reuters

Interior Minister Christophe Castaner said thugs looking for trouble had infiltrated the demonstrations and gave the order to respond to "unacceptable attacks with the greatest firmness".

"Let there be no doubt: they are looking for violence and are there to sow chaos in Paris," Castaner said in a Tweet.

Protesters have promised to draw bigger numbers to mark the fourth month since the movement erupted in mid November, over since-scrapped fuel tax hikes and the high cost of living.

Named after the high visibility vests French drivers have to keep in their cars and worn by protesters, the revolt quickly swelled into a broader movement against Macron and his reforms.

However, the weekly demonstrations, held every Saturday in Paris and other cities, have been generally getting smaller since December, when Paris saw some of the worst vandalism and looting in decades.

After the spike in violence, Macron offered a package of concessions worth more than 10 billion euros ($11 billion) aimed at boosting the incomes of the poorest workers and most pensioners.
His government ordered police to crack down on the protests in January, leading to complaints of police brutality after a series of injuries.

The 41-year-old former investment banker also launched a series of national debates which are aimed at determining what polices people want the government to focus on.
Saturday's protests coincide with the end of the debates.