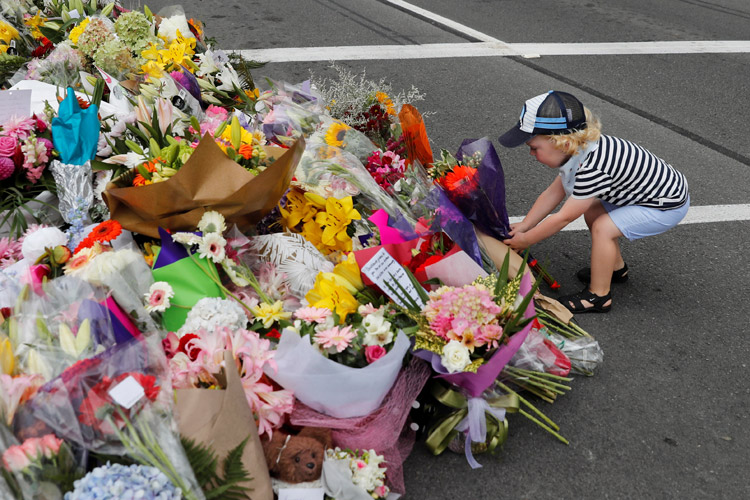 A child places flowers at a memorial as a tribute to victims of the mosque attacks, near a police line outside Masjid Al Noor in Christchurch, New Zealand, on Saturday. Jorge Silva/ Reuters

CHRISTCHURCH: An imam who was leading prayers at a Christchurch mosque when a gunman brandishing semi-automatic weapons mowed down his congregation said on Saturday that the Muslim community’s love for New Zealand would not be shaken by the massacre.

“We still love this country,” said Ibrahim Abdul Halim, imam of Linwood Mosque, vowing that extremists would “never ever touch our confidence.”

Halim gave a harrowing account of the moment during Friday prayers when gunshots rang out in the mosque, replacing peaceful reflection with screaming, bloodshed and death.

“Everyone laid down on the floor, and some women started crying, some people died immediately,” he said.

But, he said, New Zealand Muslims still felt at home in the south Pacific nation.

“My children live here” he said, adding, “we are happy.”

He said the majority of New Zealanders “are very keen to support all of us, to give us full solidarity,” describing how strangers exchanged hugs with him on Saturday.

“They start to... give me big hug, and give me more solidarity. This is something very important.”

The attacks on two mosques by a right-wing extremist left 49 people dead.