California's mentally ill Homeless need place of their own to heal 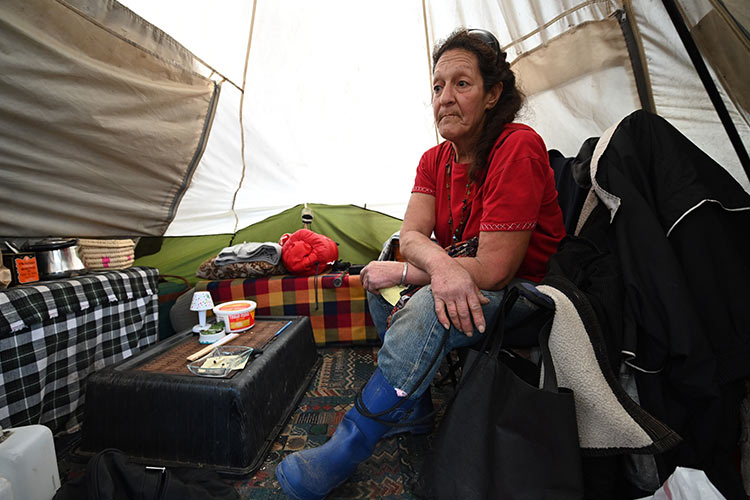 Rocky, 59, who has been homeless for three years, sits in her tent in a public park in the Van Nuys neighborhood in the San Fernando Valley region of Los Angeles, California. Photographer: Robyn Beck/AFP

Rocky was 56 years old when she found herself living on the streets for the first time in her life, penniless and hungry, feeling that the rest of the world had left her behind.

She quickly slid into a deep depression, a mental state common among people experiencing such a traumatic change in their lives.

At that time, three years ago, her fragile psyche sapped her energy as she sought a place to pitch her tent in a park in Los Angeles County, which has the highest rate of Homelessness in the United States.

The county has about 53,000 Homeless residents, 27 percent of whom suffer from some kind of mental illness, be it schizophrenia, bipolar disorder or severe depression like Rocky's.

"It hasn't been easy," said Rocky, now 59, her hair graying and wrinkles forming on her face.

"Never been Homeless before," she adds, almost whispering the word out of shame.

Rocky is the name she adopted when she hit the streets.

She has forgotten what it is like to have a truly good night's rest: she sleeps with a camping lantern that lights up at the least sound, and says she carries a firearm that she uses to scare off anyone who tries to rob or attack her in the night.

"Living out on the street, you know, is a stressful situation that can in and of itself exacerbate a mental health condition or symptoms of mental illness," said Benjamin Henwood, a social worker who carries out research for the University of Southern California.

California boasts the fifth-largest economy in the world, but has the highest poverty rate in the United States, if the cost of living is taken into account.

There is no part of Los Angeles that doesn't have its own Homeless community: from the tourist-filled Hollywood Walk of Fame to the city centre, there are pockets of down-and-outs clustered in squares, parks and along highways.

Dirty and dressed in rags, they can often be seen talking to themselves, screaming or swaying to and fro — all things that experts say indicate a mental condition or possibly drug abuse.

Experts agree that the first step towards addressing mental illness among the Homeless is simply finding them a place to live.

"Housing should be the foundation for recovery, not the culmination of recovery," said Todd Lipka, head of the NGO Step by Step, which helps Homeless people with mental illness find places to live. 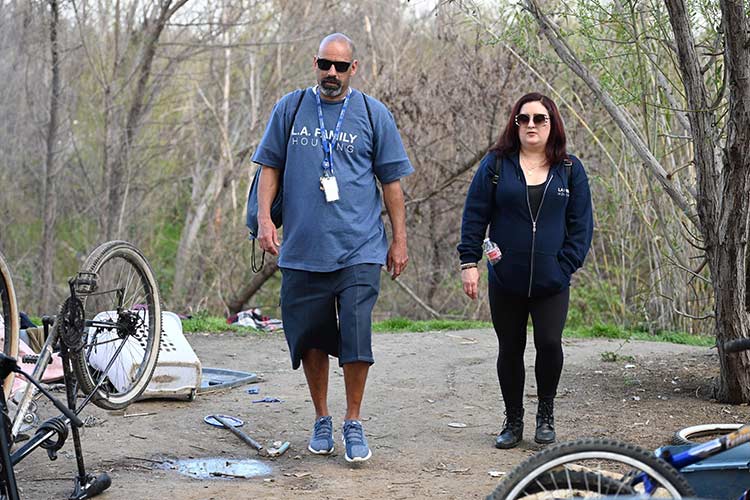 "If you have a mental illness, recovery in the street is almost impossible because you're spending all your energy simply surviving," he said.

Other groups such as LA Family Housing — which services the area where Rocky lives — also look for apartments for people on the street in an area that has sky-high costs of living.

"We need more permanent supportive housing to be built and we need it now," says Eric Montoya, an outreach coordinator with LA Family Housing who is looking for a place for Rocky.

Both LA county and the city itself are passing measures to spend billions of dollars on building social housing, but the projects have not been completed yet.

The legislative measures also aim to improve social services that are currently overwhelmed.

Rocky received the green light for accommodation six months ago through another group that specializes in helping people with mental illness find homes, as well as getting them access to therapy.

"I was very depressed, wanting to use drugs. Everybody is using," she said with tears in her eyes, recalling that in her youth, she was an addict but has been clean for almost 30 years.

"How much lower you can get?"

Rocky's story is full of tragic twists and turns, and she is not keen to relive them.

Her husband earned a good salary, but she left him to get away from his drug and alcohol abuse.

Then she had a boyfriend in San Diego who took everything she had and forced her to move far away from California.

She says she was in Idaho for a while, working on ranches where she looked after horses, before returning to Los Angeles to look after her former husband, who was extremely ill with cirrhosis.

But she says he was also suffering from dementia and did not know who she was. He refused to see her.

Then she ended up on the streets, with only her three suitcases and the grief of being rejected multiple times.

After drifting through several shelters, she wound up in the park in Van Nuys, where she pitched her tent under some trees.

Rocky keeps the inside of the tent tidy, her bed neatly made, and has a cooking area and even an ingeniously improvised shower.

She shows off her campsite with pride, even if she can't help thinking of a future she has lost.

"I want to be able to close the door and lock it," she said dreamily.

"I'll have running water, hot water! And I'll be secure, safe, when I go to bed."