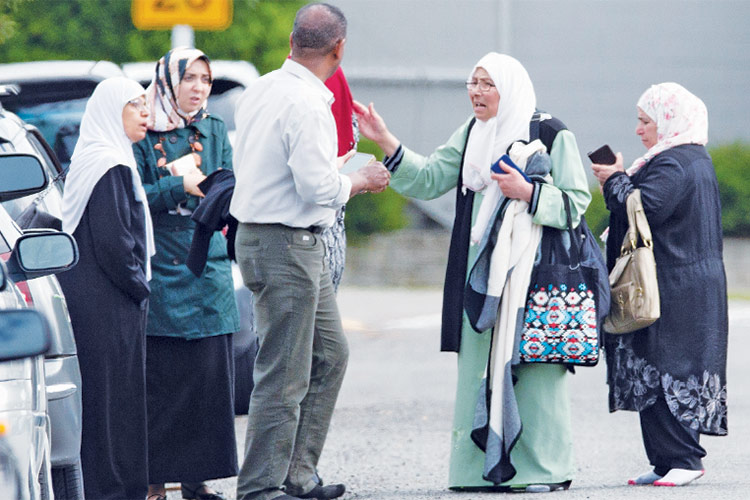 Members of a family react outside the Al Noor mosque in Christchurch on Friday. Reuters

Leaders around the world expressed disgust and sorrow at the killing of at least 49 people in New Zealand mosques on Friday, and some also expressed anger at what they described as the demonisation that fuelled such attacks.

From Donald Trump to Angela Merkel expressed solidarity with the people of New Zealand and deplored what the White House called an “act of hate.” The response from some Muslim countries went further, blaming politicians and the media for stoking that hatred.

Saudi Arabia condemned “in the strongest terms possible the shootings at two mosques” in the city of Christchurch.

The foreign ministry said one Saudi citizen was lightly wounded in the attacks but was recovering.

“I blame these increasing terror attacks on the current Islamophobia post-9/11 (where) 1.3 billion Muslims have collectively been blamed for any act of terror,” Pakistani Prime Minister Imran Khan wrote on social media. Turkey’s President Recep Tayyip Erdogan condemned the deadly attack on two mosques in New Zealand, saying it illustrated the growing hostility towards Islam “idly” watched by the world.

“With this attack, hostility towards Islam, that the world has been idly watching and even encouraging for some time, has gone beyond individual harassment to reach the level of mass killing,” Erdogan said at the funeral of a former Turkish minister. New Zealand Prime Minister Jacinda Ardern said some of the victims may have been new immigrants or refugees.

“They are us,” she said. “The person who has perpetuated this violence against us is not. They have no place in New Zealand.”

Britain’s Queen Elizabeth, who is New Zealand’s head of state, said she was “deeply saddened by the appalling events.”

British Prime Minister Theresa May offered deepest condolences “after the horrifying terrorist attack in Christchurch. My thoughts are with all of those affected by this sickening act of violence.”

US President Trump described the attack as a “horrible massacre” and said the United States stood by New Zealand.

In Europe, German Chancellor Merkel mourned “with the New Zealanders for their fellow citizens who were attacked and murdered out of racist hatred while peacefully praying in their mosques.”

Norwegian Prime Minister Erna Solberg said the attack brought back memories of 2011, when anti-Muslim extremist Anders Breivik killed 77 at a youth gathering on a Norwegian island: “It shows that extremism is nurtured and that it lives in many places.”

Al Azhar University, Egypt’s 1,000-year-old seat of Islamic learning, called the attack “a dangerous indicator of the dire consequences of escalating hate speech, xenophobia and the spread of Islamophobia.” Malaysian Prime Minister Mahathir Mohamad said he hoped New Zealand “will arrest these terrorists and do the necessary under the law of the country.”

“An attack against peaceful people gathering for prayer is shocking in its cruelty and cynicism,” Russian President Vladimir Putin said.

Police in Canada stepped up security patrols at mosques around the country following attacks in New Zealand that Prime Minister Justin Trudeau condemned as “absolutely appalling.”

Italy’s far-right Interior Minister Matteo Salvini condemned the deadly attacks on New Zealand mosques and asked for “compassion” for anyone who might blame him for the killings.