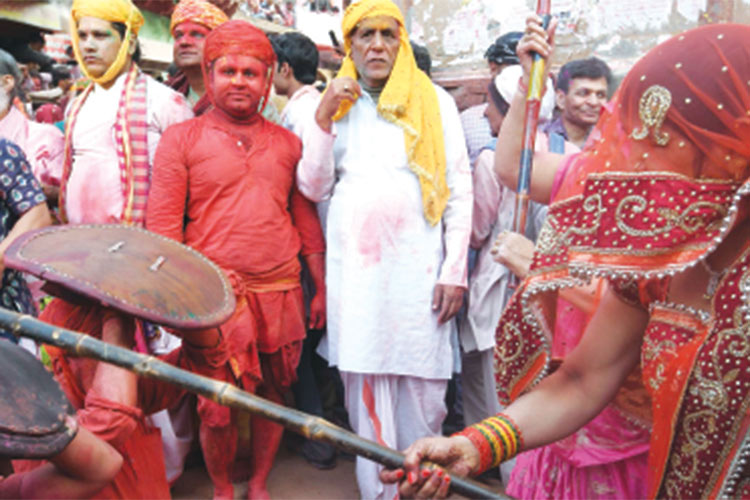 Women beat men with sticks during a Lathmar Holi celebration in the village of Barsana in Uttar Pradesh on Friday. Agence France-Presse

“The joint rallies of the BSP-SP-RLD will start in a phases manner in the state after Holi,” a senior SP leader told IANS.

He said the joint rallies of the three parties will kick off from the first day of Navratra in western Uttar Pradesh.

“Mayawati, Akhilesh and Ajit Singh will address their first joint rally in Deoband area of the Saharanpur district of the state,” he said.

The party leader said that several such joint rallies will be organised in various parts of the state.

The SP, BSP and the RLD have announced to contest the 2019 Lok Sabha elections in alliance against the ruling Bharatiya Janata Party (BJP) and the Congress.

The BJP-led National Democratic Alliance (NDA) had won 73 out of 80 seats in the state in 2014, while the SP won five, the Congress two and the BSP scored nil.

Urging party workers and leaders to work whole-heartedly to ensure the victory of the BSP-SP-RLD coalition, the former Uttar Pradesh Chief Minister alleged that the Bharatiya Janata Party (BJP) would use “all tricks” to win the elections.

“Mayawati said the BSP-SP coalition has emerged as a strong alternative in Uttar Pradesh, Uttarakhand and Madhya Pradesh,” a BSP statement said. The BSP leader asked her colleagues to keep an eye on EVMs and said the Modi government had turned out to be a government of failed promises.

The BJP, she said, had brought “achche din” only for itself, leaving behind the common man.

It said that all the three parties in the alliance had were now together, leaving behind their earlier differences, to defeat the BJP.

Separately, two members of Sohail Saifi gang, accused of robbing Rs31 lakh from two persons and attempting to kill them, were arrested from Meerut in Uttar Pradesh, a police officer said on Thursday.