US affirms plan for 6 nuclear plants in India - GulfToday

US affirms plan for 6 nuclear plants in India 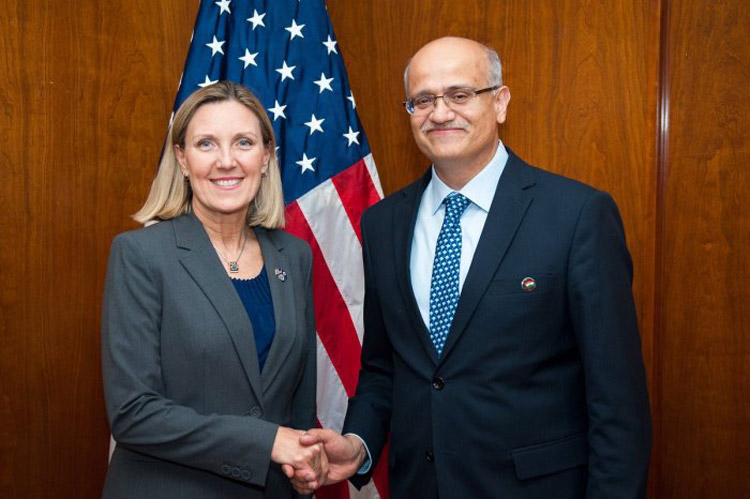 NEW YORK: The slow-moving US plans to set up six nuclear power plants in India have received a boost as the two nations reiterated their commitment to strengthen security and civil nuclear cooperation during the 9th India-US Strategic Security Dialogue.

A joint statement issued on Wednesday after the dialogue, where the Indian side was headed by Foreign Secretary Vijay K. Gokhale, said that Washington “reaffirmed its strong support of India's early membership in the Nuclear Suppliers Group.”

“They committed to strengthen bilateral security and civil nuclear cooperation, including the establishment of six US nuclear power plants in India,” it added.

The statement also said that both countries declared their “commitment to work together to prevent the proliferation of weapons of mass destruction and their delivery systems and to deny access to such weapons by terrorists and non-state actors.”

The US delegation to the dialogue held in Washington was led by Andrea Thompson, Under Secretary of State for Arms Control and International Security.

The statement seeks to breathe new life into expected results of the civil nuclear cooperation agreement between the two countries, which have failed to live up to the hopes since it was signed in 2008 during the Prime Ministership of Manmohan Singh and the Presidency of George W. Bush.

The law limiting civil liability for nuclear damages from the plants passed in 2010 was meant to overcome a stumbling block for US companies to set up nuclear power plants in India.

However, financial problems of the US company Westinghouse that had agreed in 2016 to build six plants in Andhra Pradesh put the plans on hold when it went into bankruptcy the next year.

Now owned by Brookfield Asset Management, the US-based Westinghouse has received the backing of the Trump administration for the project and US Energy Secretary Rick Perry promoted it during a visit to India last year.

India has ambitious plans to increase its nuclear electric generation capacity to meets its growing needs with clean energy. Russia is the leading player in the nuclear power sector in India.

Ahead of the dialogue, the third round of the US-India Space Dialogue was held on Tuesday at which the two countries “discussed trends in space threats, respective national space priorities, and opportunities for cooperation bilaterally and in multilateral fora”, the statement said.

Also on Tuesday, Gokhale and David Hale, the Under Secretary of State for Political Affairs held India-US Foreign Office Consultations.

A statement issued after the meeting by the State Department said that they affirmed “the importance of joint leadership to strengthen the rules-based order in the Indo-Pacific region.”

“Recognising that the US and India share complementary visions for the Indo-Pacific, they agreed to deepen cooperation toward their joint goals in the region, including in conjunction with other Indo-Pacific partners,” it added.

The discussion between the two diplomats also covered the situations in areas of importance to the US — North Korea, where last month's summit between US President Donald Trump and North Korean leader Kim Jong-un on denuclearisation failed; Iran, where Trump has pulled out of the multinational denuclearisation agreement and imposed sanctions on Tehran, and Venezuela, where the US has recognised opposition leader Juan Guaido as its president and wants Nicolas Maduro to step down following elections marred by irregularities.

Trump wants India to play a major role in the Indo-Pacific region where the two countries act as bookends of democracy, a task Prime Minister Narendra Modi has cautiously embraced without making it appear a direct challenge to China.

India and the US have also stepped up multilateral cooperation with the other two major democracies in the region, Australia and Japan.