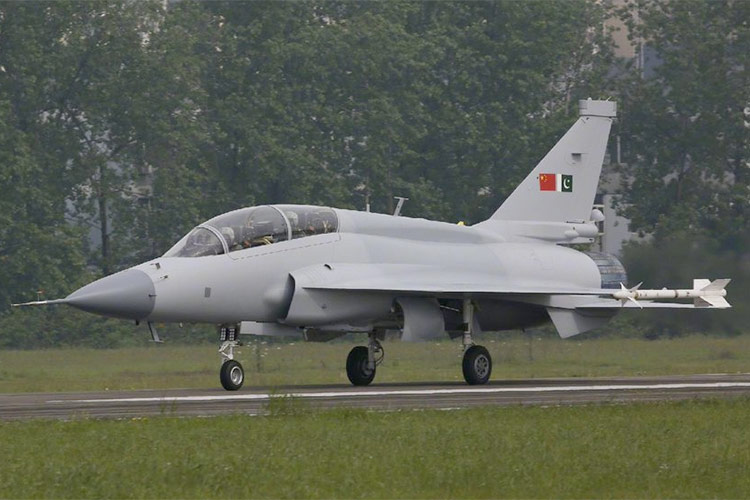 The announcement follows recent skirmishes with India over disputed Kashmir during which Pakistan said it shot down two Indian planes and captured a pilot, who was later returned to India.

An air force statement says a JF-17 multi-role fighter aircraft fired the new missile, which has “day-and-night capability to engage a variety of targets with pinpoint accuracy.”

A “smart” weapon is typically military language for a guided missile.

PAF Chief Mujahid Anwar was quoted as saying that “Pakistan is a peace-loving nation but if subjected to aggression by adversary, we will respond with full force.”

There was no further information on the type of missile fired.

According to a media report, the United States is urging Pakistan to see the “urgency” of taking action against “terrorists” as the UN Security Council (UNSC) takes up a resolution declaring Jaish-e-Mohammad (JeM) chief Masood Azhar a global terrorist.

It said quoting the State Department that US Secretary of State Michael R. Pompeo emphasised the need for an immediate action against terrorists at a meeting with Indian Foreign Secretary Vijay Gokhale in Washington.

The UNSC is expected to take up a resolution on Wednesday that seeks to declare the JeM chief a global terrorist. But China, which has vetoed similar moves in the past, reminded the UNSC that “a responsible solution” can come only through discussions.

China urged the international community to also focus on the Kashmir dispute while demanding such issues. “China’s position on the designation of a terrorist by the 1267 Sanctions Committee is consistent and clear,” said Chinese Foreign Ministry spokesman Lu Kang when asked about China’s stand on the issue.

Officials said that the United States, which jointly moved the resolution along with Britain and France, wants the UNSC to adopt the resolution this time. Besides asking China not to veto the move, Washington is also using its influence in Pakistan to soften its opposition, they added.

As Pompeo met his Indian counterpart in Washington, US National Security Adviser John Bolton spoke telephonically with Foreign Minister Shah Mahmood Qureshi to discuss this and other issues with him.

After the telephone call, Bolton released a brief message on Twitter, which includes the points Secretary Pompeo discussed with the Indian foreign secretary.

“Spoke with Pakistani FM Qureshi to encourage meaningful steps against JeM and other terrorist groups operating from Pakistan,” he tweeted.

“The foreign minister assured me that Pakistan would deal firmly with all terrorists and will continue steps to de-escalate tensions with India.”

Pakistan Foreign Office (FO) also issued a statement which said that Qureshi informed r Bolton that the Indian aggression of Feb.26 was a violation of Pakistan’s territorial integrity and sovereignty as well as the UN Charter. “Pakistan’s response was purely in self-defence against external aggression,” he said.

The FO spokesperson took to Twitter and said, “More than 30 Indian journalists covered the Kartarpur groundbreaking ceremony in Pakistan last year. They also met PM and were hosted by FM for a dinner during their stay.”

“Regrettable that India has not given visas to Pakistani journalists for the Kartarpur meeting tomorrow. Hope the #PakKartarpurSpirit and meeting tomorrow will bring a change for the better for people of both countries,” he added.

Pakistan and India will be exchanging delegations to discuss the draft agreement of Kartarpur corridor between the two countries.

Pakistani delegates will visit New Delhi on March 14 to discuss the draft agreement on Kartarpur corridor, followed by the return visit of the Indian delegation to Islamabad on March 28.