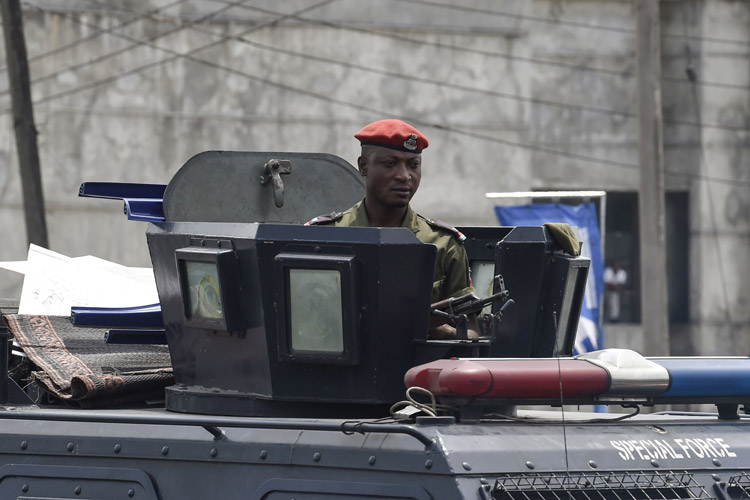 A policeman stands in an armoured Personel Carrier (APC) as protesters take part in a demonstration against the suspension of governorship elections in Port Harcourt, Rivers State.

NIAMEY: Niger said Wednesday it had killed 33 Boko Haram "terrorists" and seized vehicles and weapons in an operation in the Lake Chad region in the country's southeast.

"Thirty-three terrorists (were) killed" while there were no losses on the army's side, it said.

An "armoured vehicle" was destroyed, while two other vehicles, two motorcycles, a 120-millimetre mortar, 10 AK-47 assault rifles, two 60mm shells and 3,736 rounds of all calibres were seized, it said.

The operation began on Saturday, it said — a day after seven police and 38 militants were killed near Gueskerou in the southeastern region of Diffa, according to a government toll.

Diffa borders the birthplace of Boko Haram in northeastern Nigeria and has suffered a string of cross-border raids and population displacement.

An estimated 27,000 people have been killed and two million others displaced since Boko Haram launched its insurgency in 2009.

Lake Chad, which straddles parts of Niger, Nigeria and Chad, has borne the brunt of the militants’ hit-and-run attacks.

In November, around a dozen girls were taken in raids on several border villages, while seven local employees of a French drilling firm and a government official were killed after suspected Boko Haram gunmen stormed their compound.

On February 16, seven Nigerien soldiers were killed in an attack on the border village of Chetima Wangou.