Long recovery ahead for eastern Ghouta 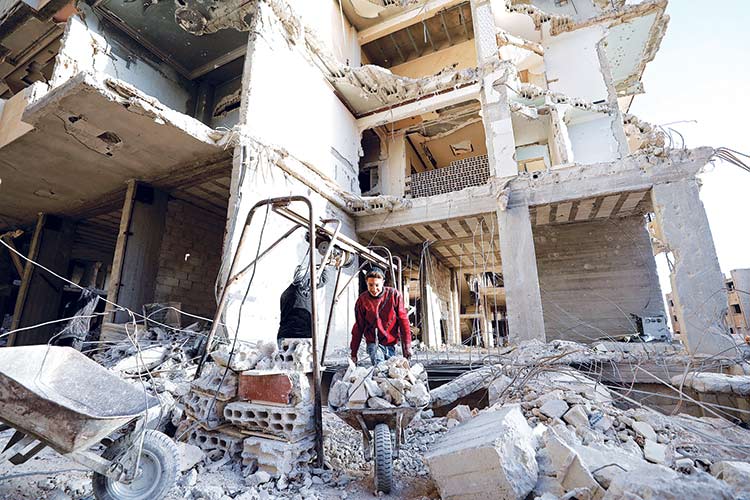 Workers at a construction site in Ein Terma, a district of eastern Ghouta. Reuters

EASTERN GHOUTA: Hunkered near one of Syria’s hottest front lines for seven years, the eastern Ghouta district of Ein Terma sustained more damage than most areas in the conflict.

Its markets are now full and children throng the streets where shells were falling a year ago. But for the people who have returned to live there, the recovery is gradual.

As the eighth anniversary of the civil war arrives this week, Ein Terma’s battered streets attest to the long road ahead for Syria’s war-smashed towns and cities.

Many inhabitants have lost neighbours, friends or relatives as the population scattered through years of conflict. Despite government work, rubble still clogs many streets and the water and electricity supply is only partial.

Jobs are scarce, and for people who stayed in the area when it was controlled by the rebels, family paperwork for births and deaths in that period must be done anew.

Samiha Fares and her five children left their home in 2012, early in the war, as rebels gained control over the district.

She had been working for the Ein Terma municipal government and the rebels threatened her children and installed rockets on the roof of her house, she said.

The family quickly moved to Jormana, a district located just across the front line from their old home in Ein Terma. When government forces recaptured the area at the end of March last year, Fares returned with her children.

Their house was empty and scorched by fire.

“My children calmed me. At least our house was still there and we could live in it,” she said.

She found an old carpet and mattresses and blankets to sleep on. But the financial situation was difficult.

As the rebels surrendered, people who did not want to come back under government control left to opposition-held Idlib in Syria’s far northwest.

According to the United Nations commission of inquiry on Syria, up to 50,000 people were “evacuated” in this way to the northwest.

The Syrian war, which has killed hundreds of thousands of people, has driven around half of Syria’s pre-war population from their homes, 5.7 million of them living as refugees in neighbouring countries.