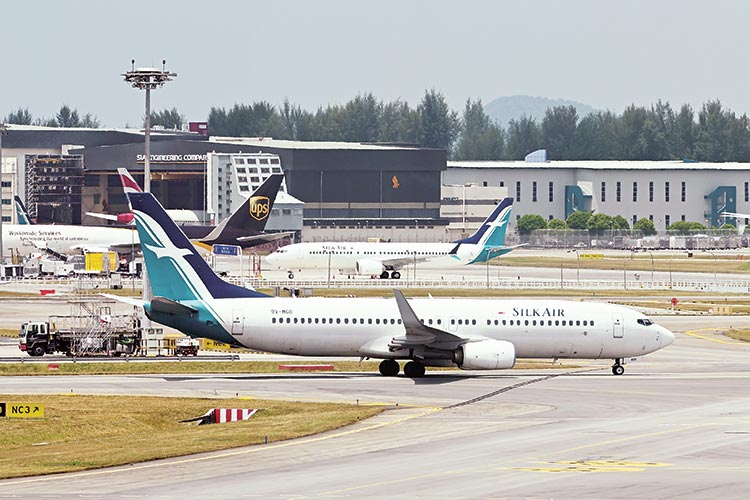 A SilkAir Boeing 737 MAX aircraft is parked on the tarmac of Changi International Airport in Singapore on Tuesday. Agence France-Presse

Muscat: Oman on Tuesday suspended takeoffs and landings by Boeing 737 MAX planes at its airports, said its aviation authority, making it the latest country to do so after a deadly crash in Ethiopia.

The Public Authority for Civil Aviation “is temporarily suspending operations of Boeing 737 MAX aircraft into and out of all Omani airports until further notice,” it said in a statement on Twitter.

A number of countries have grounded Boeing’s 737 MAX 8 medium-haul workhorse jet in response to the Ethiopian Airlines crash that killed all 157 people on board.

The Nairobi-bound plane was the same type as the Indonesian Lion Air jet that crashed in October, killing 189 passengers and crew - and some officials have detected similarities between the two accidents.

Singapore: Singapore’s aviation regulator on Tuesday completely banned the use of Boeing 737 MAX aircraft in the country’s airspace.

The Civil Aviation Authority of Singapore (CAAS) said it was “temporarily suspending operation of all variants of the Boeing 737 MAX aircraft into and out of Singapore” in light of the two recent accidents.

Indonesia: Indonesia said it was grounding its 11 jets of the 737 MAX 8 type.

Inspections of the aircraft would start on Tuesday and the planes would remain grounded until they were cleared by safety regulators, Director General of Air Transport Polana Pramesti told reporters. South Korea: South Korea’s transport ministry said it had advised Eastar Jet, the nation’s only airline to operate Boeing 737 MAX 8s, to ground its two planes. The budget airline had agreed to suspend its use of the aircraft starting on Wednesday, it added.

Mongolia: The Mongolian Civil Aviation Authority said on Facebook it had ordered the state carrier MIAT Mongolian Airlines to ground the sole Boeing 737 MAX 8 aircraft in its fleet.

Australia: Australia barred Boeing 737 MAX planes from its airspace. Fiji Airways is the only 737 MAX operator affected by the Australian ban, according to Australia’s Civil Aviation Safety Authority, as Singapore-based SilkAir’s planes were already covered by a ban imposed by the city-state.