4 cops dismissed for harassing a couple 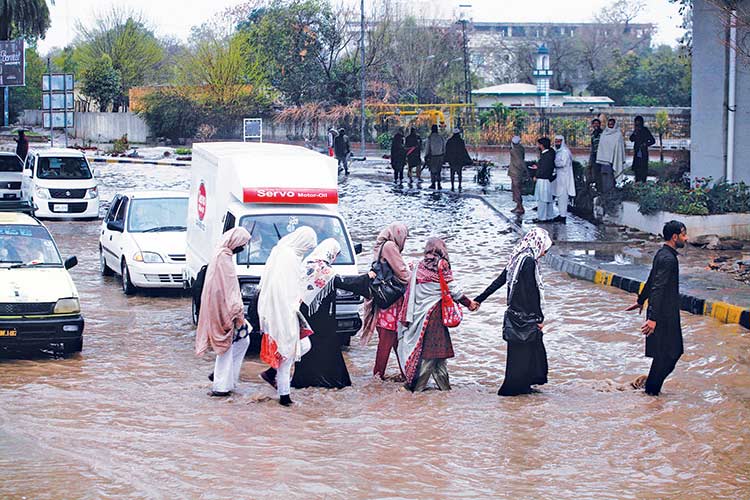 Pakistani students make their way through a flooded street following a heavy rainfall in Peshawar, Pakistan, on Monday. Associated Press

ISLAMABAD: Karachi police on Tuesday dismissed four cops from service for harassing and manhandling a couple at Sea View.

A policeman in uniform can be seen in a video — available with the media and shared on social media — while manhandling a woman and trying to snatch a cell phone from the man who was recording the video.

“I was standing with my wife when they [policemen] came and demanded money while pointing guns [at us],” the man can be heard saying in the video.

Senior Superintendent of Police (SSP) South Pir Mohammed Shah said that the incident took place on Sunday morning. He said that three policeman were found directly involved in the incident, adding that few policemen bring a bad name to the entire force.

He said that Assistant Sub-Inspector (ASI) Zulfiqar Ali came to Sea View while abandoning his duty. The ASI and policemen Ahmed Khan, Zahid and Qurban have been dismissed from service.

“The fourth policemen, Qurban, was not on the spot but is hand in gloves with the rest of three,” said the SSP. “Initial investigation reveals that the four policemen used to work as a gang to harass and extort couples.” He also asked people who experienced such “unfortunate behaviour” by the police to come forward and report their ordeal. He assured that strict action would be taken against those involved. He mentioned that earlier four personnel of the Police Qaumi Razakars (PQR) force were arrested and later punished for extorting money from couples at Sea View.

Separately, the government has introduced regulatory duty in flat rates for six different slabs according to import value of mobile phones in a move to lower tax on ordinary sets as compared to those having higher prices.

Previously, the regulatory duty on import of mobile phones valuing up to $60 was Rs250 per set, while it was 10 per cent and 20pc of the import value for those with a price ranging between $60 and $130 and those valuing more than $130, respectively.