Walking through the Yorkshire countryside on a very British vacation - GulfToday

Walking through the Yorkshire countryside on a very British vacation 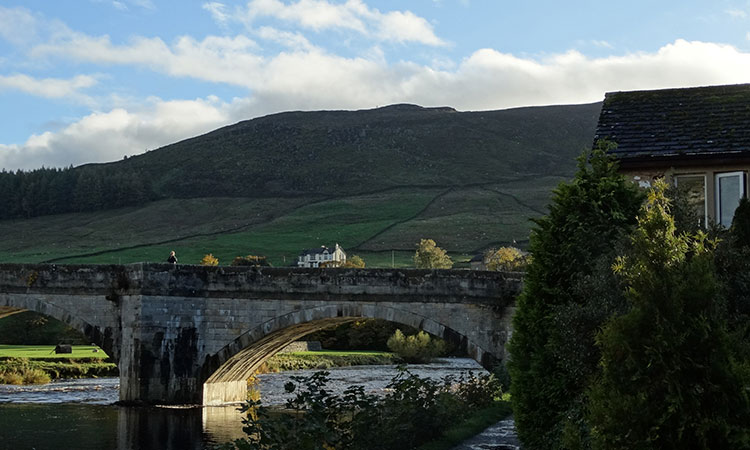 A high Yorkshire fell rises behind the River Wharfe and the five-arch bridge, in Burnsall. Dave Hage/TNS

For Americans who fell in love with the England of buttered scones and Agatha Christie, a visit today can be jarring. London has become a city of vaping millennials and unfortunate skyscrapers, while even provincial capitals such as York have embraced Colonel Sanders and BabyGap.

It’s a better place, on balance, than when my wife and I lived there 35 years ago — more vibrant and open-minded. Yet even so, one sometimes yearns for the postcard version, the England of tea and tweeds.

And so we found ourselves one foggy night in the North Yorkshire village of Kettlewell, sipping a pint of Tetley’s at the King’s Head pub and drying our boots before a Tudor fireplace as wide as a two-car garage.

We had come to the Yorkshire Dales for a quintessential English holiday — walking — in a quintessentially English locale. North Yorkshire is a place of breathtaking beauty, a landscape of deep, winding river valleys and high rolling fells — the green hillsides so steep that even horses step carefully, the crests so high that their rounded tops disappear into wisps of fog. It’s the most beautiful place in England, for my money, and one of the prettiest spots on Earth.

It’s also a place of great continuity, where sheep have grazed the same meadows for 300 years and an inn can stay in the same family for four generations.

The setting sun threw light on a low fell west of Burnsall in the Yorkshire Dales. Dave Hage/TNS

Yorkshire sheep, near Arncliffe, in the Dales. Dave Hage/TNS

The Shambles, a famously narrow lane in the city of York. Dave Hage/TNS

Buildings in Yorkshire, like this Norman church near Arncliffe. Dave Hage/TNS

Thus on Day 2, fortified by an English breakfast of poached eggs, broiled tomato, bacon, beans, smoked salmon, black pudding, tea, coffee, sausages and toast with marmalade, we set out from Kettlewell to ascend Yew Cogar Scar, a high, wooded fell that rises just east of town. Mist shrouded the valley as we set out, lending the woods a hint of mystery and coating every mossy rock with a dripping wet that put us in mind of woodland fairies and Tolkien’s Frodo Baggins.

The fog had cleared so that, looking west, we could see clear across the valley of the River Wharfe to the vast hillside on the far side, its green meadows quilted by gray stone walls and dotted with white sheep. Turning east, we could see our path zigzagging down a long hillside of rusty bracken and descending into Littondale, a valley of stone-built villages and Norman churches.

After an easy descent, we made our way into Arncliffe (from the Norse for Eagle’s Cliff), a tiny village straight out of Emily Bronte. Though it consists of little more than a modest green, a church and a clutch of fieldstone houses, it is home to a well known 18th-century pub, the Falcon.

By midafternoon we had gained the summit of a second fell, this one more windswept and lonely. Although Yorkshire’s valley bottoms are green and friendly, the fell tops can be desolate — places where you have only the sheep for company, and sometimes even they desert you.

One test of a good vacation is the question: Would we do it again? If that means heading back to Yorkshire for more hiking, we would do it in a minute. If that means using a sherpa service, the answer is not so clear.

On balance we were happy with the company we chose, Contours Walking Holidays.

More than once we found ourselves at the edge of a meadow, utterly flummoxed about how to cross it and quite unsure whether our destination was just around the corner or another four hours away.

Then, too, budget-minded travelers should consider the cost. We paid about $900 for a package that included four nights’ accommodation, with breakfasts so hearty they doubled for lunch, as well as a packet of maps, a useful introduction to hiking in the Dales and the luggage transfers.

Tiny Malham (population 238) is a popular hiking destination because of nearby scenic features such as Malham Cove and Gordale Scar. It lies at the confluence of several excellent footpaths and has several inns as well as a working smithy where the blacksmith gives demonstrations and sells her wares. Nearby Grassington, the metropolis of the region with a population of 1,100, has hotels, provisioners, hiking outfitters, gift shops and innumerable teashops lining a pretty village green.

By the time our third day’s hike was finished and we were packing for home that skepticism had been swept aside by a deep infatuation with the Dales. Would I do it again? I’d go back tomorrow.