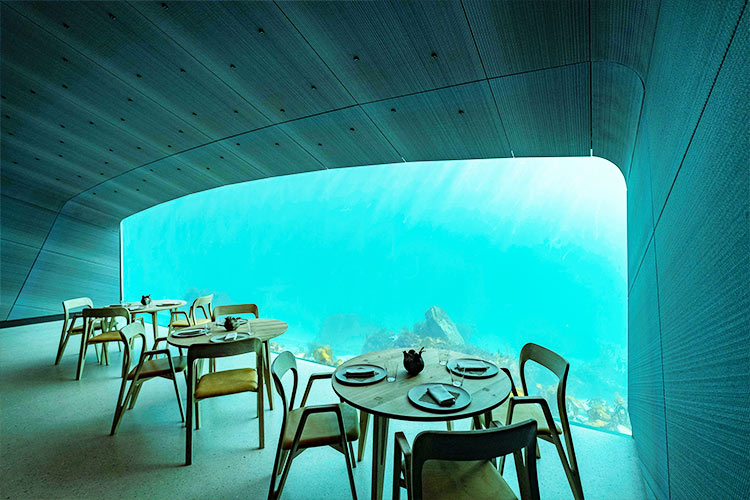 nteriors of "Under", a semi-submerged restaurant beneath the waters of the North Atlantic which will be open to public.

BAALY: Europe's first underwater restaurant opens in Norway on Wednesday with more than 7,000 customers booked in to eat among the fish.

Situated on the southern tip of Norway, the restaurant looks like a large concrete tube partly submerged in the North Sea. It is called Under, which also means "wonder" in Norwegian.

It was designed by Norwegian architecture firm Snoehetta, which also created the Opera house in Oslo and the National September 11 Memorial Museum in New York.


"The fascination is just this movement from above water to underwater through the building ... The big window exposes the underwater not like an aquarium, it's the real thing.

Entering Under initially feels like going into a sauna, as wooden planks cover its upper section, but an eight-metre flight of stairs leads down to a large dining area that sits about 40 guests, walled by a gigantic transparent window to the ocean.

Traedal Thorsen said the construction can cope with very harsh weather and is shaped in such a way that it can withstand what he called "the wave of the century".

More than 7,000 customers booked in to eat among the fish.

It was designed by Norwegian architecture firm Snoehetta.

It is called Under, which also means "wonder" in Norwegian.

The restaurant looks like a large concrete tube partly submerged in the North Sea.

The restaurant is laid out so there are minimal reflections in the glass wall, which fills the room with natural light during the day, filtered by the greenish colour of the water.

A full 18-course meal, based on local ingredients and seafood, can cost up to 3,700 crowns ($430) per person including drinks.

"The goal is to get 50 percent of the guests who eat there to spend the night in the hotel as well... We expect around 12,000 people eating dinner every year.

Under opens on Wednesday for friends and family of the owners and the first paying guests will be able to visit from early April.

There are only a handful of underwater restaurants around the world, mainly found in tropical waters like the Maldives in the Indian Ocean.