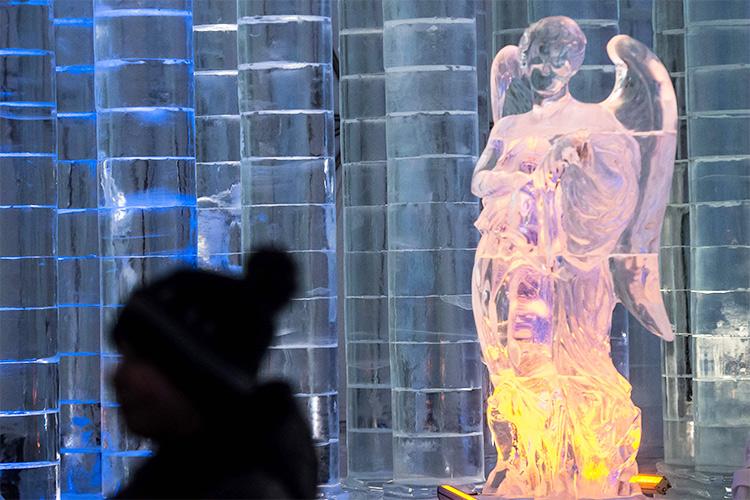 SLOVAKIA: A young nun breathes deeply as she peers up at a statue of an angel bathed in softly coloured light streaming through a church, and as she exhales, you can see her breath.

Instead of wood or bricks and mortar, this chilly house of worship perched among the snowy peaks of Slovakia's High Tatra Mountains has been built from massive crystal-clear blocks of ice.

At 1,285 metres (4,200 feet) above sea level, the ice replica of Saint Peter's Basilica in Rome is higher than any of Slovakia's 4,158 churches, more than half of them Roman Catholic.

Although it has not been consecrated, another visitor, Zlatica Janakova from southern Slovakia, says it feels like a real church.

"All of nature is inside and around this temple," she adds, gazing at the surrounding alpine vistas.

"It's so good for your soul; it provides you with tranquillity

Englishman Martin, who declined to give his surname, describes it as a "beautiful, religious place, so peaceful and calm".

Since 2013, ice sculptors have flocked to the Slovak Tatra mountain hamlet of Hrebienok every winter to build a Tatra Ice Temple, or scaled-down replica of a famous church using only crystal-clear ice blocks.

This year, it's an 11-metre (36-foot) tall version of the 16th-century Vatican basilica, complete with the imposing two half-circle wings of Bernini's colonnade.
A quarter of a million tourists last year took the short funicular ride up the mountain to see the ice replica of Barcelona's soaring and intricate Sagrada Familia.

A team of 16 sculptors from Slovakia, the Czech Republic, Poland, Wales and the United States worked 12 hours a day for a month to create this year's ice temple.

On Sundays, the venue vibrates with the sounds of sacred music concerts.

The interior boasts sculptures modelled on the works of Italian masters side-by-side with those of chamois, marmots and other wildlife native to the High Tatras.

"I gave them a free hand with the decoration, so each artist added their signature style to the sculptures," Bakos said.

The building material, namely 1,880 ice blocks weighing a total of 225 tonnes, was imported from neighbouring Poland.

"We tried different suppliers, from the Netherlands, England, Norway and Hungary, but Polish ice seemed to have the highest quality, it really looks like glass if kept cold enough," says Rastislav Kromka, technical director of the Tatra Ice Temple. 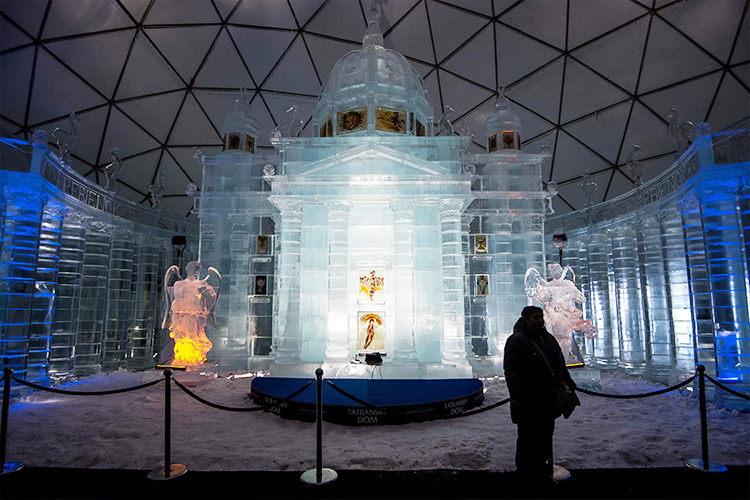 A young nun takes a deep breath as she peers up at a statue of an angel bathed in softly coloured light streaming through a temple and, as she exhales, a puff of vapour appears from her lips.

With an unusually warm winter threatening to melt details on their sculpture, Bakos and his team covered it with a geodesic dome, measuring 25 metres in diameter.

They also installed refrigeration units to ensure a bone-chilling minus 10 degrees Celsius (14 degrees Fahrenheit) to keep the ice solid.
"Cold wind was blowing in our faces from the AC (air conditioning) all day long.

"Once we were done, I didn't even want to open the freezer at home anymore," he jokes.

More than 15 carpenters helped sculptors with the demanding task of stacking the ice blocks, each weighing 125 kilogrammes (275 pounds).
"It took us more time to stack the blocks than to carve them," Bakos said.

"Ice is also an extremely fragile material, you must be very gentle with it or details tend to fall off. We used only water to glue the pieces together," he said. 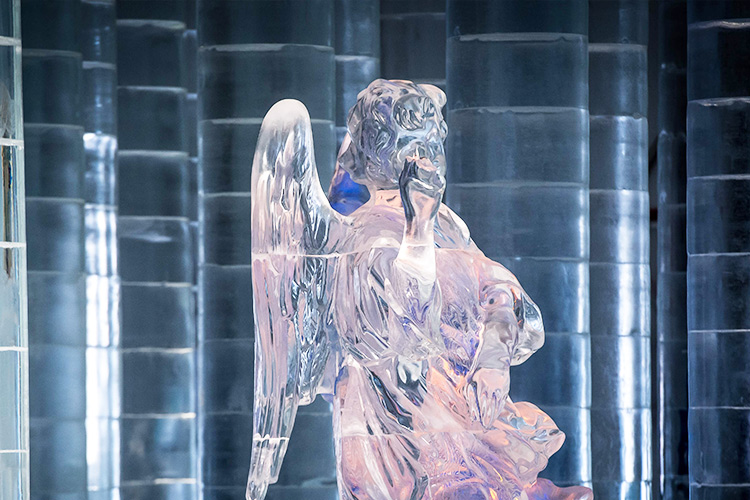 Instead of bricks and mortar or wood, this chilly house of worship perched between the snowy peaks of Slovakia's High Tatra mountains has been deftly built using only massive transparent blocks of ice.

Visiting the ice temple is free. It is funded by the Tatra tourism organisation, the transport and construction ministry and other partners.
Only cold air and water are used to maintain the ice church.

"It is not only that visitors touch the walls of the temple, they also breathe out warm air and come in sipping hot tea," Kromka said.

When winter is over, the ice structure is smashed to pieces, the cooling system switched off and the ice carried outside to melt on the ground.
Open annually from November until late April, the ice temple is also becoming a hotspot for destination weddings.

"Here... we are perhaps the closest to our spiritual selves and our respective religions," says Veronika Littvova, head of tourism for the High Tatra region, much of which is pristine and protected national parkland.

She is also convinced that ice temple weddings lead to long, lucky unions.

"Thanks to that huge amount of ice, I believe that marriages entered into here will be preserved and last forever."