Indian women weave their way out of climate change woes 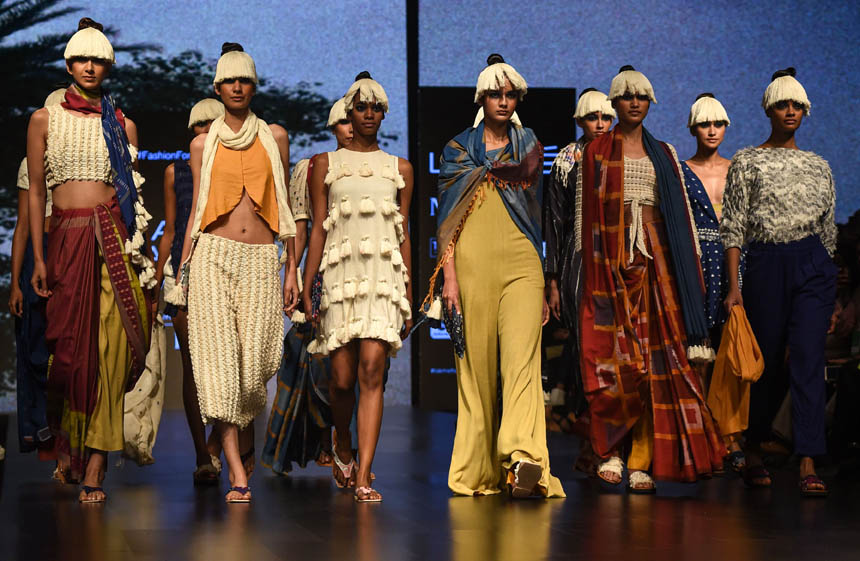 Indian models parade on stage as they wear clothes created by designer Sonam and Paras Modi at the Lakmé Fashion Week (LFW) Summer Resort 2019, in Mumbai on Friday.

SADIYA (India): In recent months, 30-year-old Niru Sonowal and a dozen other women from her northeast Indian village have trekked on foot for miles every day in search of work.

Once their chores are done, they set off at the crack of dawn from their homes in Tinsukia district in Assam state.

They return late in the evening after toiling in the mustard, ginger and garlic fields of the neighbouring state of Arunachal Pradesh, seeking to earn at least 200 rupees ($2.80) each day, said Sonowal.

Their daily slog contrasts with the lives of other local women benefiting from a push to revive weaving as a less taxing way to earn an income amid climate pressures on agriculture.

Less than a decade ago, Sonowal and her peers were happy homemakers, while their husbands tended to the fields outside, growing enough food for their families.

"We joined them too during sowing and harvest, raising plentiful crops that sustained us throughout the year,” said Mamoni Sonowal, another woman in the group.

Most are from smallholder farming families with less than one acre of land. But as the climate warms and rainfall becomes more unpredictable, they are struggling to survive.

A government study published in December found Assam to be the most vulnerable to climate change out of 12 Indian Himalayan states, with low incomes constraining people's ability to cope.

"The rains are erratic, insufficient or in excess - our agriculture is dwindling (and) getting more and more uncertain,” said Dulumoni Senapati, another village woman.

Many are experiencing unusual phenomenon in their fields, she noted.

"Last year when we went to harvest, I was asking everybody, 'Doesn’t the paddy feel lighter this time?’,” she recalled. No one took her seriously until they started de-husking the crop.

"There was no rice inside. It was only husk. All our hard work gave us nothing,” she said.

According to the International Rice Research Institute, higher temperatures can decrease rice yields as they can make the flowers sterile, meaning no grain is produced.

Several other villages in the area have experienced a similar problem, Senapati added.

With the mainstay of the local economy hit by the impacts of climate change, many men have left to work as labourers or security guards in distant Indian states, staying away for months.

But the work is irregular and low-paid, and they do not send back regular money.

That has left women bearing the brunt of managing their homes and covering daily expenses for their extended families.

FRUIT OF THE LOOM

The women of No. 1 Sonowal Village, which has about 80 households, say walking to the neighbouring state's border - about 8 km (5 miles) away - is the easiest option to scout for work.

The nearest town of Sadiya, the headquarters of their district, is about 40 km away, and they would need to hire transport to get there.

Groups of women from 25 to 30 remote villages in Tinsukia earn a living in the same way as farm workers.

But others in the area are getting help to cope with climate adversities more comfortably.

The North-East Affected Area Development Society (NEADS), an Assam-based nonprofit, has teamed up with the state sericulture department to revive the power of handlooms as a form of climate change adaptation.

"Weaving emerged as a natural livelihood choice for these women as they are traditionally skilled in this occupation. Almost each home has a loom,” said Tirtha Prasad Saikia, joint director of NEADS.

Amid the multiple demands on women to keep their families afloat, weaving had slowly been relegated to the background.

As an economic activity, it requires money for yarn and equipment, and time to produce the fabric - which local women had struggled to find alone.

NEADS is now working with about 2,500 women in 28 villages in Sadiya sub-division, organised into 20 weaving collectives.

The programme was launched in 2012 with a handful of women, after the area was hit by severe floods, destroying crops.

NEADS subsidised their purchases of yarn, upgraded their loom skills through expert training, and offered advice from designers on fashionable colours and patterns, said Saikia.

The three looms in her home are being used by her daughter, niece and sisters in the village.

Kalyani, her niece, worked with flamboyant yarn to make traditional Assam womenswear embellished with ethnic motifs. Each outfit takes 10 to 15 days to get ready and should fetch 2,000-2,500 rupees at the nearest market, she said.

The women weavers have now set up at least five collective yarn banks, by contributing in kind or cash, creating stocks of cotton to help poorer women in their villages.

Pranjal Jyoti Phukan, sericulture inspector for the Assam government in Sadiya, said about 500 women had each received a packet of 12,000-15,000 disease-free silkworm moth eggs.

They gather leaves from nearby forests or sericulture department plantations to feed the silkworms, and rear two varieties indoors at home, one of which can be bred year round.

The process from hatching eggs to cocooning, when the silk is spun, takes 30 to 45 days, said Phukan.

The cocoon is converted into silk yarn using reeling machines, with about 10 kilos of cocoon yielding 1 kg of silk, which can fetch 1,000-3,500 rupees depending on the quality.

NEADS has provided five reeling machines to the weaving collectives in the past three years.

The pupae inside the cocoons are rich in protein and can also be sold as food for 400 rupees per kilo.

Saikia said the weaving revival had reduced the number of women in participating villages who trek in search of daily wage labour by at least 35-40 percent in the past two years.