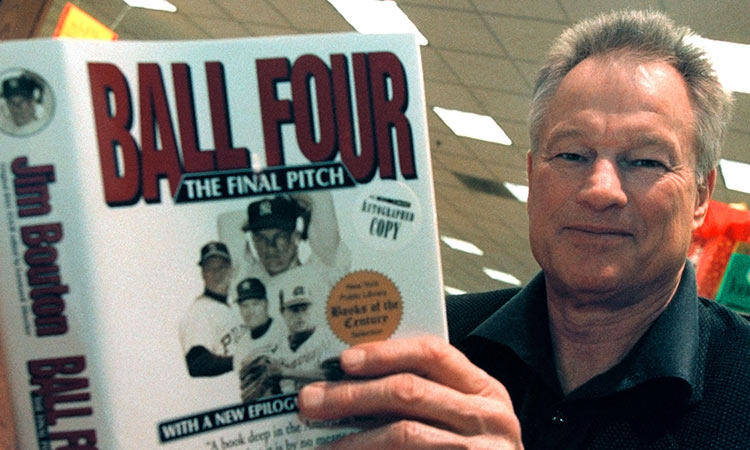 Baseball has inspired many a wordsmith to practice word-smithery of the highest order — Roger Angell in The New Yorker, Red Smith on a daily basis, Roger Kahn in “The Boys of Summer,” Bill James in his industry-changing Almanacs. Many recall John Updike more for “Hub Fans Bid Kid Adieu,” his reportage on Ted Williams’ final at-bat, as for his Rabbit Angstrom chronicles. Don DeLillo, maybe the greatest living writer, began his fin de siecle “Underworld” with an imagined recounting — Frank Sinatra, Jackie Gleason and J. Edgar Hoover are involved — of Bobby Thomson’s home run.

Bouton’s last big-league appearance, after nearly a decade of wandering in the minors, was as an Atlanta Brave at the shank of the 1978 season, when the Braves were wretched, and Ted Turner would do anything to get noticed. Ted signed Bouton, who was 39 and who went 1-3 with a 4.97 ERA. When he was 30 and a Seattle Pilot (later a Houston Astro), Bouton kept the diary that would, with the assistance of Leonard Shecter, become “Ball Four.”

It’s impossible for anyone who wasn’t of reading age when “Ball Four” was published to grasp what a commotion it caused. Excerpts ran in Look magazine. (Look was the competitor to Life; both are long gone.) When the book was released in June 1970, nearly every sports writer — I wasn’t yet one; I’d just finished my freshman year at Maysville (Ky.) High — in the land decried it. The famous Dick Young unleashed this gentle appraisal in the New York Daily News:

“I feel sorry for Jim Bouton. He is a social leper. His collaborator on the book, Leonard Shecter, is a social leper. People like this, embittered people, sit down in their time of deepest rejection and write. They write, oh hell, everybody stinks, everybody but me, and it makes them feel much better.” (And here you thought Michiko Kakutani was the most acidic New York book reviewer ever.)