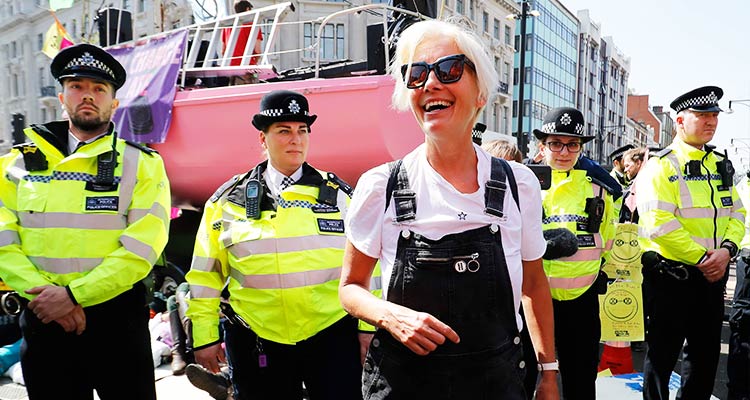 British actress Emma Thompson gestures as police surround the pink boat being used as a stage.

Organisers Extinction Rebellion have called for non-violent civil disobedience to force the British government to reduce net greenhouse gas emissions to zero by 2025 and stop what they call a global climate crisis.

The protests did not cause major travel disruption on Friday during one of Britain's biggest holiday weekends, but police said they have now arrested more than 682 people.

Extinction Rebellion blocked several locations in central London this week after staging a semi-nude protest in parliament earlier this month.

Police officers surround the pink boat being used as a stage by climate change activists including British actress Emma Thompson.n

Undeterred by over 400 arrests, climate change activists continued their demonstration into a fifth day in London with a small protest.

Thompson gives an address from the stage atop the pink boat to climate change activists .

"Our planet is in serious trouble," Thompson told reporters amid a crowd of about 300 activists, according to eye witnesses.

She addressed them from a pink boat in the middle of London's Oxford Circus as shoppers and tourists milled past.

She was one of several actors who read poems celebrating the beauty of nature.

The activists formed a human chain around the boat, with one attached to its main mast making it extremely difficult for the police to dislodge him.

After a painstaking operation, they removed him and secured the boat, but had difficulty transporting the vessel away because more protesters continually sat in their path.

"The serious disruption the demonstrations are causing to people in London and beyond is unacceptable and we completely understand the concern it is causing to those who are disrupted by it," police said in a statement.

"We are here in this island of sanity and it makes me so happy to be able to join you all and to add my voice to the young people here who have inspired a whole new movement.

Thompson's appearance followed a demonstration near Heathrow Airport earlier, where a group of around a dozen teenagers, some as young as 13 and 14, held a banner alongside a busy road which read: "Are we the last generation?"

Some of the teenagers wept and hugged each other, although they were far outnumbered by police.

"I fear for my future" Oscar Idle, 17, told Reuters at Heathrow. "That fear gives me courage to act."

"I want to live in a society which is not catastrophic, where there is not going to be food shortages, wild fires and hurricanes where people can live," he said.