India’s FM, PMO to focus on key sectors to push for growth, jobs 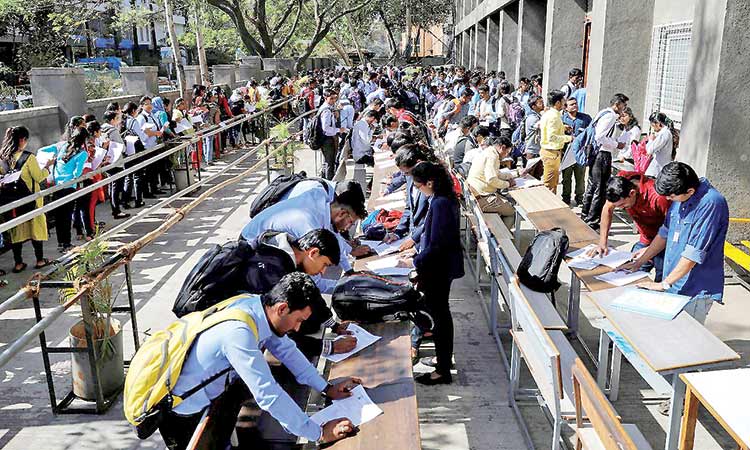 Job seekers fill up forms as others line up for registration during a job fair in Chinchwad, India. Reuters

Finance Ministry (FM) and the Prime Minister’s Office (PMO) will be extrapolating suggestions and consultations from experts, industry and citizens on sectors and segments that are in need of urgent attention in the Budget to help the economy recover from a 17-quarter low 5.8 per cent growth, and 45-year high 6.1 per cent unemployment rate.

Official sources said a more consultative approach is being followed by FM and the PMO over these issues to tackle the slowdown and higher allocations wherever needed will be provided over and above the what was provided in the Interim Budget.

Last week Prime Minister Narendra Modi appointed two new cabinet committees to tackle economy and jobs. A Cabinet Committee on Investment and Growth to suggest steps to push growth momentum in the economy and increase investment in key economic sectors like infrastructure and agriculture. The second panel, a 10-member Cabinet Committee on Employment and Skill Development is to explore ways to create more jobs.

The PMO has also sought proposals on key Measures For Budget 2019-20 and the ministries were asked to send issues on allocations for Budget. Union Budget will be presented on July 5.

The Housing for All by 2022, rural job scheme MGNREGA where more jobs could be included in the list, higher allocations for education and skilling are under special focus by Prime Minister’s Office. The Extrapolation would be on key areas where the focus would be more to create income and jobs and beat sectoral slowdowns − exports revival, higher requirements under Market Intervention Scheme, Price Support Scheme. food subsidy under National Food Security Act, investments in Financial Institutions, construction of Roads and Railways and National Rural Health Mission and Pradhan Mantri Jan Arogya Yojana, said the sources.

Looking at the job scene, the PMO’s importance could also be special funds to the Labour Ministry for offering incentives employers to offer apprenticeships and providing training to reskill existing workforce to meet industry demands. The road, highways and shipping as infrastructure sector will be provided for create assest and employment through PPP model in the Budget as it is a focus area for the PMO.

Finance Minister Nirmala Finance minister Nirmala Sitharaman has called a meeting of of leading industry chambers CII, Ficci, Assocham on June 11. Citizens have also been asked to send their comments by June 20. These chambers have already submitted their presentations on Budgets to the ministry.

The previous NDA government had presented an interim Budget and had announced on February 1 that major announcements will be made in the regular Budget.

The first session of the newly elected 17th Lok Sabha will be held from June 17 to July 26.

The Economic Survey for 2019-20 will be tabled on July 4, followed by the presentation of the Budget on the next day. In the Interim Budget it was announced that no tax on income up to Rs5 lakh where individual taxpayers having taxable annual income up to Rs 5 lakh will get full tax rebate, therefore, will not be required to pay any income tax. People with gross taxable income up to Rs6.5 lakh will have to pay no tax if they utilise the maximum benefit of Rs1.5 lakh available under section 80C. However, while increasing the amount of tax rebate under section 87A from Rs2,500 to Rs12, 500, there have been no changes proposed in the income tax slabs and rates in Budget 2019.

Meanwhile the stormy weather awaits India’s key equity indices, as volatility is bound to flare-up on concerns regarding a delayed Monsoon and upcoming macro-economic data points on industrial production and inflation.

Additionally, liquidity crisis in the NBFC sector will continue to pose as another risk factor for the market. “Investor confidence has again been shaken by signs that the crisis is spreading in the NBFC sector and mutual funds,” said D.K. Aggarwal, Chairman and Managing Director, SMC Investments & Advisors.

“Going forward, markets will also closely watch inflation data, which is due next week, and development of Monsoon amid other global factors such as trade war and US Fed’s meeting outcome, which is scheduled next week.” The Central Statistics Office (CSO) is slated to release the macro-economic data points of IIP and CPI (Consumer Price Index) from June 12.

Subsequently, other major macro-economic data points such as WPI (Wholesale Price Index), Current Account Deficit and Balance of Trade figures will be released.