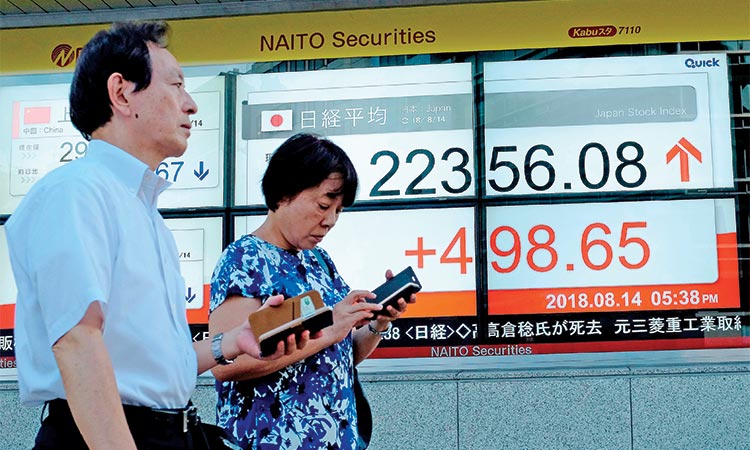 Its decision to give more specific policy guidance to financial markets comes amid signs that weaker global demand and Sino-US trade tensions are taking an increasing toll on the export-reliant economy.

The move puts the BOJ in line with the Federal Reserve and the European Central Bank, which have been forced to pause efforts to scale back crisis-mode policies due to heightening uncertainty over the global economic outlook.

“The BOJ intends to maintain the current extremely low levels of short-term and long-term interest rates for an extended period of time, at least through around spring 2020,” it said in a statement announcing its decision to keep policy settings steady.

Previously, the BOJ did not offer specifics on how long it would maintain very low rates, saying only that it would be “for an extended period of time.”

As widely expected, the BOJ maintained its short-term rate target at minus 0.1 per cent and that of long-term yields around zero per cent at its two-day meeting on Thursday. It also reiterated it will keep buying assets such as government bonds and exchange-traded equity funds.

“The fact the BOJ tweaked its forward guidance to include overseas economies signaled its caution over the economic outlook,” said Yoshimasa Maruyama, chief market economist at SMBC Nikko Securities.

“As the global economy slows further, the Federal Reserve could cut interest rates later this year or early next year. The BOJ may be forced into further easing around the same time.”

The BOJ said it decided to clarify its guidance to show its resolve to maintain powerful easing, as it was likely to take more time to hit its elusive 2 per cent inflation target.

In fresh projections released on Thursday, the BOJ slightly cut its economic growth and inflation forecasts.

It now sees growth of 0.9 per cent in the next fiscal year beginning in April 2020, down from 1.0 per cent projected in January but still above expectations in a recent Reuters poll of economists.

It also forecast consumer inflation would hit 1.6 per cent the following year, conceding that price growth will fall short of its target for at least three more years. Core inflation in March was 0.8 per cent.

The BOJ also announced steps to make its monetary easing framework more sustainable, such as expanding the type of collateral it accepts as collateral for supplying funds to financial institutions.

Slowing global demand and trade tensions have hurt exports and business sentiment, adding to headaches for BOJ policymakers who are clinging to hope that a pick-up in overseas demand will help Japan’s economy rebound in the latter half of this year.

In the quarterly report on the economic outlook, the BOJ stuck to its view that the economy will continue to expand moderately as a trend. But it said it would be vigilant to various uncertainties such as the effect of a scheduled sales tax hike in October and overseas economic developments.

Years of heavy money printing have failed to fire up inflation to the BOJ’s target and left it with little ammunition to fight the next recession.

Prolonged easing has also added to stresses on regional banks, already facing slumping profits due to an ageing population and an exodus of borrowers to big cities. Norio Miyagawa, senior economist at Mizuho Securities, said the fact the BOJ did not ramp up asset purchases showed it was aware of the growing side-effects of prolonged easing.

“The BOJ is worried that consumer prices may not rise even after risks posed by overseas economies recede,” he said.

“It’s saying it will continue to keep policy easy but there are limits to what more it can do, both in terms of duration and the kinds of tools available.”

Meanwhile, Japan’s Nikkei rose to 4-1/2-month high on Thursday as a bevy of corporate earnings turned out to be less bad than some investors had feared and selling ahead of the long holiday eased.

Some market players said sentiment was supported after the Bank of Japan said it would consider a scheme to lend some of its massive ETFs (exchange traded funds) holdings and pledged to keep current low rates at least until early 2020.

Hitachi Construction Machinery jumped 4.9 per cent on its earnings announcement.