Japan investors look to switch from Europe, flock to US bonds - GulfToday

Japan investors look to switch from Europe, flock to US bonds 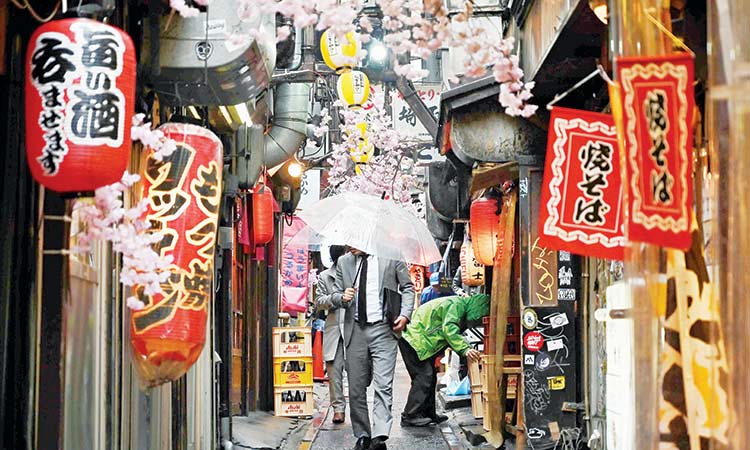 A view of the business district in Tokyo. Agence France-Presse

Japanese investors look set to switch some money from European bonds to US debt, hoping for capital gains after the US bond yield curve recently flashed signs of recession down the road.

While the jury is still out on whether the United States will have a recession, such fears were enough to sink bond yields to zero per cent in Germany and Japan, which face possible ones sooner than the world’s biggest economy does.

That has made the United States, the only major market where investors can expect further falls in bond yields, and hence gains in prices, market players say.

The government bond prices rose on Wednesday as a decline in Tokyo shares in the wake of escalating trade tensions between the United States and Europe boosted demand for government debt.

The Bank of Japan offered to buy 480 billion yen ($4.32 billion) of five- to 10-year bonds in a regular debt-purchasing operation, providing support to the broader market.

Japan’s Nikkei lost 0.7 per cent, dropping to a one-week low, after US President Donald Trump said he would impose tariffs on $11 billion of European goods.

“Concerns about a US recession are rising among investors we communicate with,” said Hiroshi Yokotani, portfolio strategist at State Street Global Advisors. “The US could slip into a recession or the Fed may try to stop it by cutting interest rates. Either way, bond yields should fall.”

Yokotani sees a shift to US bonds from European ones, as “investors are looking to capital gains as they expect yields to fall”.

For years, Japanese investors have sought refuge in foreign bonds, effectively kicked out of their domestic bond market by the Bank of Japan’s ownership of nearly half of it. Japanese are among the biggest players in the United States and Europe.

In 2018, European bonds were their favourite as German Bund yields rose to as high as 0.80 per cent and French yields above 1.0 per cent at one point.

On the other hand, US bonds were shunned despite their higher yields, as the cost of currency hedging, closely tied with dollar short-term interest rates, increased as the US Federal Reserve kept raising rates.

But the picture has changed as the spectre of a US recession added to growth concerns in Europe and Japan.

Germany narrowly skirted a recession at the end of last year while Japan’s economy contracted in two of 2018’s quarters and might have shrunk in January-March. But in contrast to the United States, where rate cuts are possible, neither the BOJ nor the European Central Bank have room to trim, with rates already below zero per cent.

In July, the BOJ is thought to have tried to reduce the side-effects on banks and other interest earners from its negative policy rates by expanding its bond yield target range.

But the measure seems to have backfired as 10-year JGB yields fell to two-year lows as economic prospects darkened, making JGBs even more unattractive.

“We don’t see much upside at all in being overweight JGBs. The yield is obviously incredibly low,” said Ross Hutchison, global bond fund manager at Aberdeen Standard Investments in Edinburgh.

The BOJ’s preferred policy framework policy is “very unlikely to lead to further cuts certainly in our investment horizon of three to six months or maybe even longer than that”, he added.

Against this backdrop, US bonds with yields of around 2.5 per cent seem a logical choice for investors worried the global growth could further slow.

For Japanese investors, as high currency hedge costs remain a drawback, higher-yielding corporate bonds and mortgage bonds are likely to be the main target for now, market players said.

Investors were spooked by last month’s inversion in US yields, when 10-year ones fell below 3-month rates. The phenomenon has been a highly reliable signal of coming recession over 50 years.

While the inversion later reversed, many investors want to stay in long-term US bonds.

Global share prices have recovered but earnings have not improved. And if you look at why bond yields have fallen in the first place, all the reasons - low inflation, low growth potential, dovish central banks - are still there,” said Akira Takei, fund manager at Asset Management One in Tokyo.