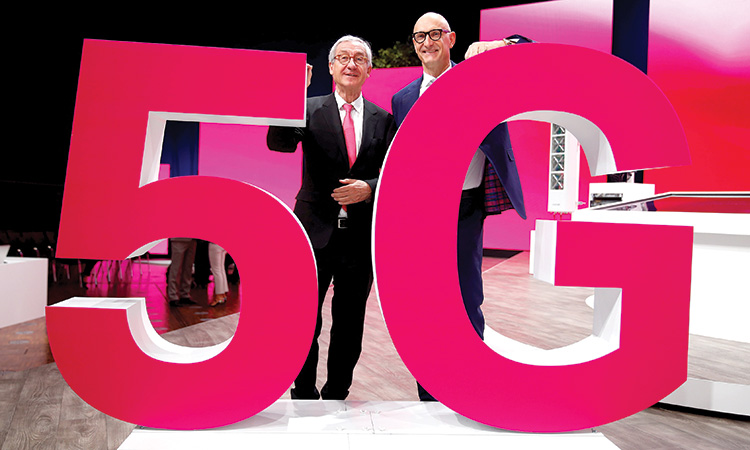 BONN: The way Germany’s 5G auction is being run is creating a shortage of spectrum that risks forcing up costs and leaving operators short of cash to build next-generation networks, Deutsche Telekom CEO Tim Hoettges said on Thursday.

“An artificial shortage of public resources is being created, which may push up the price,” Hoettges told the company’s annual general meeting in Bonn, adding: “In the end, there is no money for the build-out.”

German regulators have carved out a slab of frequency suited for use in high-tech ‘connected’ factories, and will allocate that on a regional basis directly to industrial companies later this year.

Four operators are, meanwhile, vying for a total of 420 MHz of spectrum in the 2 GHz and 3.6 GHz bands in an auction that started last week, with combined bids on Wednesday evening.

Industry analysts expect the amount raised at the open-ended auction - in which Vodafone, Telefonica Deutschland and new entrant 1&1 Drillisch are also taking part - to reach 3 billion euros or more.

A court threw out challenges filed by the operators to halt the auction. Litigation is still outstanding that could put the auction’s results to the test retroactively, the industry says.

Hoettges repeated earlier complaints about delays to winning local approvals to erect new telecoms masts in Germany, which can take two years or more, and urged the authorities to lighten regulation to encourage investment.

He also called for more infrastructure sharing, in which competitors can install antennas on the same towers, as a way to ease the cost of building out 5G networks.

“We build the mast, and others can use it to mount their antennas. Particularly in rural areas, where coverage gaps are still large,” he said.

The measures have been extended to 5G licensing rules for private companies, meaning Japan’s telcos are unlikely to use network equipment from the two Chinese manufacturers.

“We do not hope to see rising protectionism in countries like Japan that are supporters of free trade,” ministry spokesman Gao Feng told a regular briefing in Beijing.

The ministry had noticed that Huawei and ZTE’s business operations have suffered in Japan, he said.

“If Japan’s actions are unfair, that would shake mutual trust in both countries as well as the confidence of companies to cooperate, hurting bilateral relations,” he added.

Huawei has been facing mounting scrutiny, led by the United States, amid worries its equipment could be used by Beijing for spying. The company says the concerns are unfounded.

Last year, ZTE, the world’s fourth-largest telecoms equipment maker, was prevented from buying components from US firms in a crippling row over violations of export restrictions. ZTE resumed normal business after paying up to $1.4 billion in fines and replacing its entire board.

Bilateral ties between China and Japan have improved in the past year, with both sides expressing a desire to forge closer ties, both strategically and economically.

Meanwhile the Telecoms equipment supplier Ericsson is yet to see an increase in contract wins on the back of security concerns over China’s Huawei, the Swedish company’s chief executive said on Wednesday

The mobile network gear maker counts market leader Huawei and Finland’s Nokia as its main rivals and some analysts think it could benefit from Western suspicions of Huawei, after Washington alleged its gear could be used by Beijing for spying.

Huawei has strongly rejected the allegations and launched a lawsuit against the US government.

“What we see is that customers are worried,” Ericsson Chief Executive Borje Ekholm told Reuters ahead of the firm’s annual meeting at a venue close to its north Stockholm headquarters.

“And that of course leads to more discussions with customers for us, but we can’t see that contracts are being allocated. That has not happened yet.”

EU nations will be required to share data on 5G cybersecurity risks and produce measures to tackle them by the end of the year, the European Commission said on Tuesday, shunning US calls to ban Huawei across the bloc.