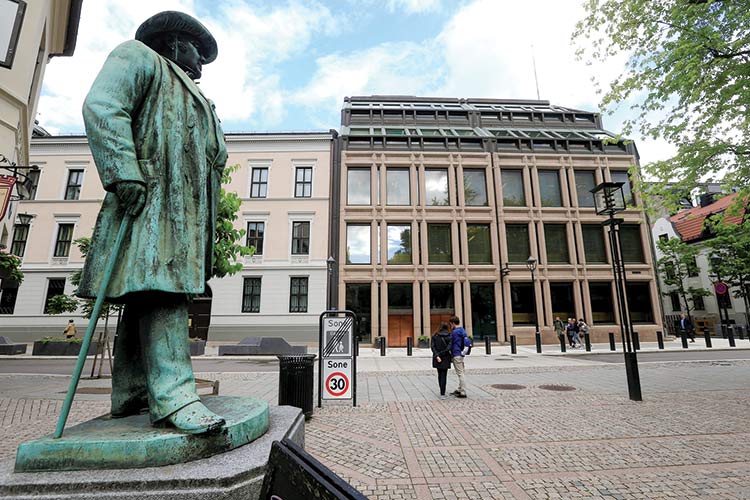 A general view of the Norwegian central bank in Oslo. Reuters

OSLO: Norway’s central bank (CB) raised its main interest rate on Thursday, as expected, and said its next hike may come earlier than previously planned, strengthening the crown currency against the euro.

The bank raised its key policy rate to 1.0 per cent from 0.75 per cent previously, in line with the forecast of 23 out of 26 economists in a Reuters poll.

Norges Bank’s approach stands in contrast to those of the US Federal Reserve, the European Central Bank and others in Europe, which are keeping rates on hold due to rising uncertainty about the prospects for the global economy.

“Our current assessment of the outlook and balance of risks suggests that the policy rate will most likely be increased further in the course of the next half-year”, said Governor Oeystein Olsen.

“The rate path shows a greater probability of a rate hike than of an unchanged rate in June,” he added.

Following the unanimous decision, Norway’s currency, the crown, surged over one per cent against the euro to trade at 9.6010 at 0913 GMT and was pushing towards its biggest one-day gain in over a year. “As expected Norges Bank hiked the key rate today. The rate path was lifted in the front and indicates the next hike already at the June meeting,” Nordea Markets analyst Joachim Bernhardsen said in a note.

Oil-rich Norway stands alone among other developed economies in tightening monetary policy, thanks to rising crude prices and higher-than-anticipated economic growth and inflation.

On Wednesday, the US Federal Reserve brought its three-year drive to tighten monetary policy to an abrupt end, abandoning projections for any interest rate hikes this year amid signs of an economic slowdown, and saying it would halt the steady decline of its balance sheet in September.

On Thursday, the Swiss National Bank kept in place its ultra-loose monetary policy, as anticipated by economists, and later in the day the Bank of England is also expected to announce unchanged rates amid continued uncertainty over Brexit.

Norges Bank raised its growth forecasts for 2019 and 2020 while predicting a sharper slowdown in the two following years, from 2.7 per cent expansion this year to just 1.1 per cent growth in 2022.

“How to balance global vs domestic factors? Front-load rate hikes in the path and take a wait-and-see approach regarding the long-end. Well done Norges Bank!” tweeted Erica Blomgren, fixed income strategist at SEB.

Meanwhile the Tesla has already delivered over 3,000 Model 3 vehicles in just a few weeks and it looks like it is putting pressure on other electric vehicles in the market, which was already dominated by EVs.

As we reported last week, Tesla Model 3 is already taking over several European markets and there’s no better example than Norway.

Norway releases almost live registration data and it shows that Tesla already delivered almost 2,500 Model 3 vehicles in the country in March – bringing the total to over 3,000 vehicles since starting deliveries last month.

It is launching Tesla’s deliveries to new highs in the country, which is already Tesla’s biggest market in the world per capita.

Here are Tesla deliveries broke down by models in Norway over the last two years (via Teslastats.no):

Last year, electric car sales grew by 40 per cent in Norway — 31.2 per cent of all passenger car sales were all-electric vehicles and when adding all plug-in vehicles, it increases to 49.1 per cent of the market.

Electric vehicles are already extremely popular in the country and now the competition is becoming tougher with Model 3 getting a lot of mindshare.

Nissan is responding by offering discounted interest rates for the Leaf. For the rest of the month, Nissan is financing the Leaf for just 0.25% (via Jim Roger Johansen):

The Leaf has been a top-selling electric vehicle in Norway for a long time, but Model 3 is expected to take the top spot by a wide margin this month.

More Model 3 deliveries are expected in the next few weeks and only the two higher-end versions of the vehicle are currently available.

Tesla is expected to start selling the 2 other less expensive versions of Model 3 in Europe in the coming months.

That’s what I like to see. Automakers are not putting a lot of weight behind their electric vehicles right now, especially when it comes to advertising. I think we are going to see this change with increased competition and Tesla flooding the market with Model 3 vehicles will bring a lot of that.