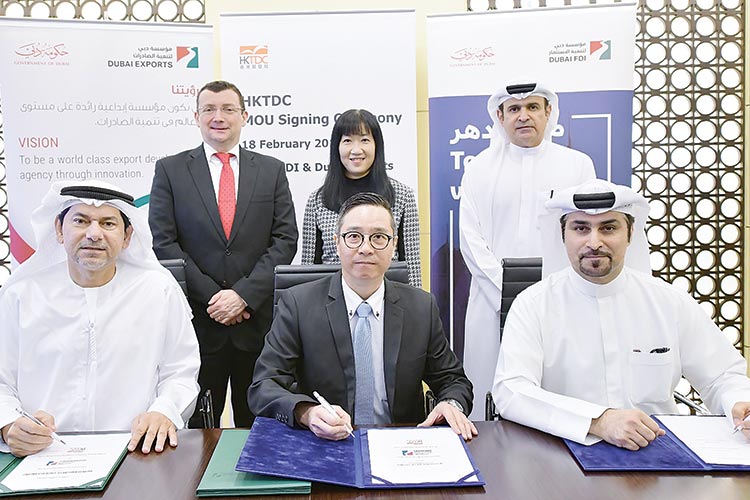 Dubai: In line with the efforts to intensify investment and economic relations between two leading global business hubs, top level officials from the Department of Economic Development (DED) in Dubai and Hong Kong Trade and Development Council (HKTDC) have signed new agreements during a strategic meeting, which was held recently in Dubai.

The signing ceremonies were followed by a roundtable discussion led by DED and its agencies Dubai FDI, Dubai Exports and Dubai SME.

Dubai FDI, the investment development agency of DED, has signed a Memorandum of Understanding with HKTDC as part of its continuing efforts to boost investment and economic relations with major cities in the world and increase business relations on strategic sectors, while Dubai Exports renewed its existing MoU with the Council.

Al Qamzi said, “Dubai’s continuing efforts to expand its network in Asia and the Pacific has made new progress with both Dubai FDI and Dubai Exports signing MoUs with HKTDC. These efforts reflect our proactive approach and commitment to collaborating with major projects in Hong Kong and China. Hong Kong remains one of the most active investment players in Dubai in major industries, particularly in real estate.

According to the Dubai FDI Monitor, total FDI capital inflow from Hong Kong to Dubai reached $75 million (Dhs275 million, approximately) between 2015 and 2018, with a total of 13 ongoing projects.” The MoU was signed to accelerate the cooperation efforts between both parties in key sectors, particularly in increasing engagement on the Belt & Road Initiative.

Dubai FDI and HKTDC also agreed to cooperate on trade and economic information sharing; provide support by facilitating network platforms for companies keen to expand business in both markets; and extend support and assistance to visiting delegations seeking for trade, investment and economic cooperation.

CEO of Dubai FDI noted, “Dubai and Hong Kong share many common economic interests, which we look forward to further explore in right earnest following the signing of the MoU and the growing engagement between Hong Kong investors and Dubai.

Among the projects we believe deserve more attention is the Belt & Road Initiative, a development strategy that will catalyse economic opportunities regionally and globally. We are confident that the MoU is an opportunity for leading businesses in Dubai and Hong Kong to forge stronger ties and thereby contribute to accelerating progress across Asia and the Middle East.”

Through renewing its partnership with HKTDC, Dubai Exports is seeking to further leverage the strong capabilities of both cities as trade hubs. The two sides will work on key projects such as joint events in both regions, exchange of information, support to exporters and buyer facilitation through a range of initiatives under a three-year plan.

CEO of Dubai Exports commented, “Continuing on our Look-East strategy, Dubai Exports is delighted to renew our strategic collaboration with HKTDC to further explore both Dubai and Hong Kong as respective trade hubs for the Middle East and China to serve the larger regions. Joint events in both regions, exchange of market/business intelligence, on-the-ground support and exporter/buyer facilitation are expected get an impetus with new initiatives planned by both parties in our new three-year plan. Businesses in Dubai are particularly urged to take advantage of the collaborative services provided by us to grow their trade in the vast Chinese market.”

Regional Director, Middle East & Africa of HKTDC, Dubai Office said, “Our co-operation with Dubai FDI is envisaged as a strategic Hub-to-Hub collaboration between two of the world’s most competitive economies, in fostering FDI deals, not only in Dubai but through Dubai to the Greater Middle East and Africa regions, and at the same time supporting Dubai business entities to penetrate the Belt & Road Markets, especially in Asia.”

The latest data from Dubai FDI Monitor shows real estate, rental and leasing has attracted the largest share of investments from Hong Kong - $30 million, or 40 per cent of the total FDI capital. Warehousing & storage, finance & insurance, retail & wholesale trade, and advertising, PR & related activities are the four other top-ranked sectors in attracting FDI from Hong Kong.