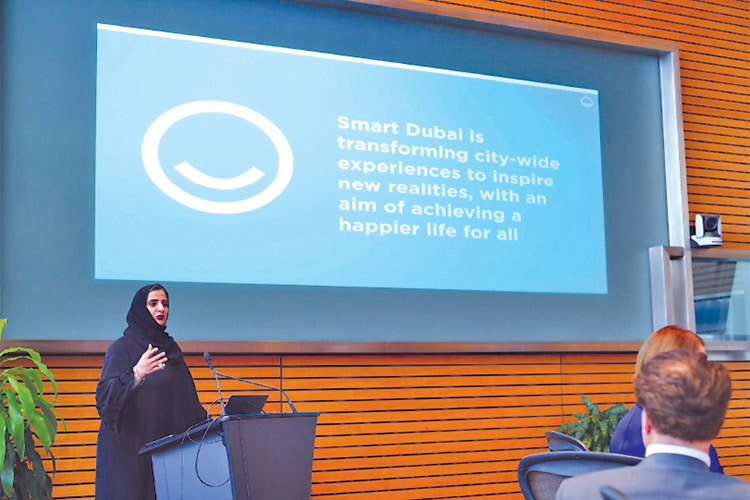 Dr Aisha Bint Butti Bin Bishr speaks during the World Bank event in the US.

The strategy will see the Dubai Government go completely paper-free by 2021, eliminating more than one billion pieces of paper used for government transactions every year, and improving happiness levels for staff and citizens alike - saving time, resources, and the environment.

“Smart technology has firmly established itself as the engine driving the cities of the future, transforming human communities and activities - from the most mundane of tasks to the most complex,” Dr. Aisha noted.

“Dubai is on a quest to become the world’s smartest and happiest city, and has, to that end, taken a proactive approach and launched the Smart Transformation Agenda, embodying the ambitions of His Highness Sheikh Mohammed Bin Rashid Al Maktoum, Vice President, Prime Minister and Ruler of Dubai.”

The Dubai Paperless Strategy, launched in February 2018, she said, marked a significant milestone on the emirate’s smart transformation journey. The strategy seeks to transform the Dubai Government into a fully digital administration, transferring all applicable transactions to digital platforms by the year 2021.

She also underlined the strategy’s success as six government departments cross the halfway mark in the shift away from paper, cutting their consumption by an average of 57 per cent as the first phase of the Dubai Paperless Strategy drew to a close at the end of 2018.

“We, at Smart Dubai, are always on the lookout for opportunities to share our success and learnings in smart city transformation and learn from like-minded organisations and individuals, and with that in mind, were delighted to have the opportunity to showcase our progress here at this knowledge-sharing event, organised by the World Bank Group,” Dr. Aisha said.

For her part, Zeina El Kaissi, Head of Emerging Technology and Global Partnership at Smart Dubai, covered the Dubai Blockchain Strategy, which is designed to help Dubai become the world’s first city to be fully powered by Blockchain by 2020, using three strategic pillars: Government Efficiency, Industry Creation, and International Leadership. The two presentations were followed by a Q&A session focusing on the lessons learned in operationalising emerging technologies for digital transformation.

“Since the year 2000, more people have lived in cities than in rural environments. With the rise of homo urbanus in so many ways the world’s cities and city-states, like Dubai, have become the proving grounds for how our governance models, technologies and the economic updraft that has failed so many, adapts. Driving Smart Dubai’s vision is the right combination of political leadership and a whole-of-government strategy, which breaks down siloes and pet technology projects, while putting the citizen first,” Dr. Aisha added.

She also said that on the face of this citizen, Dubai wants one thing - a smile, a vision enshrined in Sheikh Mohammed Bin Rashid Al Maktoum’s commitment to making Dubai the happiest city on earth. This vision is captured by a veritable happiness meter available as a smart phone application recording citizen sentiment in real time and in a transparent dashboard.

The measure of success for Smart Dubai and the billions spent on digital transformation is a rather tenuous metric of improving citizen happiness. There is a powerful if counter-intuitive subjectivity in this goal. One which other countries, cities and, indeed, businesses could borrow from for its simplicity and for its power of shifting outcomes and measures of satisfaction back to the granular, non-institutional level.

Dr. Aisha reminds the world’s public servants and political leaders that they too are beneficiaries of citizen services. The lack of trust, inefficiency and friction that plagues most of the world’s citizen services is not only costly, averaging 26 per cent of GDP globally, it its leaving billions of people behind and trillions in economic opportunity stranded on the sidelines in spirit-eroding bureaucracy. Not to mention the ever-present risks of corruption, bribery and fraud thrive under the cover of darkness and the one-sided information systems, which are the standard operating procedure in most governments around the world. In no small measure, this popular frustration is showing up in some deleterious ways and few countries or cities are being spared from the consequences.