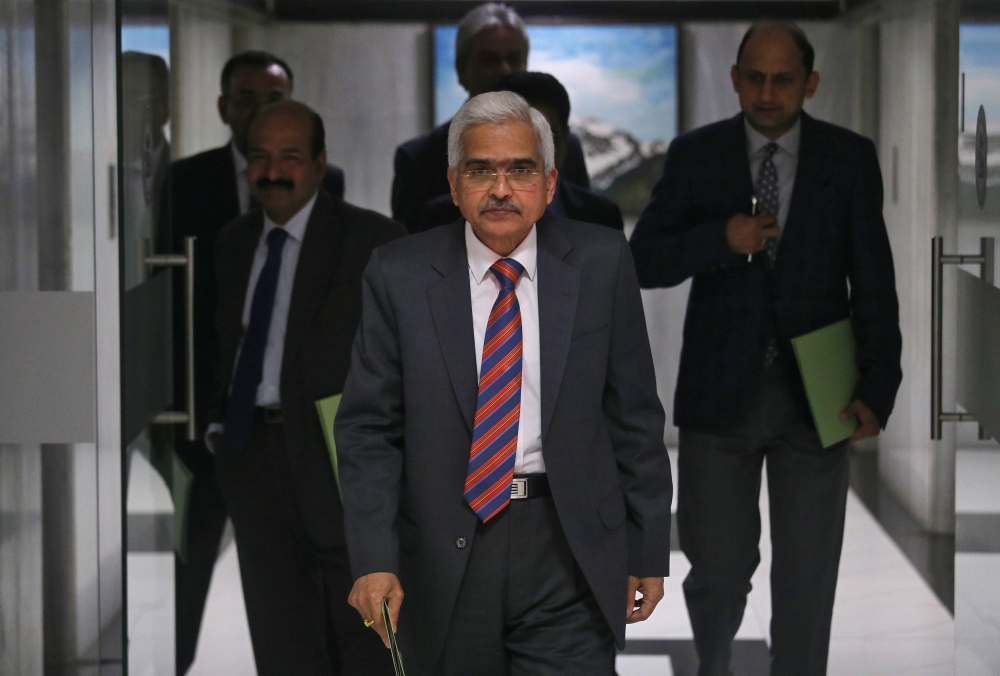 The Reserve Bank of India (RBI) Governor Shaktikanta Das arrives to attend a news conference after a monetary policy review in Mumbai, India, on Thursday. Reuters

The cut in borrowing costs in Asia's third-biggest economy comes as the economy stutters and other central banks, most notably the Federal Reserve, have sounded increasingly cautious about the global outlook.

The Reserve Bank of India (RBI) said the benchmark repo rate − the level at which it lends to commercial banks − would be reduced by 25 basis points to 6.25 per cent.

It marked the first interest rate decision under new bank chief Shaktikanta Das, an ally of Modi who was appointed in December after his predecessor, Urjit Patel, quit following a public spat with the administration over alleged government interference.

The government was believed to be unhappy with the RBI over a number of issues, including its apparent reluctance to cut rates to stimulate the economy.

India's finance ministry had reportedly been pressuring the bank to enact policies to help spur growth ahead of the elections due by May, when Modi will run for a second term.

On Wednesday, a key economic advisor to Modi called on the RBI to announce a cut to help boost consumption and investment.

Modi was swept to power in 2014 on a business-friendly manifesto that promised to shake up India's economy and boost jobs.

He announced a number of high-profile policies, including the introduction of a new single tax on goods and a controversial currency ban.

But data have raised questions about how successfully he has delivered on his pledges and polls suggest he faces a tough re-election fight.

Statistics showed the economy expanded only 7.1 per cent on-year in July-September, down from 8.2 per cent in the previous quarter.

Analysts say India needs to regularly record growth of at least eight per cent to generate employment for the millions entering the workforce each year. But a government report leaked last week showed unemployment at a 45-year-high of 6.1 per cent in 2017-18.

Thursday's cut, which was the first in 18 months, surprised the majority of analysts who had expected rates to be held. Thirty-two out of 43 economists surveyed by Bloomberg News had predicted no change.

Despite the cut the rupee edged up 0.1 per cent against the dollar.

The RBI raised rates twice last year over concerns about rising prices but with inflation currently at an 18-month low the bank said it was time to opt for a reduction.

"Headline inflation is projected to remain soft in the near term reflecting the current low level of inflation and the benign food inflation outlook," the bank said in a statement.

India's retail inflation declined from 3.4 per cent in October 2018 to 2.2 per cent in December, well below the bank's target of four per cent.

Central banks around the world have turned more dovish in recent months as they grow concerned about the state of the global economy, the China-US trade war and China's economic malaise.

The Fed has indicated it will slow its pace of rate hikes this year, having raised them four times in 2018, the European Central Bank has indicated that it is not looking to move on rates and the Bank of Japan has again lowered its inflation forecasts.

The Reserve Bank of Australia, Bank of Korea and Bank of Thailand have also tempered their outlooks in recent weeks.